10% more seats (including an A380 flown in by Emirates) were offered by airlines to Barcelona last week in anticipation of the largest ever Mobile World Congress, the ultimate feast for the mobile technology industry, which welcomed 67,000 visitors in 2012. Vueling, Barcelona’s based carrier, increases its weekly seat offering by 11% this summer. Services to London Gatwick were announced last autumn by the airline’s CEO, Alex Cruz and President, Josep Piqué; as well as the Catalan Government’s Artur Mas and Lluís Recoder.

Europe’s trendiest city break destination for the best part of the last decade, Barcelona is crammed with stunning architecture, sublime art, world-renowned gastronomy and nightlife, all finished off with miles of golden beaches stretching along the Mediterranean coast. Located only about two hours’ flying time from the British capital, it has long attracted Londoners craving the best of both worlds and, while Barcelona showed an overall passenger traffic growth of 2.2% in 2012 (compared to average decline of -5.5% at Spanish airports), the market from London produced an outstanding increase, not only recovering the all-time high of 2007, but improving on it by 16%.

Examination of CAA data shows that in the years preceding the recession, traffic in the market from London to Barcelona was growing at an average of 1.2% (2002-2007), reaching its peak of 1.8 million in 2007. Although the full-blown effects of the Spanish construction industry crisis and the financial misfortunes of the City of London were not fully felt in 2008, when traffic diminished by 2.5%, it did materialize in the following two years: traffic fell by 12.8% and 11.3% respectively, to produce total passengers of 1.4 million – a market size last observed in the 1990s. Notably, October 2009 saw the departure of Iberia, the Spanish flag carrier, from the market. Disappearance of the carrier’s four-weekly services to London Heathrow were partly offset by its IAG partner, British Airways, which stepped up its frequencies from also four-weekly to daily. 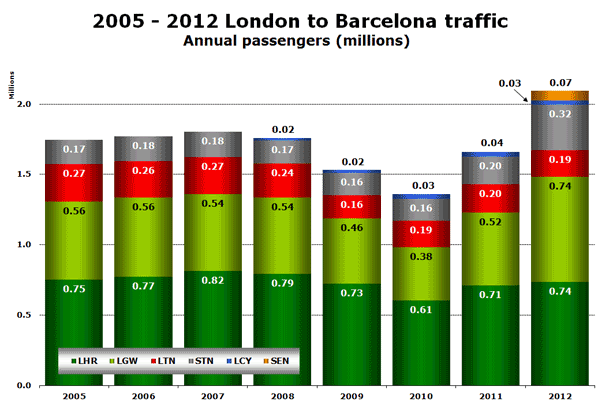 2010 was the turning point for traffic recovery in the market, and in 2011 traffic figures showed an improvement of 22%, followed by 26% growth in 2012. A total of 2.1 million people travelled on the route connecting the British and Catalan capital last year.

All six London airports have now links to Barcelona, with London Heathrow and Gatwick almost equally sharing two thirds of the traffic. The latter has however experienced more dynamic traffic growth in the last two years (37.7% and 43.7% respectively in 2011 and 2012, compared to 17.2% and 3.9% for Heathrow), a trend which is set to continue in 2013. The only airport to outdo Gatwick in terms of passenger growth last year, albeit starting from a considerably lower base, was London Stansted (64%). Two other London airports, City and Luton, saw traffic decline respectively by 10.8% and 5.2%, while easyJet’s launch of daily services from London’s latest airport last April, led Southend to account for 3% of the total traffic in the market in 2012.

Weekly average capacity data for the market in June 2013 shows some interesting capacity shifts within the London airport system. In S’12, two main airports to offer services to Barcelona, London Gatwick and Heathrow commanded respectively 35.6% and 34.6% of the total seat capacity in the market. This proportion is no longer valid for S’13, as Gatwick will see an increase of almost 70%, while the capacity offered (entirely by British Airways) from Heathrow decreases by 3.3%. Gatwick’s growth is fuelled by the launch of thrice-daily flights by British Airways this week, which now serves Barcelona from three London airports, as well as by new entrants to the market – Vueling (twice-daily launching 23 March) and Norwegian (thrice-weekly launching 4 April). 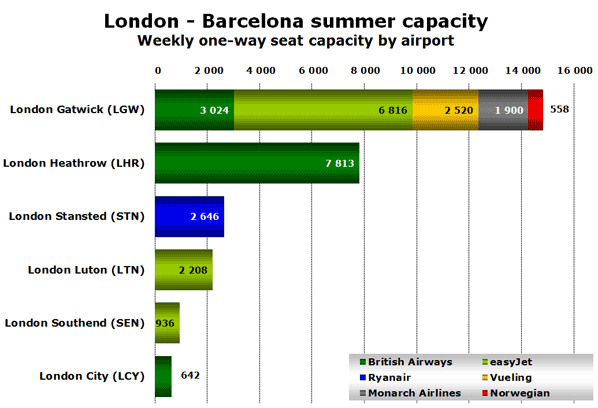 London Stansted will lose a third of its Barcelona capacity in S’13, as easyJet withdraws its daily schedule. The carrier will also reduce capacity to Barcelona from London Southend, down to six weekly from daily. No changes have been reported neither for London Luton, where easyJet continues to provide twice-daily frequencies, nor for London City, which has a daily British Airways service. 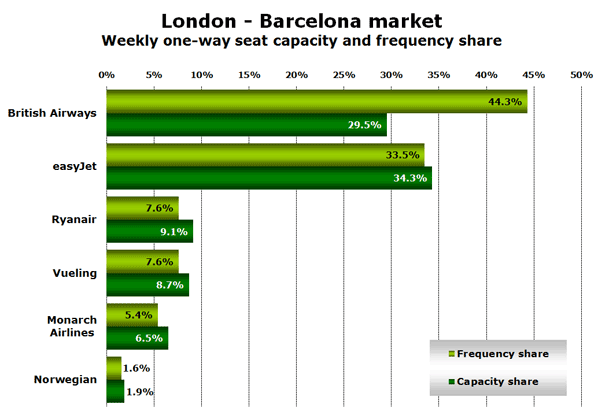 In S’13, 78% of weekly frequencies and 64% of weekly seats in the market from London to Barcelona will be offered by only two carriers, British Airways and easyJet, which both serve the Mediterranean city from three London airports. British Airways will offer 30% more frequencies and 21% more seats in the market in June 2013 compared to the same period a year before, while easyJet reduces its offering respectively by 11% and 13%.

Once it launches its new route, Vueling will match Ryanair in terms of frequency share, even though it will provide marginally less capacity in terms of weekly seats. At the same time, Monarch Airlines removes one of its 11 weekly frequencies from London Gatwick. Norwegian’s entry to the market is set to have a limited impact as the airline will command less than 2% of weekly frequency and capacity.

Early January saw the opening of the missing high-speed rail link between London and Barcelona, and the overland journey can now be completed with two stops (in Paris and Figueras) in around 10 hours. With prices from under £200 for a return journey and the growing trend toward slow travel, the rail offering might attract some traffic away from airlines, especially during peak summer months, when one-way fares can exceed £200. However, Barcelona’s appeal as a weekend break and business destination suggest that this enhanced rail offering should not have a major impact on air traffic, unlike in the case of the introduction of high-speed connections on shorter distances.