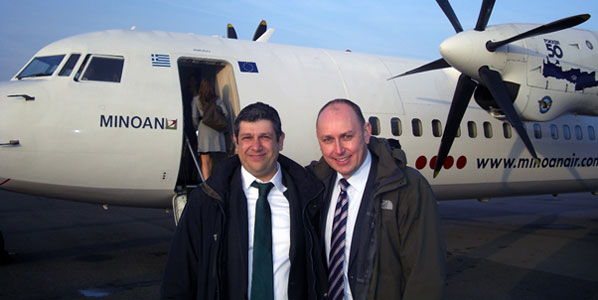 Like all good route launches, it was early, it was cold, the skies were blue and there was a cake! Minoan Air’s CCO Marcos Caramalengos (left) was there to celebrate the launch of the airline’s operations from London Oxford Airport to Edinburgh on 4 March with anna.aero’s Editor Marc Watkins.

anna.aero: Why London Oxford to Edinburgh and Dublin?

Caramalengos: Despite being just 40 minutes from London, Oxford has its own distinct catchment which is the market that we are looking to target. From the data we looked at with the airport management, we identified Edinburgh and Dublin as having some of the highest levels of demand from this area with a good mix of business and leisure traffic. The market size also matched the right level of frequency for these routes with our type of aircraft. Convenience was also a key factor – uncongested facilities, short check-in times and quick access for the passengers to the aircraft to ensure fast turnarounds. These are important if you are trying to extract a slightly higher yield than the norm.

anna.aero: How are bookings going?

Caramalengos: Let’s just say that they are where we expected. We started marketing the routes later than we wanted to, but we know for the majority of people on these types of service, particularly the business person, that they book in the last 14 days before travel. However, we are beginning to get the message out there to the people of Oxford – we are sponsoring buses, doing adverts in local newspapers, and on local radio as well as on-line. We have hired a marketing executive, based in Oxford to work with the local travel trade, corporates as well as tourism entities like Visit Scotland.

anna.aero: Where next from London Oxford?

Caramalengos: Firstly, from the 10 May, we will increase frequencies on Edinburgh and Dublin, both up to twice daily during the working week, with a Sunday evening rotation as well. We are also evaluating a number of routes in Europe from London Oxford, although we have no concrete plans at the moment as we want the new routes to have 100% of our attention for the time being. Top of the list would be Copenhagen or Amsterdam; but phase two of our plans are not expected until 2014.

Caramalengos: We manage to combine good value fares (lead–in, one-way fares on London Oxford-Edinburgh start at £51 or 59 euros including taxes) with things the business traveller expects – fast, reliable, on-time air travel with complimentary food and drink on-board. It’s quite simple really (anna.aero can confirm that even with all the added complications of a launch flight, the initial departure from London Oxford left on time – well within 15 minutes of the scheduled time – and arrived on-time in Edinburgh. Push-back at Edinburgh was bang-on schedule, as was the arrival in London Oxford).

anna.aero: You are planning a similar type of operation at Lugano as well?

Caramalengos: That’s right. There are a lot of synergies between what we are trying to achieve here at London Oxford and those we observe in Lugano. The convenience of the airport facilities is the same as we have here at our UK base. We begin daily Fokker 50 operations to Rome Fiumicino on 29 March, as well as three times per week to Vienna.

anna.aero: Who is funding your current expansion?

Caramalengos: There are a couple of Greek venture capitalists behind Minoan Air who understand that the start-up phase for airlines is always going to be tough going. We are flying these new routes from London Oxford and Lugano at 100% risk for Minoan Air, so they are aware of the numbers and confident the management team will deliver. They are also fully backing our plans to increase our fleet of Fokker 50s up to six later this year.