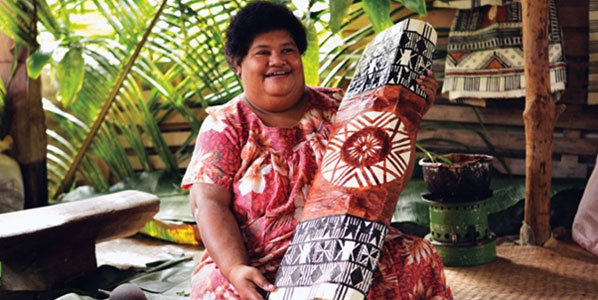 Designed by local Masi artist Makereta Matemosi and representing spirituality, consideration for others, and Fijian hospitality, the traditional i’Taukei circle will act as a centerpiece for the Fiji Airways’ logo, the new name and brand which will be adopted by Air Pacific this June.

2013 is set to be a year of considerable change for Air Pacific. In April, it begins its long-haul fleet replacement as it receives the first of three A330-200s it is planning to receive over the next 12 months, and finally seeing the departure of its two 25-year-old 747-400s. In June, Air Pacific will cease to exist, only to be re-born on the same day as Fiji Airways – the name it operated under between 1951 and 1970 – when the airline changed to its current name. anna.aero is already looking forward to 2032, when the carrier will rebrand again to Air Pacific (not really). 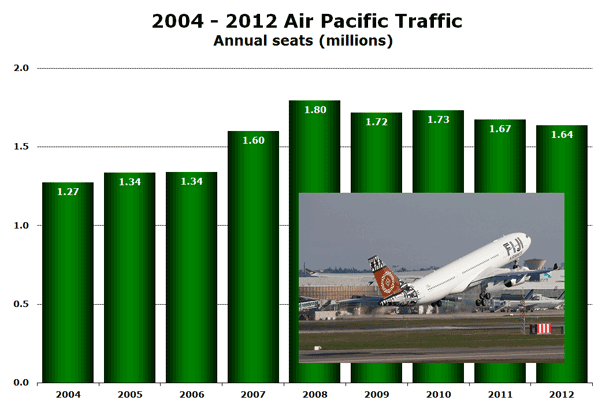 Having undergone a period of rapid growth earlier on in the decade, growing by over 40% between 2004 and 2008, annual seats offered by the airline have remained relatively flat since 2009, fluctuating around the 1.7 million mark. However, long- and medium-haul traffic has been restricted since January 2012, when the carrier released its single 767-300, and since then it has been relying on the 747s and its four 737s while waiting for the arrival of the Airbuses to deliver any substantial growth. The delivery of the A330s will result in increased frequencies to Sydney (up to 17 weekly in peak December period), Melbourne (up to six weekly in peak), Hong Kong (up to thrice weekly in January 14), and Los Angeles (up to daily from November) over the next 12 months.

At nearly double the size of its nearest competition, New Zealand, Australia is by far the most important country market for Air Pacific. In April 2013, the airline will operate 25 weekly services to its three Australian destinations; Sydney (13 weekly), Brisbane (7) and Melbourne (5), in comparison to the 12 flown to its two points in New Zealand, Auckland (11) and Christchurch (1). 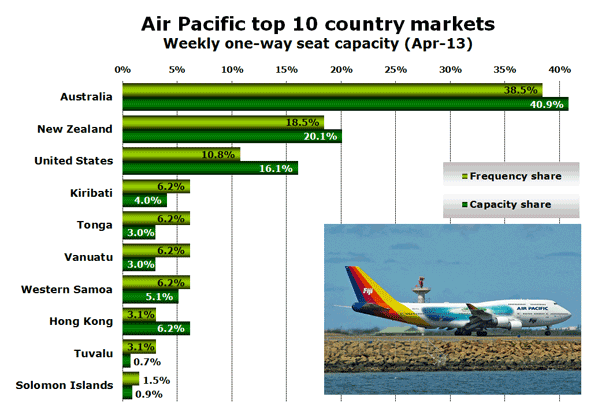 Just to prove that the airline has been marking time awaiting its A330s, seven of the top 10 country markets have not seen any change in weekly capacity between April 2013 and April 2012. However, the big two markets of Australia and New Zealand will see marginal growth of 5% and 4% respectively. This April, Melbourne will increase from four to five weekly 737-800 flights versus April 2012, Brisbane will see the new A330 on one of its daily services, replacing a 737-800 rotation, while Auckland has seen an additional 747 rotation instead of a 737-800 flight. The largest annual growth has been reserved for Port Vila, the capital of Vanuatu, which has seen a 14% spike in capacity over the 12 months being analysed, thanks to a new weekly ATR-42 service, adding to the existing thrice weekly 737-800 operation.

Overall, the number of domestic seats offered by Air Pacific has increased by 3% in the period between April 2012 and April 2013. Nadi has the biggest airport in Fiji, and indeed it is the primary international gateway, and it also commands the most significant share of the top 12 domestic routes, putting Suva, Fiji’s capital, into second place. The 120 kilometre connection between the two cities on the main Viti Levu Island is the busiest domestic air route, more than double the size of the capital’s connection with Labasa, the main town on the island of Vanua Levu. 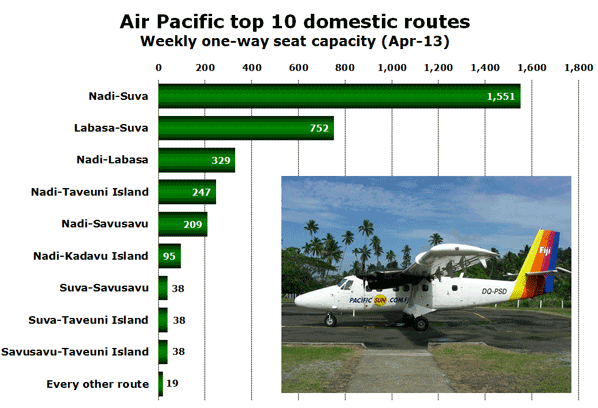 All of the domestic flights are operated by Air Pacific’s subsidiary carrier Pacific Sun, which operates a fleet of ATR-42s and DHC-6s on inter-island connections. The five remaining routes in Pacific Sun’s domestic network (not detailed in the chart) all receive just a single weekly, 19-seat DHC-6 operation. With more tourists likely to be arriving in the islands over the next year, courtesy of Air Pacific’s new long-haul kit, many of its partner’s domestic routes may well benefit from increased frequencies as holidaymakers spread out across these beautiful isolated Pacific islands.