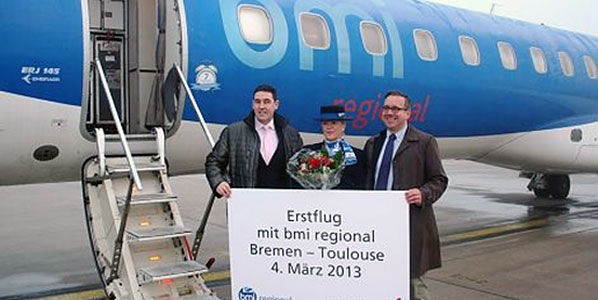 One of eight routes that will be launched by bmi regional in 2013, catering mainly for Airbus employees, is airline’s new Bremen-Toulouse service. CEO Cathal O’Connell says: “Independent ownership allows us to be more opportunistic and make decisions quickly,” allowing it to react swiftly following former operator OLT Express Germany’s demise on the route in January.

Standing on its own as an independent carrier since 1 June 2012, when it was sold by IAG (who only owned it from 1 April that year) to Sector Aviation Holdings, bmi regional has wasted no time in assessing its network and quickly making the decision to cull those routes not making a contribution and to redeploy its assets (a mixed fleet of 18 ERJ-135s and ERJ-145s – 80% of which it owns) on new opportunities, predominantly in the UK, but also in mainland Europe. “We inherited a route network that was built around feeding Star Alliance hubs,” says airline CEO Cathal O’Connell. “Since we took over we have been in a phase of adapting the network, focused on improving the fleet productivity and placing the seven aircraft which came off wet-lease at the end of the summer 2012 season (five operating British Airways/bmi routes and two operating for Brussels Airlines). Our eight routes launching this summer have all been chosen by the new management team using a different strategy than bmi regional had previously operated to.”

New routes must have at least one city beginning with “B”

The results of this first phase in bmi regional’s rebirth has been a flurry of new services, including re-instating the Bremen-Toulouse route launched this week, largely as an Airbus corporate shuttle service, replacing the now defunct OLT Express Germany’s operation which stopped in January 2013. “This shows just how nimble and flexible we can be as a stand-alone airline,” adds O’Connell. “We’re still definitely interested in working with flag carriers on routes that fit our business model and aircraft type, but independent ownership allows us to be more opportunistic and make decisions quickly.”

He continues: “All of the routes we have selected have an underlying corporate demand, but on all the routes there is also the possibility to attract leisure traffic too. We’ve done our homework.” Indeed, the carrier is already evaluating adding Saturday and Sunday rotations on its Bremen-Toulouse service to cater more effectively for both market segments.

Ad-hoc charters have become an increasingly important revenue stream for the carrier. “During the winter, we had spare unallocated capacity, which we used to cater for this market,” says O’Connell. “As a result of the success, we have allocated more capacity to this segment than was historically done in the past by bmi.”

Looking at its May-13 schedules, only five of its 24 routes are competed, which would seem a reasonable recipe for long-term survival. It faces long-time adversary flybe on four routes, including Birmingham-Lyon, as well as on Manchester-Edinburgh (flybe operates 30 flights per week), and on Manchester-Aberdeen (23). The last of these is in indirect competition, as flybe is the operating airline for Brussels Airlines on Edinburgh-Brussels (12). The final route where bmi regional has competition, in this case against two airlines, is on Edinburgh-Copenhagen where its faces LCCs Norwegian (5) and easyJet (4). 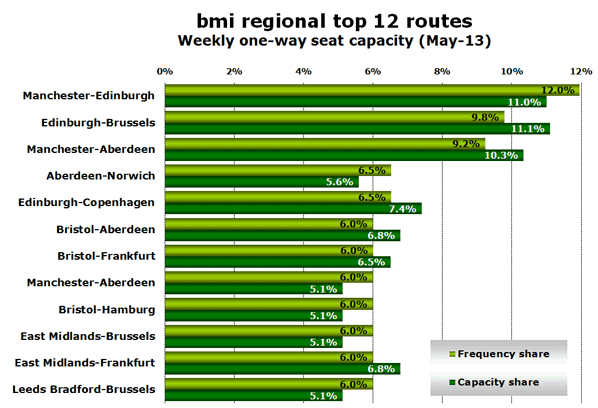 All of the airline’s top 12 routes boast at least 11 weekly frequencies – offering the business passenger, as a minimum, the critical early morning flight out and evening return, plus a weekend rotation. It is this type of schedule on bmi regional’s biggest routes which the airline hopes will also deliver the yields needed to sustain its regional jet fleet. So despite many airlines having completely replaced their respective regional jet fleets, O’Connell remains positive about this segment. “There are still plenty of route development opportunities in the UK and across Europe for an airline with our operating model and aircraft type. Some of these are new and others have come about by the demise of carriers with similar sized aircraft such as OLT and Skyways.”

Report card: could do better

The airline became completely independent at the end of S’12 season, when all seven of the aircraft operating agreements with British Airways/bmi and Brussels Airlines came to an end. Looking at the latest publically available data, the impact of these deals ending on bmi regional’s load factors was immediate, however November is never likely to be the #1 for load factors for most airlines. 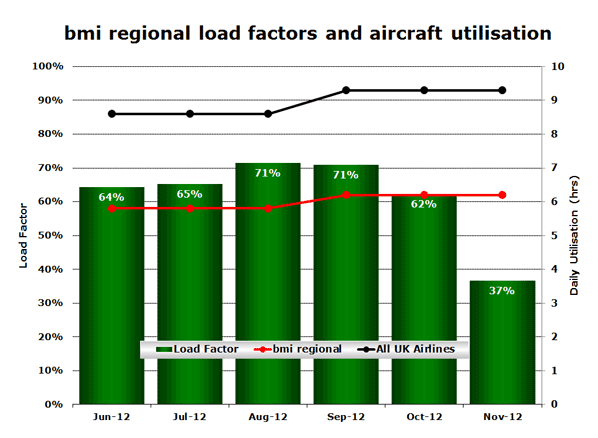 While the carrier’s report card will say “could do better” in terms of load factor, it is making some headway in terms of increasing its aircraft utilisation, although it still trails the UK airline average by around 33%. In 2011, the “old” bmi regional achieved just 5.1 daily hours on its ERJ-135 fleet, and 6.3 daily hours for its ERJ-145s. In November 2012, the “new” bmi regional has improved the ERJ-135 fleet utilisation by 8% up to 5.5 daily hours, while gains have been harder to come by for the ERJ-145s – up just under 2% to 6.4 daily hours – but they are at least moving in the right direction. Hopefully, this is just one of many positive indications for the airline as it adapts to life without its big brother.