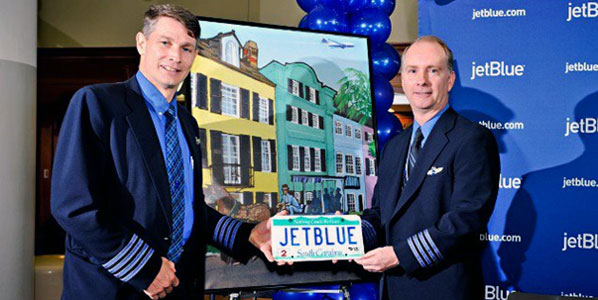 In spite of detrimental economic conditions and relatively low concentration of air services in South Carolina (see the anna.aero analysis of South Carolina traffic here), Charleston International Airport saw its traffic grow by 60% in the last decade. While the growth was far from linear, declines were noted only in three years – 2006 (-12.4%), 2009 (-6.3%) and 2010 (-7.7%). 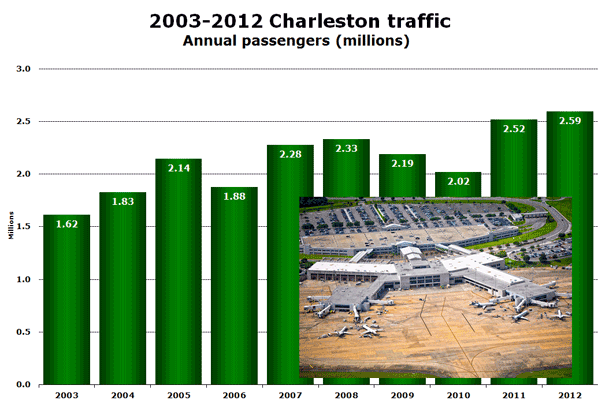 Notably, the positive 2011 result indicates that the airport’s fortunes have changed again with passenger figures up by almost a quarter that year. This rate of growth is difficult to sustain however, and in 2012, traffic expanded by 2.9% with a total of 2.59 million passengers handled at the airport.

Even though Charleston still has “international” in the name, the airport last saw such services in December 2002 when Air Canada pulled its daily service to Toronto Pearson. In April 2013, six airlines offer domestic services to Charleston. Delta Air Lines is the largest operator, offering flights to five destinations from the South Carolina airport and provides 35% of its weekly seat capacity. Delta is also the fastest growing carrier in April 2013, as it increases its offering by 22.4% over the same period in the year before. The other network carriers active at Charleston — US Airways, United Airlines and American Airlines — will have all increased their weekly seat capacity in April 2013, by 16.5%, 22.7% and 20.3% respectively. This growth comes entirely from adding frequencies on existing routes. 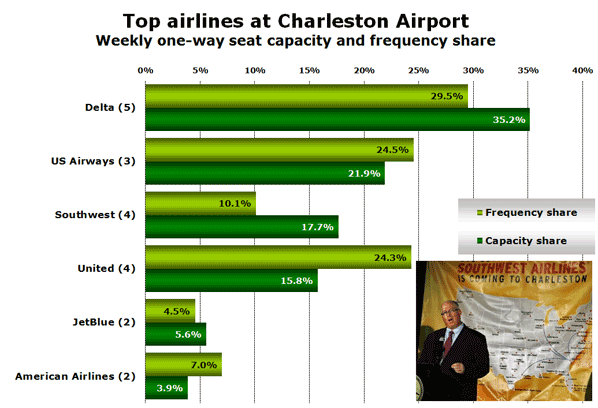 LCCs had long neglected the Charleston market, with Southwest reversing this trend as recently as March 2011, when it launched services to Baltimore Washington, MD (thrice-daily), Chicago Midway, IL (twice-daily), Houston Hobby, TX, and Nashville, TN (each daily). Southwest, which last year grew by 3.8%, now has 10% of the airport’s weekly frequency share and 17.7% of its seat capacity. The only other LCC serving Charleston at the moment is the newly arrived JetBlue, which immediately commands 4.5% and 5.6% respectively of frequencies and seats offered at Charleston in April 2013.

Following Delta’s withdrawal of its daily service to Washington National (on which it competed against US Airways’ 27 weekly flights) in the course of last year, there was virtually no direct competition on routes from Charleston until the arrival of JetBlue last week. While JetBlue now offers an alternative to Delta’s services to New York JFK (offered with twice-daily frequencies by each carrier) and to Boston (daily vs. Delta’s weekly), Delta also offers 33 weekly services to New York LaGuardia and United’s 35 to New York Newark. 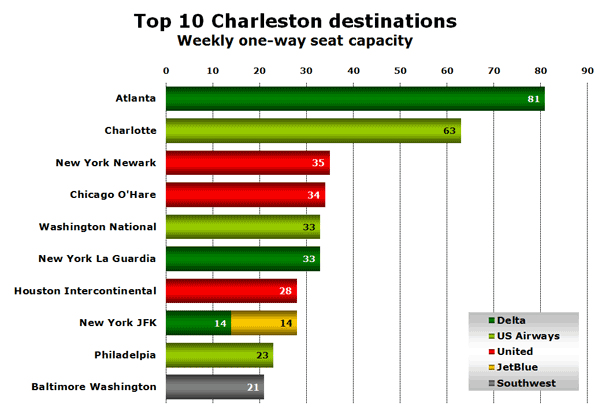 Almost 40,000 weekly seats will be offered by airlines from Charleston in April 2013, which constitutes 60% more than at South Carolina’s second-largest Greenville/Spartanburg Airport, located in the north of the state. Charleston is also the state’s fastest growing airport in terms of capacity: According to data provided by Innovata, in April 2013, weekly seat capacity at the airport will have grown by 24% over April 2012, compared to 9.1% in Myrtle Beach, 3.2% in Columbia, and only 0.4% for Greenville/Spartanburg.