Serving Indonesia’s busiest aviation hub, Jakarta Airport is one of the region’s most congested facilities: It was designed for 22 million passengers in early eighties, but handled 50+ million last year. Planned extensions will not materialise until late 2015 at the earliest.

Home to almost 240 million people according to the 2010 census, Indonesia is the largest economy in South East Asia. While around a tenth of the population still live below the poverty line, the country’s GDP per capita growth has accelerated to an average of 6% annually in recent years, owing largely to exploding internal demand. This means that – unlike during the Asian financial crisis a decade earlier – Indonesia was sheltered from the negative effects of the post-2008 global economic breakdown. 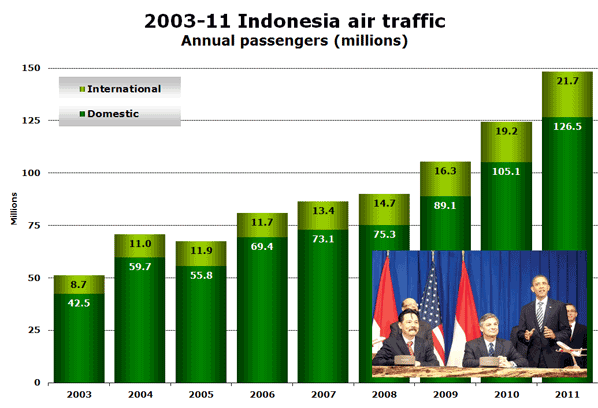 Data available from BPS Statistics Indonesia reflects the favourable economic environment in Indonesia. The country’s commercial aviation market grew almost threefold in the period between 2003 and 2011, with domestic traffic expanding at a slightly faster pace than international. In 2011, a total of 126.5 million passengers travelled internally in Indonesia (+198% on 2003 figures), while 21.7 million were carried to and from the country (+150% vs. 2003).

Surabaya is the fastest growing domestic airport in 2012

While full year’s 2012 data for all Indonesian airports was not available at the time of closing for print, analysis of the 2012 figures (passenger departures only) for the country’s five largest airports gives some first insights. Having handled close to 20 million domestic and 5.8 million international departing passengers in 2012, Jakarta Airport is Indonesia’s largest facility.

Denpasar, the country’s second-busiest airport enjoys a fairly even split of services between domestic and international owing to its location on the highly popular island of Bali, while Surabaya – Indonesia’s #3 – is largely driven by domestic traffic. 18.2% growth was noted here in 2012 for this segment, the best result amongst the top 5 airports.

Following the demise of Batavia Air earlier this year, Indonesia’s domestic market is served by 11 carriers. However, capacity is fairly concentrated and the three largest airlines account for around 65% of weekly frequencies and 70% of seats. Lion Air, which has grown aggressively in recent years (domestic capacity +34% in April 2013 vs. April 2012), but still has over 300 Boeing narrow-bodies on order, commands 45% of Indonesia’s weekly domestic seats. 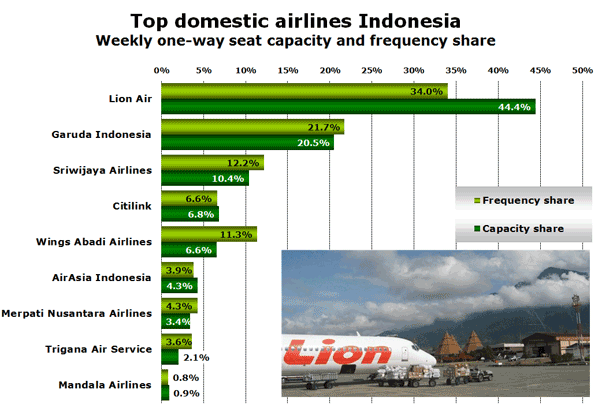 While Garuda Indonesia increases its seat its offering by a modest 15% this April, keep an eye on another domestic carrier, Sriwijaya Air, which since last April has more than doubled its market share in terms of capacity offered up to 10%.

Of the top 10 international destinations offered from Indonesia as many as seven are in fact regional routes. Singapore leads the ranks – while a total of 463 weekly flights are offered on the route by 16 airlines from just as many Indonesian airports, 54% of capacity is allocated to Jakarta. 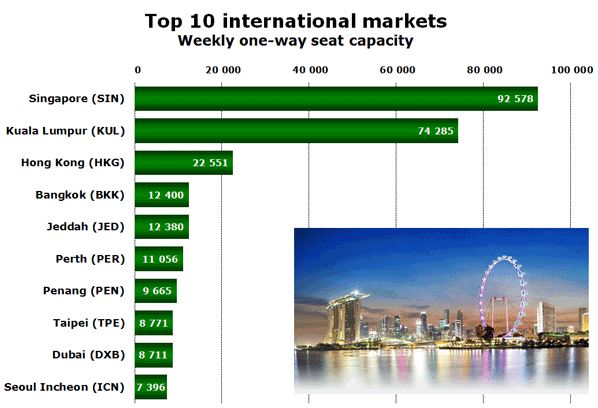 Jeddah, is the highest-ranking long-haul destination from Indonesia in terms of weekly seats. In April 2013, the Saudi city will be served exclusively from Jakarta with marginally less frequencies than in the respective period of 2012 (28 weekly flights vs 31 in April 2012).