This week sees the launch of easyJet services from Milan Malpensa to Luxembourg, the airline’s second route to the Grand Duchy, having launched London Gatwick flights last October. This is the first of three exciting new routes that the airport will celebrate in the coming months, as Vueling will begin four weekly flights to Barcelona in May, and Turkish Airlines will begin flights to Istanbul on 25 June. Neither of these two carriers have served the country before.

The opening of a new terminal in May 2008 has apparently helped stimulate the Luxembourg air travel market. Although traffic fell by 8.5% in 2009 following the economic downturn across much of Europe, passenger numbers since then have grown by a well above average 24% in just three years, with the airport handling a record 1.92 million passengers last year. With the launch of these new routes, the airport could easily pass two million passengers for the first time in 2013. 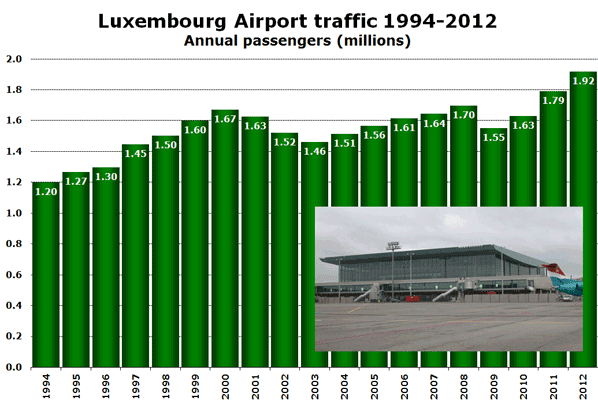 Luxembourg’s seasonality profile is typical of many European airports with passenger numbers in the summer peak (July and August) around twice as high as in January, the airport’s quietest month for passenger movements. 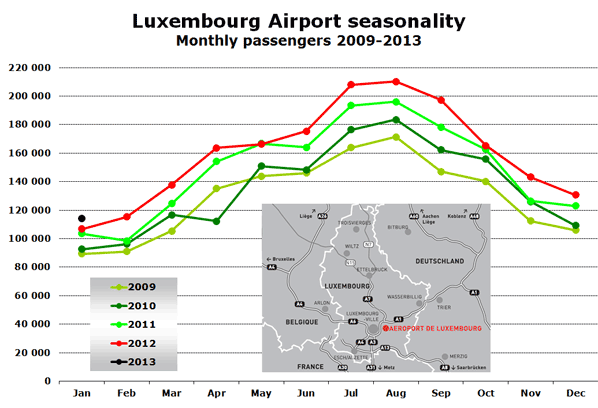 Luxair dominates with two-thirds of seats

The national airline of Luxembourg, Luxair, operates a fleet of 17 aircraft; two 737-800s (186 seats), three 737-700s (141 seats), six Q400s (76 seats), and six ERJ-145s (49 seats). Apart from serving many major European cities (including Frankfurt, Geneva, London, Madrid, Milan, Munich, Paris, and Vienna) with regular scheduled flights, the airline operates a fairly extensive programme on behalf of LuxairTours, increasing the number of destinations it serves in August to around 50, though almost 30 of these are served just once or twice per week. According to the airline’s latest presentation (February 2013) it also has codeshare agreements with Air France, Alitalia, Austrian, LOT, Lufthansa and Turkish Airlines. The most extensive collaboration is with Lufthansa (which owns 13% of the airline) and Luxair passengers can collect Miles & More bonus miles on all services.

The prize for second busiest carrier at the airport is a toss-up between KLM, British Airways and Swiss each of which operates multiple daily flights from their home hubs. Other carriers present include Air France (serving London City), Lufthansa, SAS, TAP Portugal and this summer’s newcomers Turkish Airlines and Vueling. 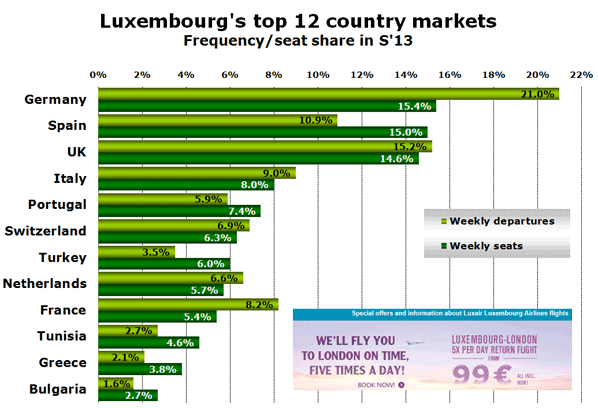 The Grand Duchy of Luxembourg is the EU’s smallest country (at just 2,500 square kilometres), and the most prosperous, with its GDP per person two and a half times the average of all EU countries. However, most people will struggle to think of something for which Luxembourg is famous for but here at anna.aero we have come up with the following: