With direct routes to both Auckland and Sydney, Santiago de Chile is South America’s best connected airport when it comes down to Australasia. Qantas appreciated the city’s favourable location last year by relocating here from Buenos Aires.

Comodoro Arturo Merino Benítez International Airport, perhaps better known as Santiago de Chile International Airport, serves the 5+ million inhabitants living in the Chilean capital. While the country’s geographical features and the concentration of economic activity in the Santiago area (which contributes around 50% of Chilean GDP) encourage domestic traffic, Santiago Airport is also the country’s main international gateway – in 2012, international passenger movements accounted for 48% of the airport’s total traffic. Double-digit annual traffic growth in the recent years and the expansionist policy of the airport’s based carrier, LAN Airlines, has created the need for terminal capacity development. In fact, a new international terminal is now in the pipeline and, once it’s commissioned in 2019, it will increase the airport’s capacity by 60%.

In 2012, a total of 14.2 million passengers were handled in Santiago compared to 11.9 million in 2011 according to data facilitated by the airport, which translates into an annual increase of 19%. While the split between domestic and international traffic is fairly even, the former is currently showing a more dynamic character, as it grew by 21% versus the 17% noted for the international segment. In fact, domestic traffic grew 80% in the last five years (2012 vs. 2008), compared to 28% for international. 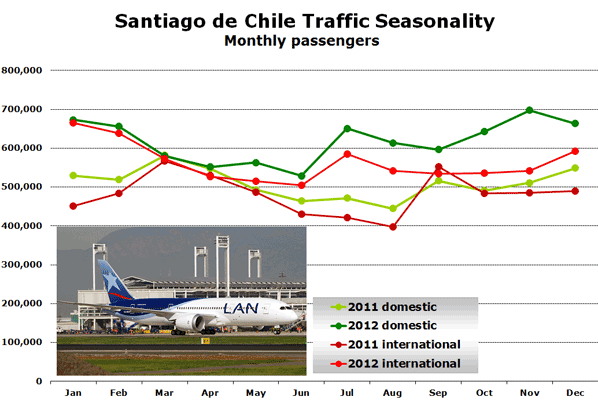 Seasonality at Santiago Airport is fairly limited, and in 2012, the weakest month (June) saw about a decrease of about a fifth in terms of passengers handled compared to the peak month of January.

Examination of Innovata weekly average data shows that in April 2013, international capacity will be up by 4.2%. LAN Airlines, Santiago’s based carrier, is the largest carrier in the market with 61% of frequencies and 59% of weekly seats. TAM, LAN’s partner airline, commands a further 8% of weekly seats at the airport, having increased its offering by 65% compared to the same period in 2012. In anticipation of a full merger later this year, TAM has increased frequencies from Sao Paulo Guarulhos to thrice-daily and launched daily services to Rio de Janeiro. 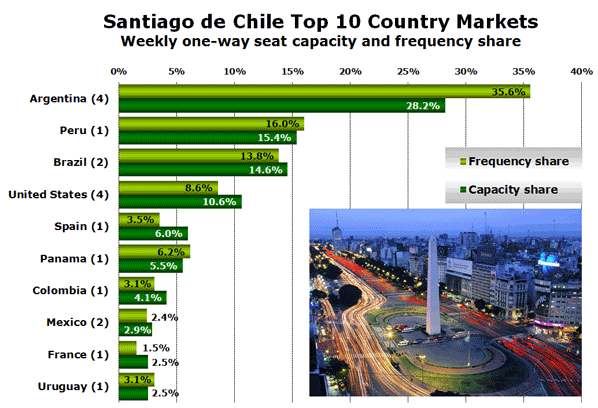 Argentina is the largest country market and accounts for over a third of weekly frequencies. Both Buenos Aires airports (Aeroparque and Ezeiza), Cordoba and Mendoza are served from Santiago with a combined total of 162 weekly flights. LAN provides 67% of frequencies to all four destinations, more than three times as much as its closest competitor, Aerolineas Argentinas, which operates two routes (Buenos Aires Aeroparque and Mendoza). Notably, the region’s other network carrier, Taca, withdrew its nine weekly service from Lima, while Copa Airlines increased frequencies to its Panama City hub by a third compared to the same period in the previous year.

Of the two European markets in the top 10 from Santiago, capacity to France remains stable (daily flights to Paris CDG by Air France), while a 13% increase was noted in the market to Spain, as LAN increased frequencies to Madrid from daily to nine-weekly. The market from Santiago to Mexico saw slight seat capacity decline (-14%), caused by AeroMéxico’s frequency cuts to Mexico City (thrice-weekly down from five weekly in April 2012), as did Uruguay. The latter saw 55% of April 2012 capacity wiped out on the spot, when Pluna folded last summer.

73% domestic capacity is LAN’s; Sky Airline grows by a third

Measuring almost 4,500 kilometres in length, Chile is well suited for the development of domestic flying. As the country’s leading carrier, LAN Airlines is also the largest player in the domestic market, offering 73% of weekly seats across its network of 13 destinations. While the airline withdrew the twice-daily service to Valdivia in the south of the country over the course of last year, its total capacity in April 2013 is 16% larger than a year before. Santiago’s second-largest domestic operator, Sky Airline, saw the most dramatic capacity growth in the last year, as it increased its weekly seat offering by 33%. Again, its growth came from capacity expansion in existing markets from Santiago with Calama and Puerto Montt noting two- and four-fold frequency growth in April 2013 compared to the previous year. Only one route was pulled by the airline from its Santiago network last year, as it discontinued thrice-weekly schedule to El Salvador, a declining mining centre in the Atacama Desert. 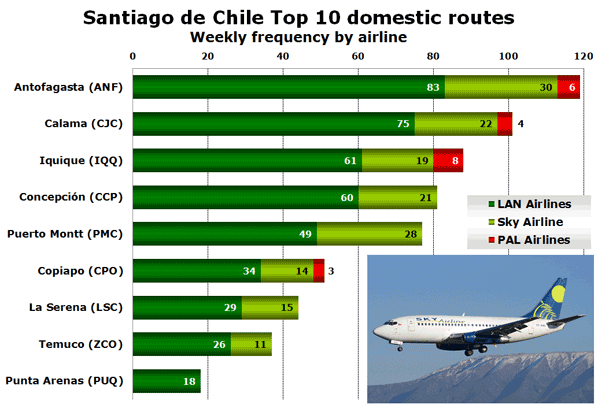 The northern Chilean port city and an important mining centre, Antofagasta, is the busiest domestic destination from Santiago, served with a total of 119 weekly flights. Two-thirds of the seat supply to this affluent region (annual GDP per capita is similar to that of the UK) are commanded by LAN. The airline competes against Sky Airline on nine of the top 10 domestic routes from Santiago, the only exception being Punta Arenas, to which it operates 18 weekly flights in monopoly conditions. PAL Airlines, the smallest domestic carrier from Santiago (4% seat capacity in April 2013), provides further competition on four of the top 10 routes. Antofagasta (6 weekly flights), Calama (4), Iquique (8) and Copiapo (3) are the only domestic routes offered by the airline from Santiago. New international terminal, including four remote concourses, will increase Santiago Airport’s capacity by at least 60%. Speaking last week in Santiago was Loreto Silva, the city’s Minister of Public Works: “What we are talking about is an airport that wants to become the largest and most modern in Latin America.”

Quite similarly to another South American airport, Bogotá, analysed by anna.aero last week, Santiago de Chile is outgrowing its existing facilities, originally designed for nine million passengers. Expansion plans include the construction of a new international terminal, as well as remodelling of the existing building and its conversion into domestic terminal. Construction is scheduled to begin in 2015, and its completion four years later, is expected to increase the airport’s capacity to 30 million annual passengers.