Airbus shortens the distance to Boeing; wide-body deliveries drag the performance down

no images were found 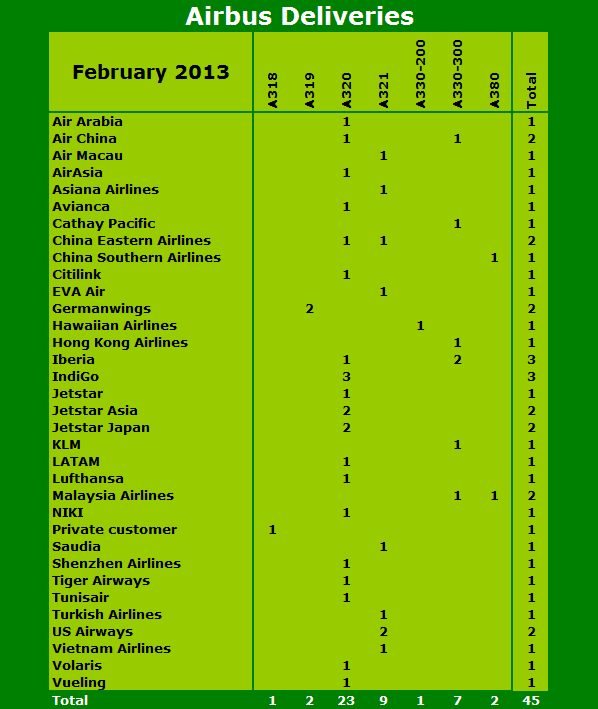 Airbus closed the month with a total of 45 delivered units, which constitutes ten units more than the amount delivered in January 2013, and two units less than in February last year.

Once again, deliveries in January were led by the A320 family, with a total of 35 single-aisle jets provided to airlines worldwide. The Jetstar group of airlines was the largest recipient of A320s, with Jetstar Asia and Jetstar Japan taking two units each, and Jetstar receiving one aircraft. The Indian carrier, IndiGo, took a total of three A320s, while Germanwings saw the arrival of two A319s. US Airways was the only other airline to receive more than one unit, as it took delivery of two A321s. 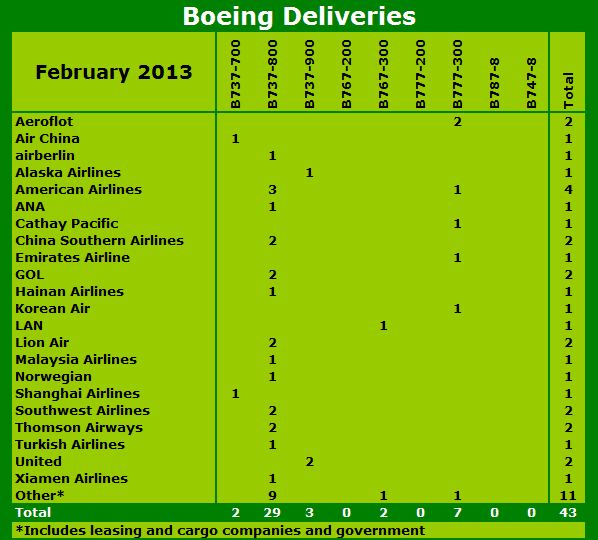 Boeing closed February with a total of 43 units delivered, four more than in January and three less than in the same month of 2012.

Airlines received a total of 34 narrow-bodies from the American air framer, two more than in the preceding month. American Airlines was the only airline to receive three 737-800s, while a number of carriers received two units of the type – China Southern Airlines, GOL, Lion Air, Southwest Airlines and Thomson Airways. Furthermore, United Airlines saw two 737-900s reinforce its fleet.

While two more wide-body units were delivered in February 2013 than in January, the US air framer weakened its year on year performance, delivering four units less than the 13 it managed in February 2012. For a second consecutive month, Boeing failed to deliver any 747-800s or 787s, and wide-body deliveries in February were driven by 777-300s. Aeroflot received two units of the type, while American Airlines, Cathay Pacific Airways, Emirates Airline and Korean Air each took one 777-300. LAN was the only commercial airline to receive a 767-300 in February.