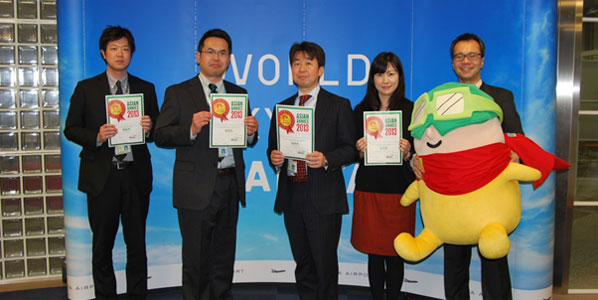 anna.aero’s annual Asian ANNIE prizes are based on science, statistics and evidence rather than people’s opinions (and votes). Using Innovata schedule data for nearly 1,100 airports and over 300 airlines operating in the Asia-Pacific region, our team of data elves have stared at spreadsheets until they began to see cells in front of their eyes, to unearth the winners. As a result, here at anna.aero, we think we have come up with a more transparent way of rewarding airlines and airports which have achieved notable route and traffic related success in the Asia-Pacific region over the past 12 months. 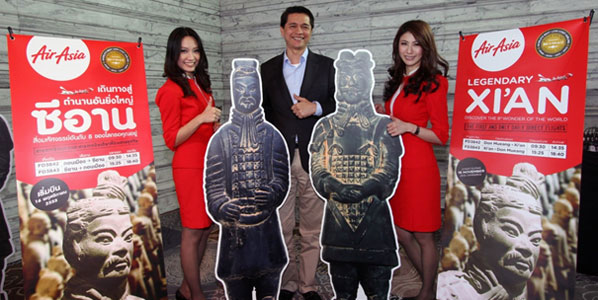 The Thai capital’s predominantly domestic traffic airport is the clear winner of this prize, having gained a net of 28 new routes when comparing this month’s Innovata schedule data with that of March last year. Bangkok Don Mueang International Airport’s growth is largely caused by services being moved back over to the airport from the main Suvarnabhumi airport, following the former’s temporary closure as result of the damage caused by the flooding that hit Thailand in November 2011. The return of AirAsia on 1 October 2012 was the main catalyst for the recent success, with the group’s airlines now flying on no less than 26 new destinations from Don Mueang (22 with Thai AirAsia; three from Indonesia AirAsia; one from AirAsia itself) in comparison to what was operated in March 2012. Nok Air has added two more domestic points in the same period — namely thrice weekly operations to Buri Ram Thai and double-daily services to Chumphon. No routes have been lost in the last 12 months!

Over the last year, Tokyo Narita International Airport has held onto all of its long-haul routes, meaning that its additional five routes are all net gains: Japan Airlines to Boston and San Diego (both designated as 787 routes), Qatar Airways to Doha (service became non-stop in October 2012, rather than operating via Osaka) and Egyptair to Cairo. Narita pipped Kazakhstan’s Almaty International Airport to the top-spot by virtue of a single operation during March 2013 by SAS to Harstad-Narvik in Norway.

Because of the definition of a ‘long-haul’ flight for this award category is a flight from the Asia-Pacific region (as defined by anna.aero) to outside the region, it does allow for some shorter flights to be counted (such as flights between the Indian subcontinent and the Middle East). Therefore Almaty’s four new routes to ‘European’ Russia were all counted as ‘long-haul’ – namely Invest Avia Airline’s operations to Grozny (once per week) and Mineralnye Vody (twice-weekly), as well as Yakutia Airlines’ single weekly service to Krasnodar, as well as home-based carrier Air Astana’s thrice-weekly route to Kazan.

Airport With The Most New Carriers
Winner: Yangon; Runner-up: Nanning

With a population of over four million, Yangon is the largest city in Myanmar – which has undoubtedly contributed to its airport sealing victory in this prestigious category of the Asian ANNIES. Looking at the list of new airlines it has secured in the last 12 months, there is a big showing of major carriers including: Eva Air (thrice-weekly, Taipei); Dragonair (Hong Kong, four times weekly); Korean Air (daily, Seoul); All Nippon Airways (Tokyo Narita, thrice-weekly); Asiana (twice-weekly, Seoul); Qatar Airways (Doha, daily) and Singapore Airlines (daily, Singapore).

Starting a total of 32 weekly rotations are the six new airlines that have been attracted to the airport of the Green City of Nanning, capital of the Guangxi Zhuang region of China. In comparison to category winner Yangon, there is a more eclectic feel to the mix of new airlines at Nanning Wuxu Airport — Jetstar Asia Airways (weekly, Singapore); Lucky Air (Kunming, daily; Xiamen, thrice-weekly); AirAsia (thrice-weekly, Kuala Lumpur); City Airways (Phuket, weekly); Chengdu Airlines (thrice-weekly, Chengdu) and Beijing Capital Airlines (Lanzhou and Sanya, each four times weekly).

As there is no comprehensive passenger growth data available throughout the Asia-Pacific region to accurately give a picture of the fastest-growing airports, our prizes are based on the fastest growth in scheduled seat capacity, as reported to Innovata. The airports are divided into four different categories based on the airport’s size (measured by annual passenger throughput).

In this way, China is represented four times in the fastest growing airport Asian ANNIE category, squeezing Indonesia into second place with three of its airports receiving their respective accolades. Not unsurprisingly, and again for the reason stated previously, Bangkok Don Mueang’s staggering annual growth of 312% takes up the last spot of the eight winning airports – to secure its second award of 2013.

Giving Airports of Thailand its third win of the Asian ANNIES 2013 is the ‘planespotter award’ (as it is affectionately known by anna.aero data elves), allocated to the airport that boasts the most different airlines — which goes to Bangkok Suvarnabhumi again!! (It won the same award in 2012!) With 86 airline customers this month, increasing by one net airline over the last year, the airport is still a fair bit ahead of Hong Kong International Airport (runner-up for the second time in 2013), which now welcomes 77 airlines to its facilities, an expansion of four airlines that sees it leap-frog last year’s runner-up, Beijing Capital Airport. January 2013: China Eastern connects Nanjing to Sydney with thrice weekly A330-300 flights, just one of 113 new routes the airline has launched in the past 12 months.

To win this award, China Eastern broke through the 1,000 routes mark, to sit alongside China Southern Airlines, the only other airline in the 1,000 routes club, although at 1,032, the Guangzhou-based carrier still operates more routes than its Chinese mega-carrier cousin. Now operating 1,001 routes, China Eastern blasted its way to winning this award by launching a mind-blowing 113 new routes in the last 12 months. Against such stiff competition, it was always going to be tough to take #1 spot in this category of the Asian ANNIES, but the runner-up, Indonesia’s Sriwijaya Air, still started an impressive 72 routes since March 2012 in one of the world’s most burgeoning air travel markets. 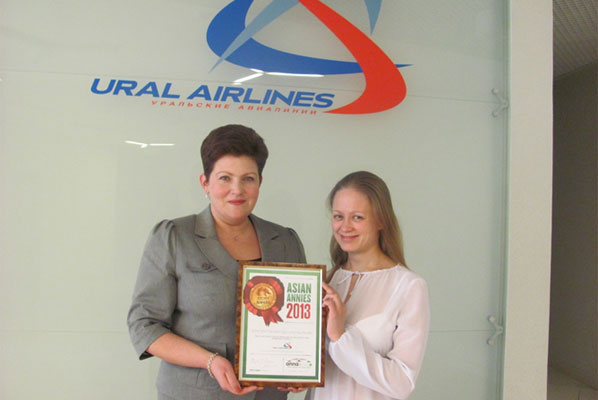 Going one better in 2013, Ural Airlines improved on its runner-up spot for Airline With The Most New Long-Haul Routes that it achieved in the Asian ANNIES 2012. Pleased to be receiving the top prize in 2013 are Marianna Galagura (left), Head of International Sales Department and Valeria Sorokina, Manager International Relations.

Having come second in the same award last year, Ekaterinburg-based Ural Airlines has gone one better in the Asian ANNIES 2013, scooping top spot this time out. The airline was just outside the top 40 airlines in terms of overall new routes, but of the 12 new routes begun in the past 12 months, two-thirds were new long-haul routes, with most of its growth centred on expanding its operations from Moscow Domodedovo Airport. Pakistani carrier Shaheen Air International, was just one route behind, launching seven new long-haul routes since March 2012.

Roles have been reversed in this award category, with Sriwijaya Air stealing the bragging rights from China Eastern for this particular ANNIE, as well as the Shijiazhuang-headquartered Hebei Airlines. However, the margin of victory, was far less than that meted out by the Chinese carrier, with the Indonesian carrier stealing the win by just one destination from the two runners-up. Notably, all of Sriwijaya Air’s 19 new destinations were in Indonesia, as the airline continues to focus all of its network development energy in the domestic market.

Following last year’s winner, VietJet Air, profiled last month by anna.aero, another LCC wins this particular Asian ANNIES 2013 award, with the latest carrier from the Jetstar stable of airlines — Jetstar Japan — beating off fellow low-cost newcomer AirAsia Philippines – the last but one incarnation (AirAsia India was the latest and was launched last month) to emerge from the LCC mega-brand, AirAsia. Jetstar Japan started operations in July 2012 from its hub at Tokyo Narita and, as of March 2013, it now flies to 14 destinations, all in the Japanese domestic market. The runner-up in this category, which is based at Clark International Airport, has a completely different route profile, offering nearly two thirds of its 84 weekly services in the international market, to Hong Kong, Malaysia, Singapore and Taiwan.