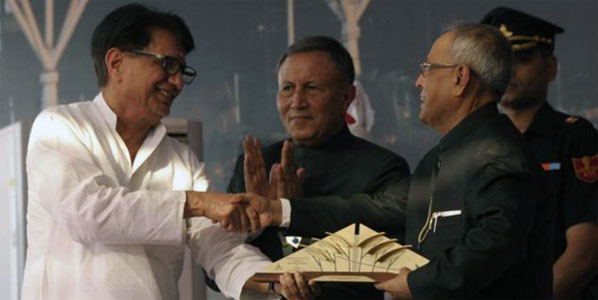 While official inauguration of the new terminal in Kolkata was performed by the President of India, Shri Pranab Mukherjee, in January, only this week are the airlines moving to the new facility, and this not without complications. As The Times of India reports, the terminal shift – which started on 10 March – will be temporarily halted on Wednesday 13 March to avoid a run-in with fate, and then will be resumed on the following day.

India’s fifth largest facility after Delhi, Mumbai, Chennai and Bangalore, Kolkata Airport serves the principal commercial and cultural centre of East India, inhabited by a population of more than 14 million. As with many other airports throughout the country, Kolkata faced considerable capacity constraints owing to rapid traffic growth in the recent years. These issues are now partly solved as the new passenger terminal opens this week.

According to annual data (year running April-March) published by Airports Authority of India, in the year ending March 2012, a total of 10.3 million passengers travelled to or from Kolkata Airport. Of these, around 15% used international services, while the remaining 8.7 million travelled domestically. 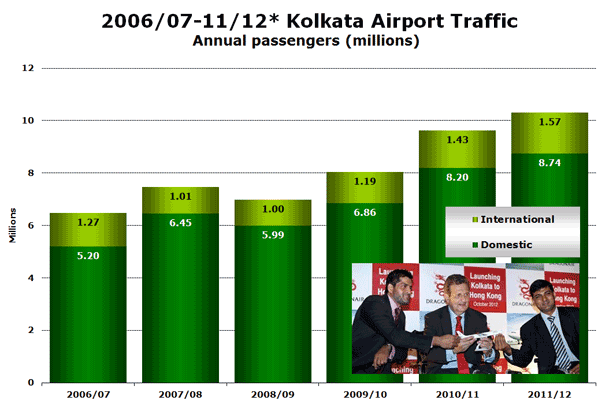 Analysis of capacity data for Kolkata in April 2013 shows that international frequencies are up by 44.7% in terms of weekly frequencies, compared to the same period of 2012. Jet Airways is by far the largest carrier operating in the international market from Kolkata, and has 17% of weekly departures and marginally less than 16% of seats. The airline, which served Dacca and Bangkok with daily flights from the capital of West Bengal, increased the frequencies on the Thai route to twice-daily in the course of last year. Emirates Airline provides marginally less seats and around half of Jet Airways’ frequencies on its lone service to Dubai, but nevertheless makes it #2. Air India expanded considerably in Kolkata over the last year (weekly international frequencies +160% in April 2013 vs. April 2012), as it became the fourth carrier to operate to Dacca (daily services also provided by Biman Bangladesh, Jet Airways and United Airways Bangladesh). 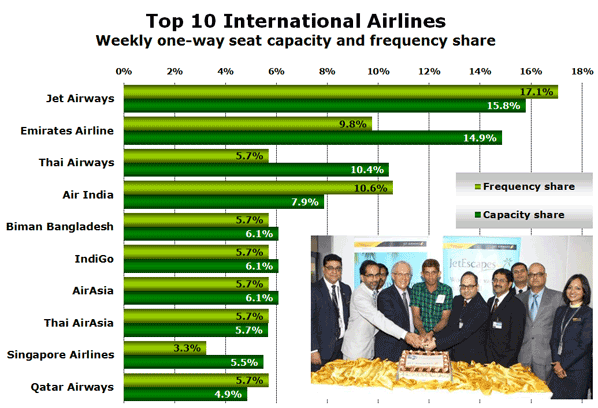 Bangkok is the largest international destination from Kolkata and, in addition to the twice-daily Jet Airways service, it is also offered on daily basis by both Thai Airways and IndiGo. Thai AirAsia introduced changes to its daily offering in the market from Bangkok to Kolkata in the course of last year, as it relocated to Bangkok Don Mueang last October.

Two genuinely new international destinations were added to Kolkata’s network since April 2012. In August, United Airways Bangladesh added its second route to Kolkata establishing the thrice-weekly link to Chittagong in south-eastern Bangladesh. Four-weekly services to Hong Kong were then inaugurated by Dragonair in November, as the airline’s second route to the Indian subcontinent.

Perhaps unsurprisingly, Delhi and Mumbai are the two largest domestic destinations from Kolkata and the only ones to be served with more than 100 weekly frequencies. However, while capacity to Mumbai grew by 6.7% in the year ending April 2013 (thanks to IndiGo adding a fourth weekly flight to the capital), the market to Delhi saw reductions of 24% in terms of weekly frequencies. Of the six carriers operating flights from Kolkata to Delhi, virtually all have reduced capacity since last year (IndiGo added one weekly service bringing its offering up to a total of 42), including the withdrawal of Jet Airways from the market (previously it operated 11 weekly flights). 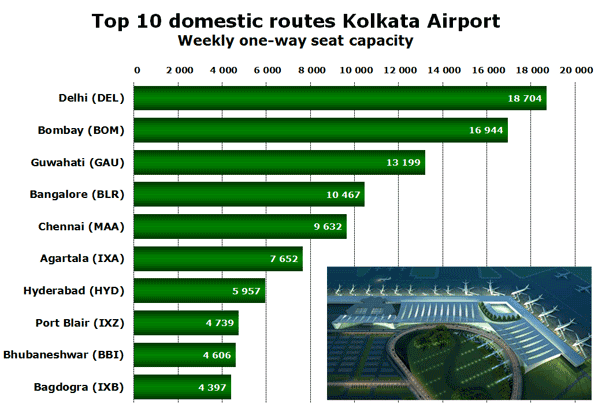 At 38% of weekly seats offered in Kolkata, IndiGo is the largest domestic operator at the airport providing services to 15 destinations across the country. It also is one of only two carriers to increase their offering in April 2013 (+3.3% weekly seats vs. April 2012). The only other airline to do so is GoAir, which in the course of last year added daily flights each to Ahmedabad and Bagdogra (it also serves Delhi and Port Blair with the same frequency).