Malaysia Airlines joined the oneworld alliance on 1 February this year. Celebrating the unveiling of the first oneworld logo on one of the airline's aircraft were oneworld CEO Bruce Ashby (left), Malaysia Airlines' Group Chief Executive Ahmad Jauhari Yahya (centre), and Qantas Group CEO Alan Joyce (right). Along with its new A380s and a return to profitability, Malaysia Airlines is facing the challenge of operating in a highly competitive Malaysian market with renewed vigour.

With AirAsia consistently one of the world’s most profitable LCC airlines, it stands to reason that the national flag-carrier it challenged at its home base at Kuala Lumpur International Airport (KLIA) is likely to have faced some challenges since 2002 when Tony Fernandes’ creation first took to the skies. The fact that Malaysia Airlines has taken until this year to join one of the three big alliances (it joined oneworld on 1 February), whereas regional rivals such as Cathay Pacific, Singapore Airlines and Thai Airways have long been members of an alliance, is indicative of the problems the airline has been grappling with in recent years.

In December 2011 the airline issued a “Business Plan – Our Way Forward” document the opening line of which pulls no punches by stating: “Malaysia Airlines is in crisis”, followed in the next paragraph by, “The core passenger airline business is chronically challenged.” In the Executive Summary the airline reports that:

One of the five cornerstones of the proposed recovery plan was:

The good news is that in each of the last two quarters of 2012, Malaysia Airlines reported a small operating profit, as during the course of the year some 20 new aircraft started to refresh the fleet. These included the first four of the airline’s six ordered A380s, which are currently dedicated to the airline’s key London and Paris routes. Total network capacity was cut in 2012 by 6%, but passenger revenue only fell 2% thanks to a 4% increase in RASK (Revenuer per Available Seat Kilometre). 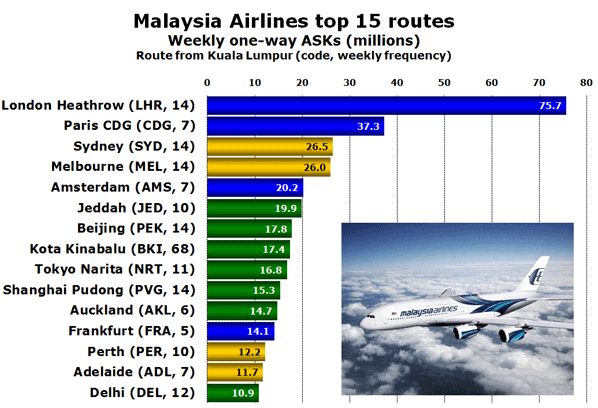 In terms of capacity as measured by ASKs (Available Seat Kilometres), the double-daily London service operated by the A380s, is by far the airline’s biggest route. Services to Europe (four, in blue) and Australia (four, in yellow) still account for over half of the airline’s top 15 routes by ASKs, despite an acknowledgement in the 2011 Business Plan that “Our network remains focused on the flows of a previous era, with a significant portion of our capacity concentrated on serving the highly-competed ‘kangaroo route’ connecting Australia to Europe.” The recent agreement between Qantas and Emirates Airline will not make this market any easier for Malaysia Airlines to compete in.

Cuts in international services from KLIA and Kota Kinabalu

The decision to cut the most unprofitable routes, resulted in early 2012, in the suspension of long-haul routes from KLIA to Buenos Aires, Cape Town, Dubai, Johannesburg and Rome, as well as the withdrawal of flights from Kota Kinabalu to Seoul and Tokyo.

The airline’s current schedule sees it operating non-stop to 59 destinations from Kuala Lumpur, with only 13 of these routes not served by another carrier, although the AirAsia group of airlines have in the recent past (but not currently) served Delhi, Hyderabad, London, Mumbai and Paris.

Competition is set to intensify in the coming weeks with the launch of Malindo Air which will start operating on the country’s two busiest domestic routes to Kota Kinabalu and Kuching. Furthermore, Air France and Turkish Airlines are introducing non-stop flights from Paris and Istanbul this summer, adding further pressure on Malaysia Airlines.

Australia #1 market for ASKs from KL

Thanks to non-stop flights from KLIA to Adelaide, Brisbane, Melbourne, Perth and Sydney, Australia is the leading country market for weekly ASKs from Malaysia Airlines’ home base, beating the UK into second place. Whether joining the oneworld alliance will help stimulate traffic between the UK and Australia remains to be seen, but it is notable that British Airways does not offer non-stop flights from London to Kuala Lumpur. 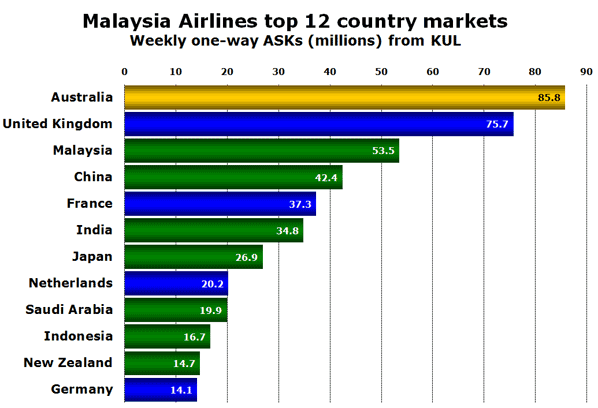