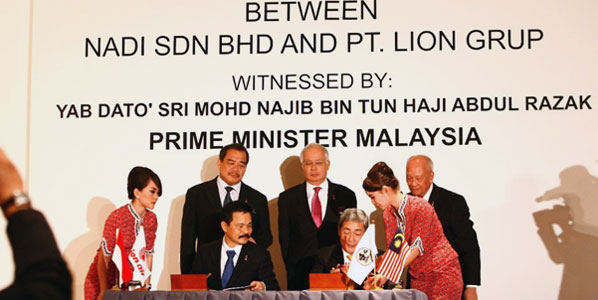 As AirAsia develops ever more joint ventures outside of its original home market of Malaysia, Indonesia’s Lion Air is finalising plans for creating a joint venture in Malaysia to be known as Malindo Air, taking its name from the first few letters of Malaysia and Indonesia, and not because it’s an anagram of “Mad Lion”. The local JV partner is Malaysia’s National Aerospace & Defence Industries (NADI). Latest indications are that the airline will start operating from Kuala Lumpur International Airport’s (KLIA) main terminal building from 22 March with three daily flights to Kota Kinabalu, followed on 23 March by four daily flights to Kuching. Both of these routes are already well served by Malaysia’s two biggest airlines.

Starting with a fleet of two aircraft, Malindo Air expects to have 12 737-900ER aircraft in operation within a year, with further domestic routes to Bintulu, Miri, Sandakan and Sibu already listed as “Coming soon …” on the airline’s website. However, with a fleet of 737-900ERs, international destinations are also envisaged, with China and India high on the airline’s priority list.

Less an LCC and more a value airline

Operating from KLIA’s main terminal and having a business class product on its aircraft suggests that Malindo Air is trying to position itself somewhere between AirAsia and Malaysia Airlines.

Each seat will have the option of individual in-flight entertainment (for a fee) and there will apparently be some free meal service. The airline’s slogan of “Not Just Low Cost” further highlights the airline’s attempt to position itself as a value airline rather than a pure LCC.