Shenzhen’s attractions may not be widely known outside of Asia but its airport handled more passengers in 2012 (almost 30 million) than either Boston Logan or Moscow Domodedovo. 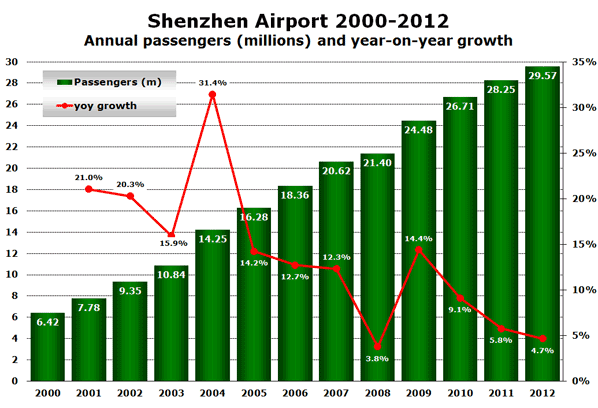 Passenger numbers have grown spectacularly from less than seven million in 2000 to almost 30 million in 2012, making it slightly busier than Boston Logan Airport (29.3 million) and Moscow Domodedovo Airport (28.2 million).

The airport’s busiest airline based on current seat capacity is Star Alliance member Shenzhen Airlines (which is a subsidiary of Air China), accounting for around 30% of all flights and seats. China Southern Airlines, which dominates at nearby Guangzhou, has around one-quarter of all capacity, while China Eastern Airlines, Air China and Hainan Airlines each have a further 10%.

The airport’s route network is dominated by domestic destinations. Eleven of the airport’s top 12 routes are served by at least four different airlines, with only Zhengzhou served by as few as three airlines. On none of the top 12 routes does any single carrier have more than 45% of weekly frequencies, ensuring that passengers have a healthy choice of airlines to choose from. 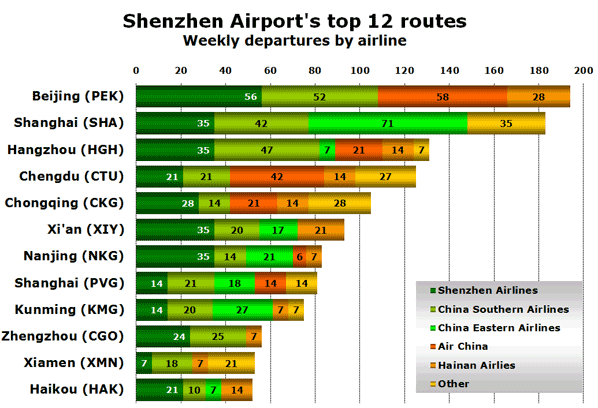 Comparing OAG schedule data for March 2012 and March 2013 indicated that 17 new services have been launched during the last year, of which 14 were domestic. Thai AirAsia transferred flights from Bangkok’s main airport (BKK) to its secondary airport (DMK), China Southern began twice-weekly flights to Da Nang in Vietnam, while Shenzhen Airlines resumed daily flights to Singapore.

No long-haul flights yet at Shenzhen

So far there are no signs of any long-haul services to the airport, which is almost unheard of for an airport that handles close to 30 million passenger per annum. 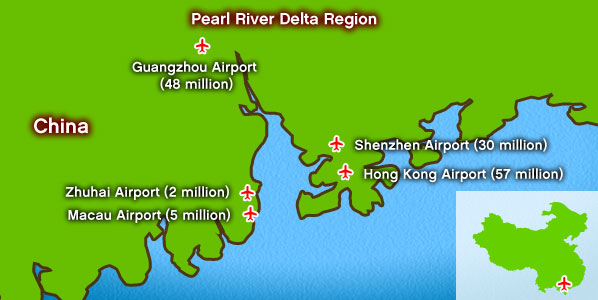 Shenzhen Airport is one of five major airports serving the Pearl River Delta in southern China. Last year the five airports handled in excess of 140 million passengers. However, unlike at nearby Hong Kong and Guangzhou there are no long-haul flights yet from Shenzhen.