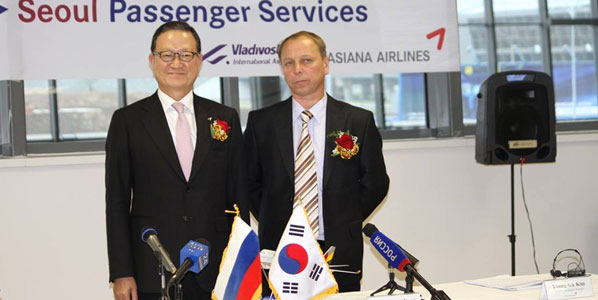 November 2012: Asiana Airlines’ President, Yoon Young Doo; and Igor Lukishin, COO of Vladivostok International Airport, celebrate the launch of the airline’s only daily and third overall service to Russia. In April 2013, capacity from South Korea to Russia will have grown by more than 40%, with all but one flight originating in Seoul Incheon and all destined for Far Eastern Russian airports. 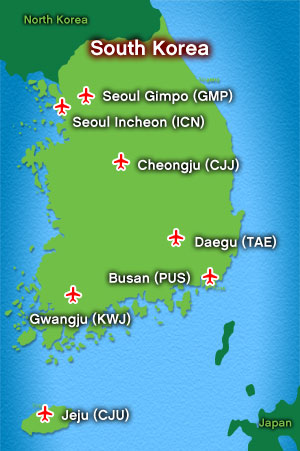 The world’s 15th largest economy in terms of GDP and 12th by purchasing power parity, South Korea is home to 50 million people who like to describe their home country’s economic success as “Miracle on the Han River”. But there’s no miracle here: rapid export-fuelled growth first transformed the country into one of the world’s most industrialized, and more recently, helped it weather the global crisis untouched. In fact, South Korea was one of the few developed countries to avoid recession altogether, and is now named as one of the emerging markets in the MIST group of countries, along with Mexico, Indonesia and Turkey.

Strong economic performance and the country’s high exposure to international trade have long been the driving forces in the development of South Korean commercial aviation. Average annual growth of 4% over the last decade included strong post-credit crunch traffic development (+15.6% in 2010, +5.2% in 2011, and +7.5% in 2012) and led to the all-time best annual result of 91.8 million passengers last year. 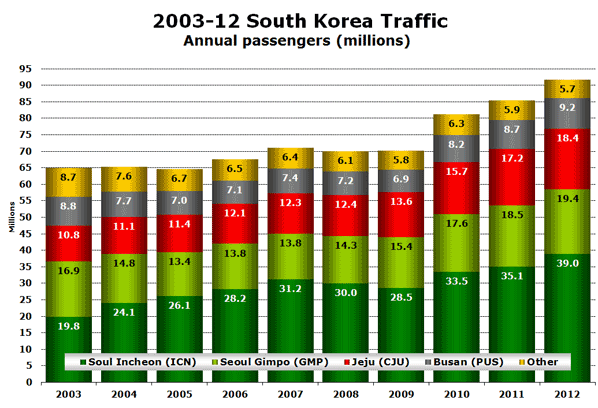 South Korea’s largest airport (40% of 2012 traffic), Seoul Incheon, handled 39 million passengers in 2012, achieving an annual rate of growth of 11%, which made it the fastest-growing of the country’s main airports. Notably, Seoul Incheon handles prevailingly international traffic, while the capital’s second facility, Gimpo, commands most of domestic movements in Seoul.

South Korea is widely known for its highly advanced rail transportation system, including two high-speed lines operated within the KTX project, which has had a negative influence on the country’s domestic air market. A total of 43.8 million people travelled on domestic services in South Korea in 2012, which constitutes a meagre 1.1% increase compared to a decade ago: in 2003, 43.3 million flew domestically. According to data available from Korea Airports Corporation and Incheon Airport, in 2012, South Korea’s domestic market grew by a modest 3%. 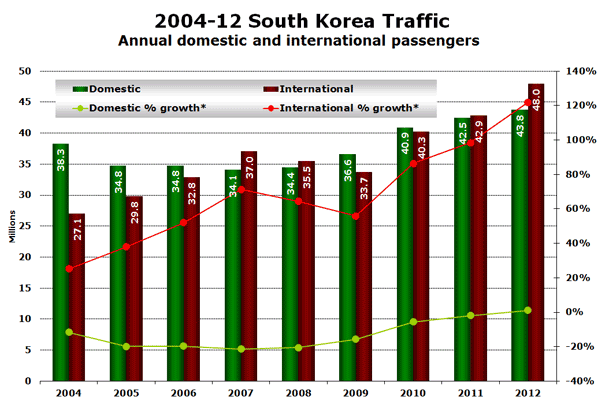 Contrasting with the domestic market is the international segment, which has more than doubled in size over the last decade, falling short of 48 million by just 40,000 passengers in 2012. Unlike domestic traffic, which suffered more from the SARS epidemic, the international market to some extent felt the impact of global downturn with passenger figures falling by up to 5.2% annually in 2008 and 2009. However, the trend was soon reversed, and 2010 saw a staggering growth of 19.5%. While results of similar order might seem difficult to sustain long-term, international traffic to and from South Korea was up almost 12% again in 2012.

China, Japan and the US are biggest international markets

Analysis of OAG Schedules iNet capacity data for April 2013 shows that more than a half of international frequencies are allocated to the two biggest international markets from South Korea – China (29.4%) and Japan (24.4%). Compared to the same period last year, the Chinese market is the more dynamic one of the two, with seat capacity up 8.9% (vs. 2.2% for Japanese routes). 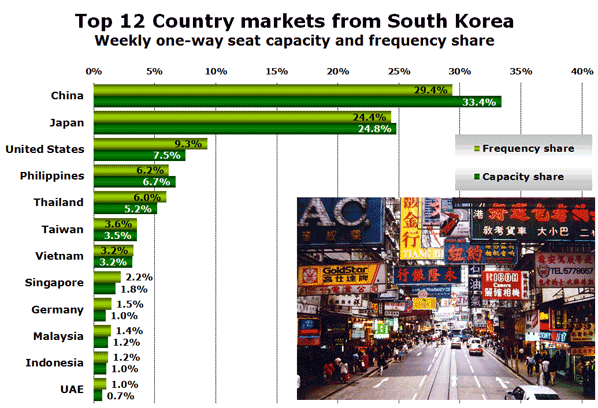 At a third of the size of the market to China in terms of seats offered in April 2013, the United Sates constitutes the third-largest country market from South Korea. Korean Airlines and Asiana Airlines serve 13 and nine US routes respectively, compared to one each by Delta Air Lines and United Airlines. Germany, which accounts for around 1% of international capacity from South Korea, is the only European country to make it into the top 12 list, while the market from South Korea to the UK, which recently was subject of a separate anna.aero analysis, is only the 16th busiest in terms of weekly seats.