Farewatch: High yields on London-Moscow hard to find for easyJet so far 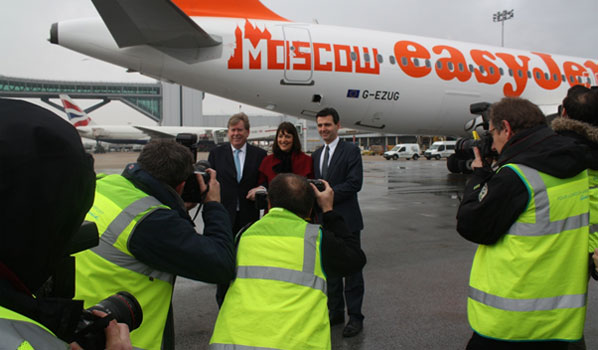 Launched amidst a media scrum this morning from a damp London Gatwick by easyJet boss Carolyn McCall, its new Moscow Domodedovo service is expected to be a prize new route delivering high yields. However looking at the first week of operations, the high fares are yet to materialise, but the airline has its excuses ready and it's early days. 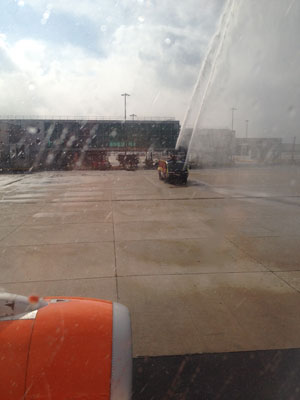 When easyJet announced its intentions to fly from London Gatwick Airport to Moscow Domodedovo Airport on 25 October last year, anna.aero did wonder whether the airline’s CEO Carolyn McCall could see the pound and ruble signs flashing in front of her eyes. ’Hmmm sector length shorter than London to Egypt, Turkey or the Canaries…and a market full of oil- and gas-rich oligarchs and businessmen with lots of Prada bags…kerching!’, mused McCall (perhaps) around her boardroom table at London Luton late last summer, after hearing that the LCC had been given the nod to replace bmi by the UK CAA over “Old Beardy” down at London Gatwick. But are her yield dreams coming true? anna.aero analyses the initial fares easyJet is attracting for its first week of its flights to Russia.

First the excuses. Excuse #1: Despite launching with much fanfare over five months ago, the route has only been on sale since 16 January, giving the airline just eight weeks to fill its flights. Excuse #2: Four weeks ago, there was significant negative press coverage in the UK and Russia suggesting that the airline was yet to secure full permission to fly the route — this will have dented passenger confidence and slowed bookings. Excuse #3: The start of double daily operations does not begin until 15 April, giving the higher yielding passenger that bit more flexibility and choice in terms of flight times. Not that many people would undertake a day-return from London to Moscow – although with over seven hours between the arrival of the first flight in Moscow and the departure from Domodedovo of the second daily flight, there is actually time to get downtown for a meeting and back to the airport (Moscow traffic permitting).

Looking at easyJet’s Top 20 routes in terms of sector length, its fledgling Domodedovo route is the nineteenth longest of the 86 routes which are scheduled to operate from Gatwick this April. Of these Top 20 routes on sale during this week, the Gatwick-Domodedovo route is attracting the lowest yield on five out seven days — with its best performance, fourth out of eight routes on sale, being on launch day, when the lowest one-way available (booking on 14 March) was £311 (and a chance to sit next to the airline’s CEO). From Moscow to London, easyJet’s one-way yield is marginally better for the first seven days, with the average of lowest fares still available being £136, versus £125 for UK-originating passengers. 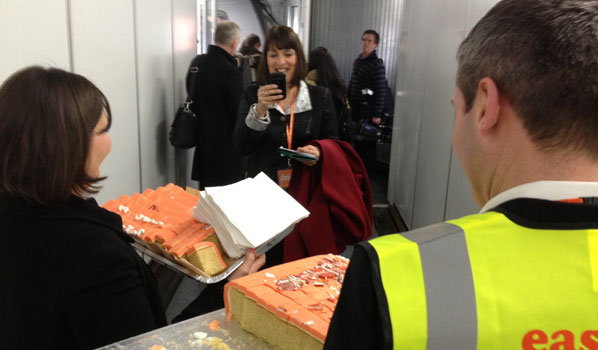 easyJet CEO Carolyn McCall is clearly impressed by the anna.aero-crafted launch cake - she will no doubt task her executives to use this masterpiece of culinary creativity as the benchmark for all future route launches!

The impact of the Gatwick-Domodedovo route’s present low yields are felt in the RPK figure being achieved, where it charts eighth out of the 12 services being flown by the LCC this week. Its relatively short sector length, in comparison to many of the other Top 20 longest routes, has resulted in this improved performance. However, the Russian route is currently commanding RPKs around the same level as the more leisure-orientated traffic found flying to Tenerife South in the Canary Islands and Funchal on Madeira. But with 16 competing weekly frequencies to Tenerife from Thomson, Thomas Cook and Monarch (easyJet operates 13 weekly), and four competing frequencies to Funchal, from Thomson and Monarch (easyJet operates six), clearly the Domodedovo route, where the LCC faces no direct competition from Gatwick, has some way to go on its revenue performance.

However, the revenue goldmine that is envisaged by easyJet is definitely present when undertaking a similar analysis for the other three airlines in the London-Moscow market. The leader in terms of extracting yield is British Airways, which operates thrice daily between London Heathrow and Moscow Domodedovo – its average lowest one-way fare (also including all taxes and charges) for this week is £773. Next is Aeroflot, flying up to thrice daily between Heathrow and Moscow Sheremetyevo, which is asking for an average of £620, while Transaero Airlines, operating double daily also from Heathrow, but to Moscow Vnukovo, is charging an average of £405. So Ms McCall’s yield dreams may yet come true.