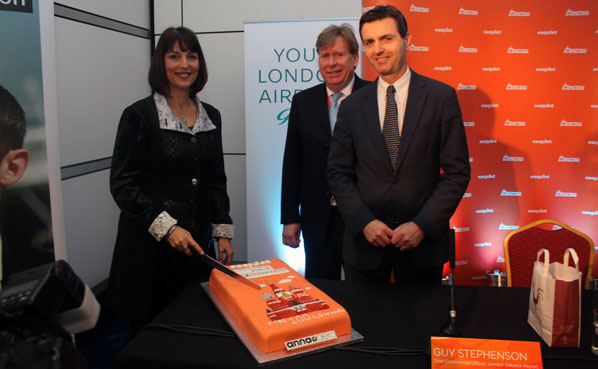 On the day that easyJet joins the FTSE 100 on the London Stock Exchange, CEO Carolyn McCall was at London Gatwick to cut the anna.aero cake to celebrate the launch of the airline's first route to Russia. Eagerly awaiting a chance to try the amazing Moscow-themed cake are Simon Burns, Minister of State for Transport (centre), and Guy Stephenson, Chief Commercial Officer, London Gatwick Airport (right). See our facebook page for more pictures. 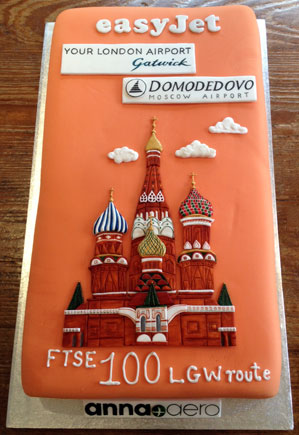 Saint Basil's Cathedral has never looked so tasty! anna.aero's baking elves combined the Moscow route launch and the airline's membership of the FTSE 100 into one celebratory cake.

This morning’s historic launch of easyJet’s London Gatwick- Moscow Domodedovo services comes on the same day as the airline enters the FTSE 100 – a fact also celebrated on the anna.aero route launch cake which we specially baked for the occasion.

The decision to enter a highly regulated market

easyJet normally flies to wherever it wants in deregulated European markets, whereas services to Russia are highly regulated according to very old-fashioned bilateral agreements which only allowed services by designated carriers.

easyJet’s chance to serve the supposedly lucrative Moscow market is the direct consequence of last year’s decision by Lufthansa to sell bmi British Midland to IAG, the owners of British Airways. The current air service agreement allows for a maximum of two airlines to be designated by both the UK and Russia and, as BA is already one of these, it had to give up bmi’s designation on London and Manchester services. So the UK CAA held a hearing last year at which both Virgin Atlantic and easyJet submitted cases for why they should be granted the traffic rights – and easyJet won. 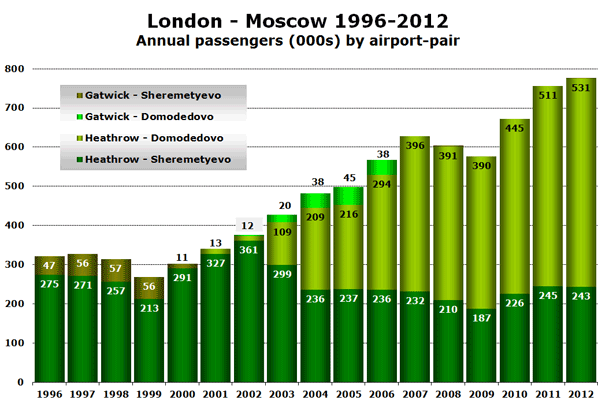 Since 1999, the London – Moscow market has seen passenger numbers grow from under 300,000 per annum, to almost 800,000 in 2012. Indeed, given the general sluggishness of travel demand to and from the UK in recent years, the Russian market ranks as a notable success. 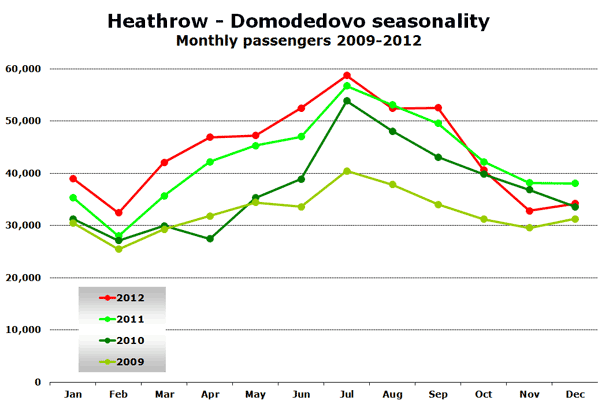 The route’s seasonality profile is fairly typical with a peak in July and a big dip in February. The downward trend at the end of 2012 for traffic between Heathrow and Domodedovo reflects the fact that Transaero Airlines moved one of its two daily flights to Vnukovo airport. The second daily flight will also move to Vnukovo at the start of the summer 2013 season. This change in airlines and airports served in the London-Moscow market is summarised in the following table.

As a result all four carriers in the market now fly without direct competition on the mixed airport-pairs that they operate. easyJet’s arrival also adds colour to the very mixed service levels and aircraft types by offering 180-seat A320s on the route –  British Airways uses a mix of 747s and 767s; Aeroflot flies A320s, A321s and A330s; and Transaero utilises a mix of 737-700s and 737-800s. Although starting initially with just a single daily flight easyJet will increase frequencies from London to twice-daily from 15 April.