Begun last November, a low-cost revolution is taking hold in Tanzania, marshalled by based new entrant FastJet, which from this week offers four domestic services on the country’s trunk routes. The airline will also begin an international offensive, with advances into Uganda and Kenya planned next, resulting in further growth in this burgeoning East African market.

Around the same size in terms of area as Egypt and Nigeria, and with a population similar to the Ukraine but larger than Argentina, Tanzania on the east coast of Africa has recently been under the global aviation spotlight thanks to the arrival of Sir Stelios Haji-Ioannou and his pan-African low-cost airline FastJet in November last year. This week, the carrier launched its second tranche of domestic routes in the country, linking Kilimanjaro to both Mwanza and Zanzibar. With the LCC carrying close to 100,000 in its first three months of operation and delivering an 81% load factor in February, Tanzania’s airports are hoping to break 4 million passengers for the first time in 2013.

With a population close to three million, the port city of Dar es Salaam is the country’s largest, and is indeed its commercial heartbeat. As a result, it dominates in terms of commercial aviation, commanding over 40% of the country’s weekly flights. Over 90% of Tanzania’s passenger activity is concentrated on its largest five airports, namely Dar es Salaam; island territory Zanzibar; Kilimanjaro, serving the region around Africa’s tallest mountain; the country’s second largest city on the shores of Lake Victoria, Mwanza; and Arusha, which is close to the Serengeti National Park. 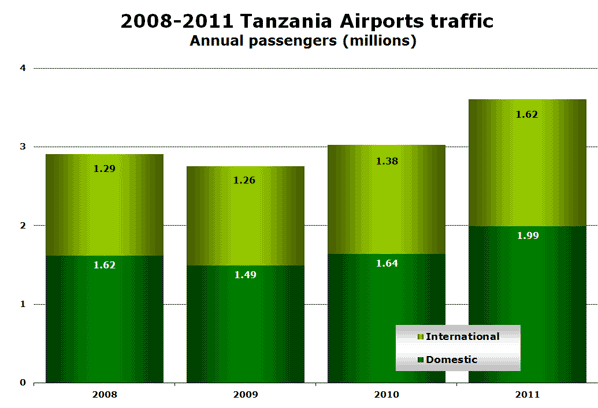 Traffic volumes grew by 10% between 2010 and 2009, outstripping the increase in annual seat volumes, taken from Innovata, which only rose by 6%. The airlines serving the country reacted positively in the following 12 months, with a 40% hike in seats in 2011, which produced a near 20% increase in passenger numbers as a result. While the Tanzanian CAA is yet to publish its passenger figures for 2012, the prospects look positive for continued growth, as the seats available increased again year-on-year, this time by a further 4% – representing nearly 60% more than was on offer in 2009.

The domestic market in Tanzania has the lion’s share of country market flights and seats, however with over 80% of all domestic services operated by 70-, 50- and 19-seat turboprops, its share of seats is significantly smaller than its share of flights. Kenya is the only foreign country with services from more than one airport, with both Nairobi Jomo Kenyatta International and Nairobi Wilson Airports represented, along with Mombasa Moi International Airport.

Up until now, FastJet has also concentrated its flying domestically, however it has also made public its intentions to launch regional services to Entebbe in Uganda and Mombasa and Nairobi in Kenya, which will increase both country’s relative share of the country market data during 2013.

As with many low-cost entries into a new market, like that of FastJet, there is normally a national carrier who is going to suffer the most at the hands of the newcomer – in Tanzania it’s the de facto national airline Precision Air, which has control of nearly 50% of local market in terms of seats and flights. Indeed, all four of FastJet’s start-up routes are also operated by Precision Air. The network of the domestic turboprop operator ZanAir, will probably be lucky enough to escape the attentions of FastJet, as it primarily links secondary airports across the country, with its highest frequency route (50 weekly departures) being the 70km hop across Dar es Salaam Bay between Zanzibar and the country’s commercial centre. 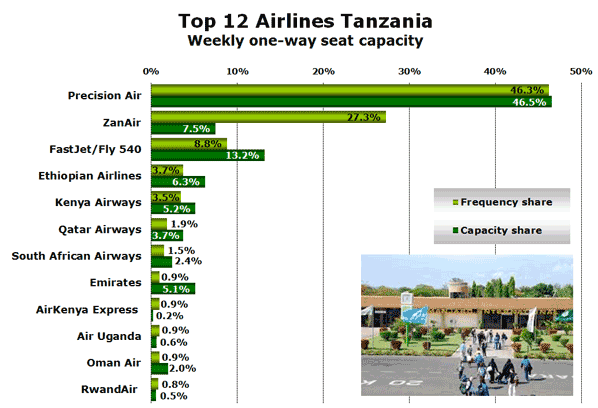 As Precision Air currently does not have any long-haul kit, numerous other carriers are sucking passengers out of Tanzania to feed their own respective networks. These include three Middle Eastern carriers Qatar Airways, Emirates Airline and Oman Air, with the latter offering daily connections from Muscat to Zanzibar, while the remaining two airlines are flying to Dar es Salaam (Qatar, double daily; Emirates, daily). Within Africa, Kenya Airways and Ethiopian Airlines are feeding their respective hubs, while KLM and Turkish Airlines provide the only hub connections to Europe, but as both only operate five weekly frequencies, neither is large enough to feature in the Top 12. 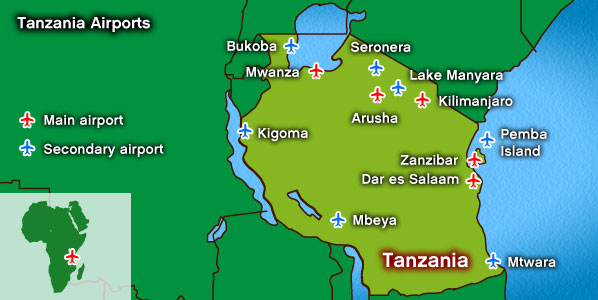