Last June, Scoot became the first long-haul airline to set up shop at Gold Coast Airport, when it launched five weekly services to Singapore. While no other airline flies on this route, AirAsia X serves the Australian airport from its Kuala Lumpur base, and Jetstar offers links to two locations in Japan – Tokyo Narita and Osaka Kansai.

Australia’s sixth-largest city, Gold Coast, located 94km south of the Queensland capital Brisbane, is famous for its beaches, sub-tropical rainforest, theme parks, nightlife and shopping, and is directly accessible from nine domestic and six international cities via Gold Coast Airport, which is also the sixth-largest in the country. 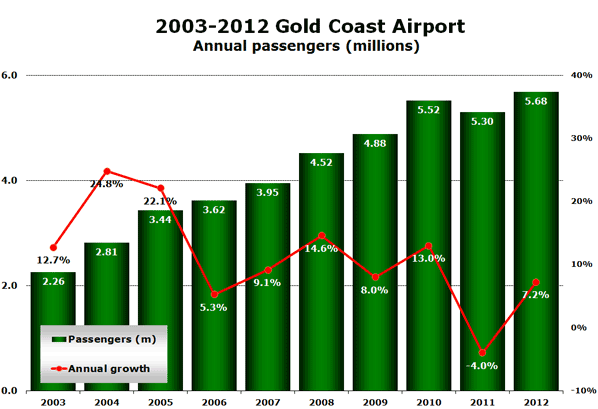 Passenger numbers have grown from 2.2 million in 2003 to over 5.6 million last year, making it the fastest growing airport in Australia in the last decade. Over this period, a passenger volume decrease was noted only once, in 2011 (-4%), with growth quickly restored in 2012, resulting in a traffic increase of 7% over the preceding year. Examination of the early capacity data for 2013 shows that the airport is set to break through the six million mark this year.

Seasonality pattern yet to be fully addressed 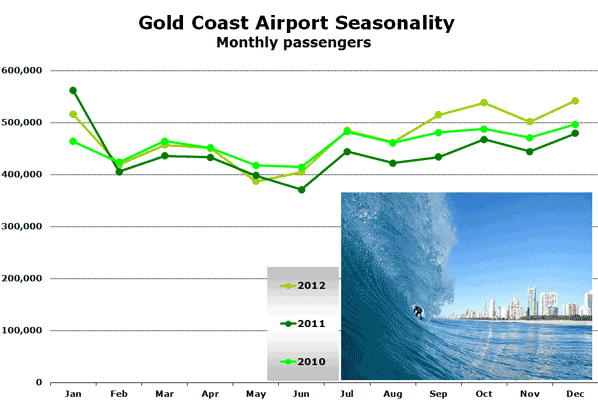 While Gold Coast’s Airport’s monthly passenger movements show a fair amount of fluctuation (akin to the region’s world-famous waves), the airport has made some progress in reducing monthly variance from 34% in 2011 (between peak month of January and low month of June) to 29% recorded in 2012 (December versus May). However, this indicator remains much higher than that of the similarly sized Adelaide, where monthly traffic variance of only 13% was found in the recent anna.aero analysis. The limited presence of full-service carriers at Gold Coast (only 10% of total weekly departures) leaves the airport prone to the more seasonal nature of low-cost services, making the flattening of the seasonality profile more difficult.

80% of seats dedicated to Jetstar and Virgin

Two home-grown low-cost carriers account for more than 80% of weekly seats available at Gold Coast. While the dominance of the market from Gold Coast by the Qantas Group-owned Jetstar and Virgin Australia has been somewhat reduced from 92% a decade ago, to around 80% in April 2013, strong rivalry between the two carriers persists. Indeed, Virgin Australia’s entry into the market in 2002 posed a formidable threat for Qantas, which in 2005 went on to replace most of its capacity at the airport with Jetstar-operated services. 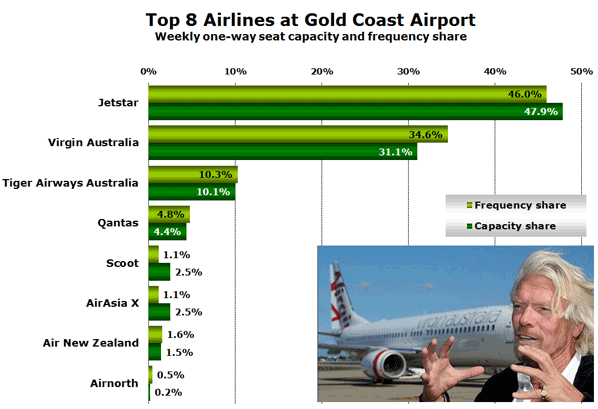 Tiger Airways Australia is the carrier which has added the most capacity over the course of last year, although it handles considerably lower traffic volumes than the two leading carriers. Examination of Innovata data shows that the airline will provide twice as many flights in April 2013 than it did a year before.

Sydney has 50% capacity; International services – only 14%

Gold Coast’s network has a strong regional focus, with an average sector length of 3,000 kilometres, and Sydney being the busiest destination. The joint dominance of Jetstar and Virgin Australia on the Sydney route was ended last year by Tiger Airways Australia. The new entrant plans to boost frequencies to 26 weekly this April. 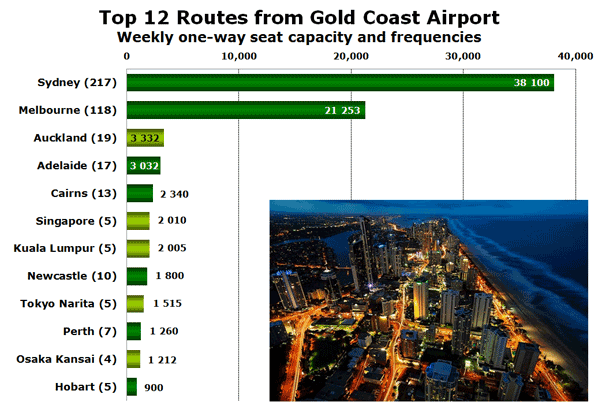 Qantas has also reacted, and after a three-year break, it is returning to the Sydney-Gold Coast city pair with thrice-daily operations. In addition, Jetstar responded by adding 8% to its capacity on the route. As a result, as much as 30% more seats are offered overall in the market from Gold Coast to Sydney this April as compared to the preceding year, accounting for a half of total scheduled capacity from the airport.

Even though 26% more international seats are offered in April 2013 compared to the same period last year, this segment only accounts for 14% of the airport’s traffic. Gold Coast’s first long-haul route was AirAsia X’s Kuala Lumpur service, launched back in 2007. A total of four long-haul routes are currently offered at the airport. The latest long-haul arrival is Scoot, with its offering to Singapore, which after only 10 months of operation has become the #1 in the long-haul market from Gold Coast.