SkyWest Airlines continues to defy the crisis; grows by 5% in 2012; starts partnership with American Airlines 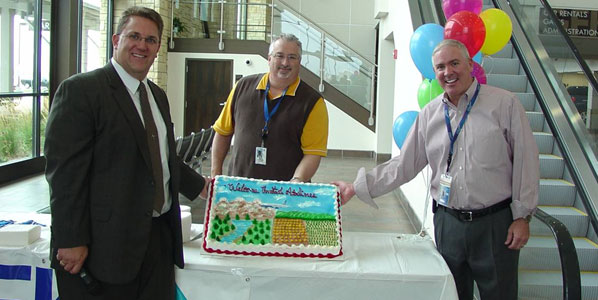 While technically SkyWest Airlines is a major carrier, posting annual revenues of more than $1 billion and operating a mixed fleet of 327 regional turboprop and jet aircraft, it has long focused on serving markets at a regional level. The airline has been around since the early 1970s, and nowadays, the majority of its business comes from contract flying for other major airlines. Furthermore, during the Farnborough Air Show in July 2012, the airline sealed a $4.2bn deal for 100 MRJ90s, with options for a further 100. These are scheduled for delivery beginning in 2017.

According to data published by the US DoT, at 24.4 million passengers, SkyWest’s traffic grew by a quarter in 2011 when compared to 2006, a year in which the airline welcomed 19.5 million guests. In this period, in spite of unfavourable economic conditions in the US, the airline noted decline in traffic only once – in 2008 – when passenger numbers fell by 5.5%. 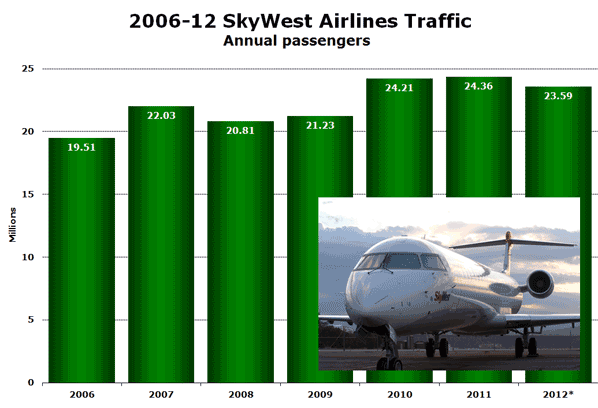 2007 traffic levels were more than recovered by the end of 2010, when the airline passed the 24 million mark, following annual growth to the tune of 14%. In the next year, passenger numbers increased marginally (+0.6% vs. 2010), and while the full data for 2012 has not been published yet, SkyWest carried 5% more passengers in the first 11 months of 2012 than in the same period the year earlier. 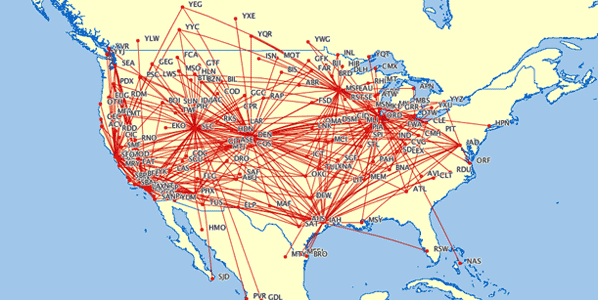 Despite its brand being largely unknown to the flying public outside the US, SkyWest Airlines has been around for over four decades now, largely selling its services to other major US airlines - United Airlines and Delta Air Lines are its biggest customers.

Analysis of capacity data provided by Innovata reveals that in April 2013 SkyWest will dedicate as much as 55% of its capacity to United Airlines, for which it flies under the United Express brand. Delta Air Lines is its second-largest airline partner, taking up a further 34% of SkyWest’s weekly seats in April 2013.

Importantly, American Airlines’ decision last year to turn its fully-owned subsidiary, American Eagle, into a brand rather than maintaining it as an actual airline (which previously was the trademark of American Eagle, as American’s only other regional contractor, Chautauqua Airlines, flies under the AmericanConnection brand), created new business opportunities for SkyWest. The carrier, which had seen some of its capacity freed up earlier last year after Delta downgraded its capacity requirements for 50-seater aircraft, signed a partnership agreement with American. As a result, in April 2013, SkyWest will operate a total of 13 routes from Los Angeles, on behalf of American, an easy enough task, since it also has a considerable operation at the California airport for both United and Delta.

LAX has the most frequencies; Salt Lake City – the most seats

The American deal has helped Los Angeles to become the busiest airport in SkyWest’s network in terms of weekly departures. Around 26% of the regional carrier’s weekly departures from the airport are carried out under the American Eagle brand, pushing its Delta Connection business to third position (22%). Its partnership with United under the United Express brand, still provides more than half of the carrier’s presence in Los Angeles. 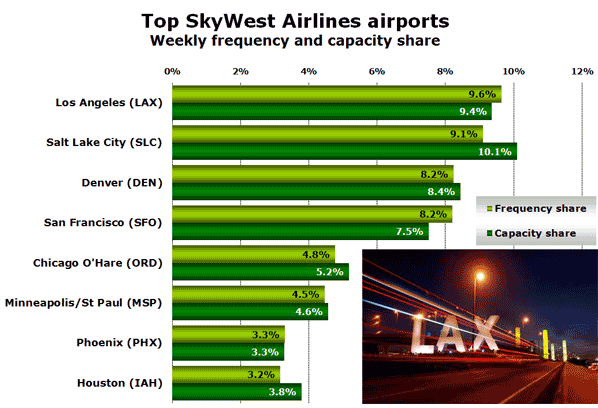