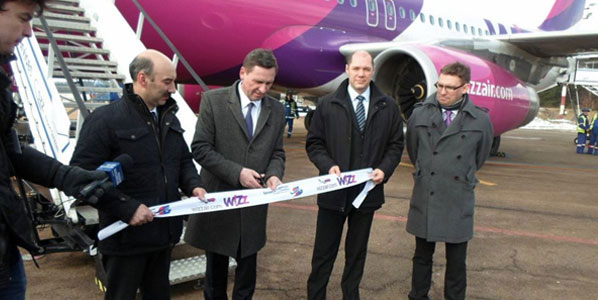 Stavanger Airport became one of the two destinations launched by Wizz Air last week, as the airline inaugurated its presence in the north-western Polish airport in Szczecin. The Hungarian carrier is now the largest capacity provider on routes from Stavanger to Eastern Europe.

For a city with a population of less than 150,000, Stavanger has an extraordinarily busy airport, which in 2012 handled as many as 4.4 million passengers. The majority of this traffic comes from the oil industry, for which Stavanger serves as a major hub, owing to its location near the North Sea oil fields. Major oil companies have their offices in close the proximity to the airport, including the state-owned petrol giant, Statoil. Combined with a significant proportion of affluent residents with high propensity to travel in its catchment, Stavanger Airport has stayed clear of major traffic losses in the aftermath of the global economic downturn and follows a path of solid growth.

According to data published by the Norwegian airport operator, Avinor, traffic at Stavanger Airport has been growing steadily in all of the years of the last decade, except for 2009, when a decrease of -3.3% was noted. However, at 3.62 million passengers handled in 2009, the number of passengers handled remained above the 2007 level of 3.53 million. 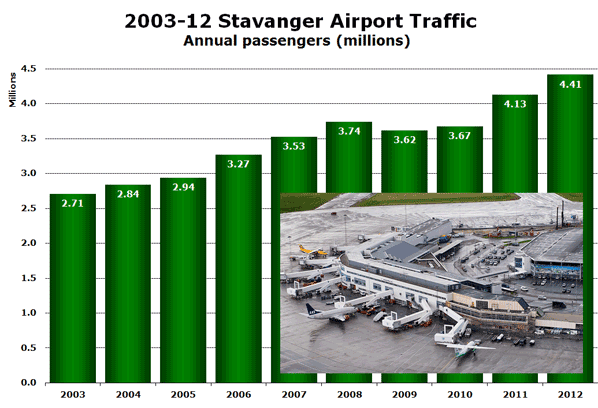 While traffic recovery seemed sluggish in 2010 with only 1.6% more passengers using the airport than in the preceding year, 2011 saw a leap of 12.4%, which led the airport to pass the 4 million mark for the first time ever. Its growth trend continued at a slower pace in 2012, when the airport’s traffic grew 6.8% up to 4.4 million, and this pattern is set to persist in 2013, with the first two months of traffic increasing by 7.8% and 6.9% respectively.

Top destinations are in Scandinavia

Analysis of capacity data available from Innovata shows that a total of 34 destinations will be offered by airlines from Stavanger in April 2013. Of those, only three fall outside Northern and Central Europe – Alicante and Málaga (offered by both Scandinavian Airlines (SAS) and Norwegian with twice- and single-weekly frequencies respectively), as well as Barcelona (twice-weekly by Vueling). About a third of destinations enjoys more than daily frequencies, often as a result of competing offerings from two or more airlines. 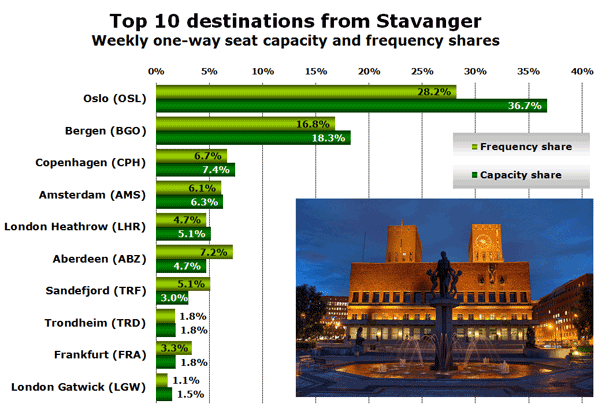 Unsurprisingly, Oslo is the largest destination from Stavanger and accounts for a 28.2% of frequencies and 36.7% seats. SAS and Norwegian compete in this core domestic market, offering 94 and 67 weekly flights respectively on the route in April 2013. However, Norwegian is operating with larger aircraft, which means that the airline offers only 14% less seats in the market than its competitor, compared to 29% less frequencies. Another domestic destination and the country’s second-largest city, Bergen, commands roughly half of the capacity (both in terms of frequencies and seats) offered from Stavanger to Oslo.

While no other destination accounts for more than 10% of the airport’s capacity, three large European hubs are served with high frequencies – Copenhagen (SAS: 38 weekly flights), Amsterdam (KLM: 35), and London Heathrow (British Airways: 14; SAS: 7).

While a total of 14 airlines operate at Stavanger Airport in April 2013, the airport is hugely dominated by two carriers, SAS and Norwegian, which account for 64% of weekly frequencies and as much as 76% of seats. Both carriers increased their offering in the course of last year: SAS added services to Málaga (1 weekly frequency), Paris CDG (4) and Stockholm Arlanda (15), while Norwegian launched Manchester (2) as its only new route from Stavanger since April 2012.

The carrier with the most growth in the period since April 2012 is Danish Air Transport (DAT), which complimented its previously existing eight weekly service to Billund (itself up to nine weekly in April 2013) with three domestic routes. It now operates nine weekly flights to Oslo Rygge, as well as four-weekly each to Florø and Skien.

While Norwegian has partially explored the growing market from Stavanger to Eastern Europe with services to two Polish destinations (twice-weekly each to Warsaw and Kraków), Wizz Air has emerged as the leading operator. While the Hungarian carrier succumbed to competition from Norwegian on the route to Warsaw, it added thrice-weekly flights to Vilnius and last week, also twice-daily to Szczecin. Wizz Air also continues to offer thrice-weekly departures to Gdańsk and twice-weekly to Katowice.