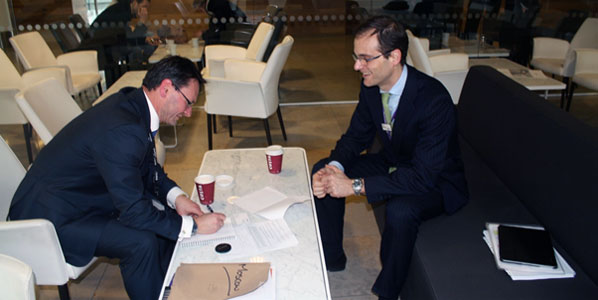 Lopez: “I cover all the revenues opportunities from retail, to property, to aviation, and I deal with passenger marketing – airline trade relations directly produce 60% of our revenues.”

anna.aero: “But Heathrow is famously the most constrained major airport in the world – you have around 160 destinations versus Frankfurt with 230+ – what can a commercial director really do here, apart from improve duty free sales?”

Lopez: “Well it’s no secret what we’d really like to do, but we still started four new routes this year and we managed eight last year – and we do have some real triumphs – we are very proud of China Southern’s Guangzhou-Heathrow launch – it took years and years to get this done…and to get the slots – we had to work very hard.”

anna.aero: “If it’s this hard why are airlines still queuing up to get in to Heathrow when they could go elsewhere in London and Europe?”

Lopez: “Well for a start the airlines are able to make much more money here. London is in big demand and airlines also need the transfer traffic – our European and Middle East competitors have good transfer flows but their cities are not all in demand to the same global scale that London is. These are two combined advantages that other airports in London, Europe and the Middle East simply don’t all have.

anna.aero: So the passengers really like Heathrow after all too?

Lopez: Well it is fashionable to say they don’t, but it’s just not true – they appreciate that Heathrow is close to the city, that we have great surface access and world class facilities – 60% of passengers will soon be using the brand new facilities of Terminal 2 and T5. And the passengers do agree with this – in our ASQ scoring 73% of passengers rate us as ‘very good’ or ‘excellent.’

anna.aero: “Are you concerned that the airlines will change their views if you don’t get further capacity?”

Lopez: “We obviously need the capacity – the UK is losing billions in lost investment and tourism because we don’t have it – but we notice that the airlines still confidently continue to invest here – recently Etihad paid £50 million ($75 million) for Jet Airways’ three slot pairs at [although Jet continues to use them] – it makes us very happy that carriers are investing this way in Heathrow – it reflects their faith that they are able to make money and that Heathrow is good future value.” 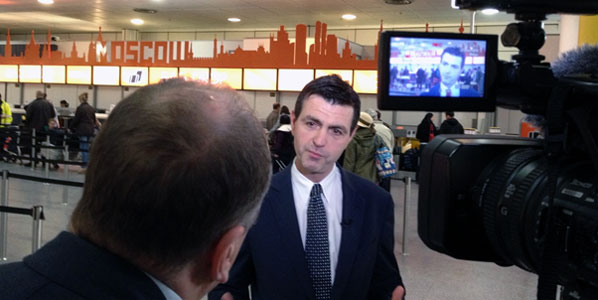 Guy Stephenson is interviewed at the Gatwick-Moscow launch: – “The Moscow service means we now serve four of the eight-fastest growing economies in the world.” (See anna.aero’s footnote)

anna.aero: “So you must be pretty pleased to have easyJet-Moscow – you have effectively poached this Moscow service from Heathrow?”

Stephenson: “Yes, we’ve really focused Gatwick on business traffic development – so the Moscow service means we now serve four of the eight-fastest growing economics in the world.” (See our footnote)

anna.aero: “So you continue to roar ahead with easyJet, but why has Ryanair cut back so many of its routes? It only has about five left now…”

Stephenson: “We’d like to see more Ryanair…but they are always chopping and changing, here and elsewhere….”

anna.aero: “Now easyJet is by far the largest airline at Gatwick, what do you see as the future of British Airways – especially with your very strong business traveller ambitions?”

Stephenson: “We’ve seen significant change by BA – it has outsourced, cost-cut and restructured its route network, added more capacity in the leisure sector, and introduced the A319…overall the re-start is working for Gatwick very well.”

anna.aero: “And what about the implications for Virgin Atlantic flights once Delta gets heavily involved, bearing in mind Delta’s long association with the airport ended a year ago?”

Stephenson: “We do hope to see positive change as Delta and Virgin look at how best to develop their relationship with us – we think they have a lot to play for at Gatwick.”

anna.aero: “But it’s quite a challenge to get LGW slots – so do you think you have a decent chance of a second runway after the Davies Commission delivers its recommendation on London airports and your legal obligation not to build one runs out in 2019?”

Stephenson: “We’ve indicated our intent to put a strong case for the next London runway – we believe in choice and a second Gatwick runway would deliver that; whereas a third Heathrow runway would just be more of the same.”

Of the BRIC economies, Gatwick has no scheduled services to Brazil or India and, of the MIST countries, only Indonesia is not served – so presumably, this assumes Korean’s Seoul service is not re-starting this summer. We also assume Stephenson did not literally mean the “eight-fastest growing economies in the world”– in 2012 these were: Libya (last served by Afriqiyah just before the war in 2011), Sierra Leone, Macau, Niger, Mongolia, Afghanistan, Iraq, and Timor-Leste.