Air Seychelles turns itself around and turns a profit; new services to Hong Kong launched this week 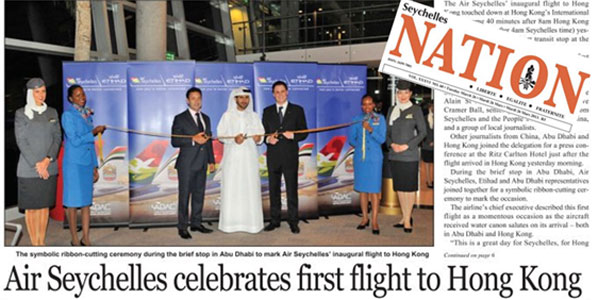 The national carrier of the Seychelles, Air Seychelles was founded more than four decades ago and operates a mix of inter-island and international services, has over recent years faced mixed fortunes. Most recently, the airline incurred three years of heavy losses, forcing it to considerably reduce its network as funding became an issue. Last year, the trend reversed however, when Etihad Airways bought a 40% stake in the carrier, providing an important strategic link. Importantly, a total of 19 codeshare destinations were introduced, opening up markets such as Europe, and the arrival of A330-200s leased from Etihad meant that Air Seychelles was able to upgrade its onboard product.

Capacity improves in 2013, but still a third less than a decade ago 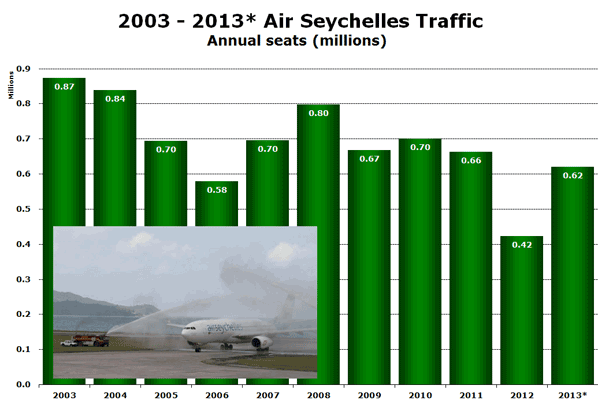 Examination of annual capacity data provided by OAG Schedules iNet reflects the ups and downs of Air Seychelles in the course of the last decade. Almost 0.9 million seats were offered by the airline in 2003, but a third of this capacity was lost by 2006. The following years were a mixture of capacity expansion and reductions, but the airline’s seat volumes have never exceeded 0.8 million since. In fact, in 2012 the carrier shrunk its offering by as much as 51% compared to 2003, as the airline ran into fresh financial troubles. Air Seychelles’ CEO, Cramer Ball, commented on the 2012 downsizing: “In the first instance, the airline’s turnaround meant looking at the cost-base, and then stripping down the business right across the airline’s operations to find the right shape and size for our national carrier.”

Abu Dhabi and Hong Kong the only new destinations this year; codeshares are vital

In June 2013, Air Seychelles will operate a modest network of five routes. Only one of those – the thrice-weekly service to Johannesburg – remains from the airline’s 2003 network, showing the extent of the route rationalisation that has taken place. Most of the airline’s network has been done away with, most notably its European presence – Frankfurt (1 weekly flight in summer 2003), Munich (1), London Gatwick (1), Paris CDG (5), Rome Fiumicino (2) and Zürich (1). Twice-weekly flights to Dubai and the weekly service to Singapore were also amongst casualties.

Importantly, the airline’s international reach has been partly restored following the equity alliance with Etihad last year, when the two airlines signed codeshare agreements on services to a number of destinations, including some of the European destinations previously served by Air Seychelles. But the cooperation with Etihad is beneficial to both partners, as Hong Kong had not previously been served by the Middle Eastern carrier. This was recently confirmed by James Hogan, Etihad Airways’ CEO, who commented: “The new codeshare is a win-win for both airlines. It gives Etihad immediate access to rich sources of passenger and cargo revenue and the airline’s contribution to sales helps Air Seychelles to maximise its return on capital as it works with national tourism bodies to accelerate tourism growth from the Hong Kong and southern China area.” While Air Seychelles does not plan more new routes this year, a codeshare agreement with airberlin, also part-owned by Etihad, was inked in February and will further improve the airline’s presence in Germany.