Cyprus economy and Cyprus Airways both in danger of collapse; Paphos boosted by Ryanair base opening last April Ryanair’s COO & Deputy CEO Michael Cawley was on hand last January, along with then CEO of Hermes Airports Alfred van der Meer, to announce Paphos as the airline's 50th base. Flights started in April and helped the airport to increase passenger numbers by 26% last year. This summer, Ryanair has added five new destinations from the airport, while discontinuing four others.

Despite another disastrous year for Cyprus Airways (annual revenue was down 18% in 2012 as capacity was severely cut), combined passenger traffic at Larnaca International and Paphos International airports in 2012 still grew by 1.7%, to an all-time high of 7.4 million. This growth, however, was not spread evenly across the two airports; Larnaca saw its traffic fall by 6% to 5.2 million, while Paphos reported a 26% improvement in passenger throughput to 2.2 million, primarily thanks to becoming Ryanair’s 50th base in April 2012. 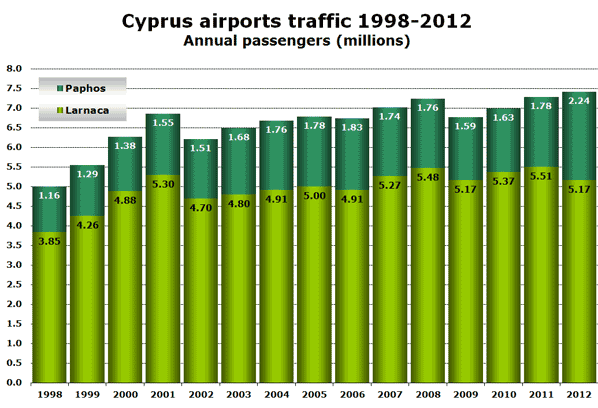 Since joining the EU in May 2004, passenger numbers at the country’s two airports have grown by just 11% in eight years. Since May 2006, Hermes Airports Ltd has assumed management and control of the two main airports under a 25-year BOT (Build-Operate-Transfer) concession agreement with the Republic of Cyprus. Hermes is a Cypriot company, which consists of nine shareholders, including Aer Rianta International, Vantage Airport Group and Nice Airport, though the biggest shareholders are a couple of French infrastructure and construction companies who own a combined 42%. Since 2006, Hermes has delivered new terminals at both Paphos (November 2008) and Larnaca (November 2009) airports. At the beginning of this year, Hermes appointed Canadian Craig Richmond as its new CEO, replacing Alfred van der Meer.

Extreme seasonality a major issue at Larnaca and Paphos

Both airports suffer from fairly extreme seasonality, as they are catering primarily to inbound traffic. With a population of less than one million, the outbound market is relatively small, and the airport is heavily reliant on the inbound tourism market, which explains the seasonality profile. 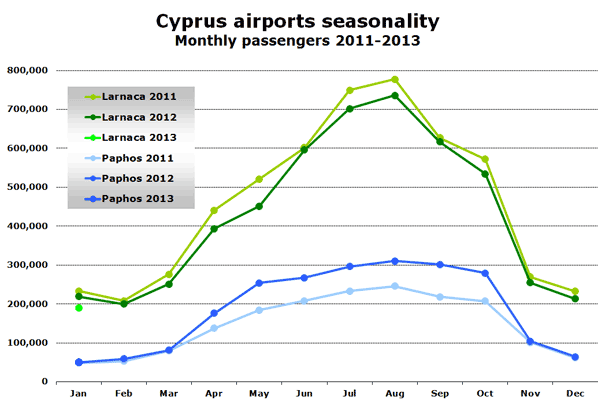 The peak to off-peak ratio (August to February) at Larnaca was 3.7 in both 2011 and 2012. However, at Paphos this ratio (August to January) has increased from 5.1 in 2011 to 6.1 in 2012, thanks to the addition of Ryanair’s services which mostly only operate during the peak summer months.

Ryanair first started serving the Cypriot market in late 2010, when it began flights from its Brussels Charleroi and Girona bases to Larnaca, followed by Bologna and Weeze services to the same airport the following April. Then, in January 2012, the LCC announced that Paphos would become the airline’s 50th base and two aircraft were stationed there from April, operating to 15 destinations. Only one of these was in the UK, a market that during the previous decade had accounted for between 70% and 80% of traffic at the airport. During the recent winter season this was cut back to just four destinations (Chania, London Stansted, Milan Bergamo and Thessaloniki), but increases to 16 destinations during the summer 2013 season. Services to Frankfurt Hahn, Memmingen, Pisa and Venice Treviso are dropped in favour of new routes to Bologna, Brussels Charleroi, Girona, Manchester and Weeze. All of these new destinations will be served with just one or two weekly flights. In the peak season, Ryanair will operate 43 weekly departures from Paphos this summer, compared with 46 a year ago. It no longer operates any flights to Larnaca.

The national carrier, Cyprus Airways, is in dire financial straits. Its latest financial figures reveal an operating margin of negative 28.3% in 2012, as revenues fell by 18%. This is more than twice as bad as the minus 12% operating margin it achieved in 2011, when it sold some Heathrow slots to Virgin Atlantic for €22 million. Having disposed of its two widebody A330s at the end of 2011, the carrier replaced them with a couple of A321s, keeping the fleet size at 11 aircraft. However, the A321s are apparently going to be handed over to Monarch at some point this summer, leaving the carrier with a fleet of just nine aircraft; two A319s and seven A320s. According to ch-aviation, three of the A320s are not even based in Cyprus, but are operating domestic routes in Greece.

This summer the airline is planning to operate just 17 routes from Larnaca to mostly European destinations, plus Beirut (Lebanon) and Tel Aviv (Israel). Athens (with three daily flights) and London Heathrow (two daily flights) account for 35% of weekly seat capacity, with Tel Aviv and Thessaloniki the only other destinations served every day of the week. If Cyprus Airways were to collapse, the only destinations not already served by other airlines are Amsterdam, Paris CDG, Rome Fiumicino and Heraklion. Given how quickly airlines responded to the demise of Malev in Budapest just over a year ago, passengers are unlikely to be left without travel options to these destinations for long.

All of these flights will serve Larnaca. Three of the routes are to UK airports, four to destinations in Central/Eastern Europe, and one to Italy. In the case of Aegean Airlines, the London Gatwick service replaces its existing daily flight London Heathrow.