Japan's two biggest airlines both used 787s to launch new routes to California during the winter season; ANA to San Jose, and JAL to San Diego. In response to the grounding of the 787s, JAL has decided to serve the route with 777s instead, while ANA has suspended its service until the 787s are flying again.

The number of domestic passengers carried by Japan’s two major airlines, ANA and Japan Airlines (JAL), increased by 5.7% in 2012, but this figure is distorted by the significant drop in domestic demand in early 2011 as a result of the earthquake and tsunami which affected part of the country. However, when compared with 2010, domestic passenger numbers were down 7%. Fortunately there is some evidence to suggest that the decline in domestic demand may have been arrested, undoubtedly due in part to the launch during 2012 of not one, or even two, but three new low-cost carriers (LCCs) – AirAsia Japan, Jetstar Japan and Peach. 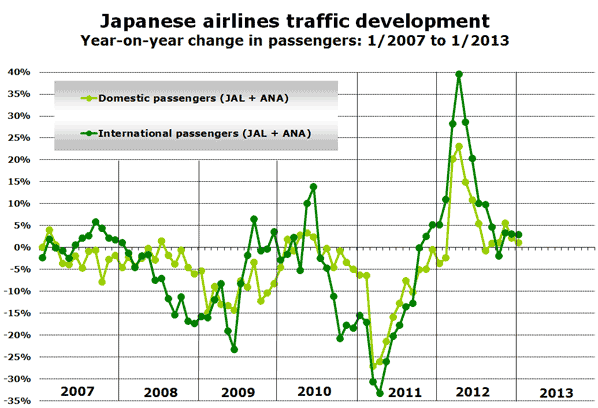 Domestic capacity up 7.8% at start of summer season

Schedule data for April indicates that year-on-year domestic capacity has risen by 7.8%, with ANA and JAL growing their seat capacities by 6% and 4.3% respectively. The three new LCCs now have a combined capacity share of 4.1%, with Jetstar Japan currently leading the way among the newcomers with 2.0% of the market, followed by Peach (1.5%) and AirAsia Japan (0.6%). The airline that appears to have been hit hardest by the emergence of the new LCCs, is third-ranked Skymark (in terms of seats), which is reporting a 12% reduction in domestic seat capacity.

787 grounding to affect international growth in 2013

ANA and JAL combined also reported a 12% growth in international passenger numbers last year, but again this figure is distorted by the events of early 2011. When compared with 2010, their cumulative international traffic was down 5.2%. The grounding of their 787 fleets has impacted ANA and JAL’s plans for growth in 2013, with JAL using the aircraft to launch flights between Tokyo Narita and San Diego in December 2012, and ANA using its 787s to introduce flights to San Jose in mid-January. While JAL continues to operate the route to California with 777s, ANA has temporarily suspended its service to San Jose, until the 787 is able to resume flights.