Etihad Airways became the last of the 'MEB3' carriers to serve Lagos when flights to Abu Dhabi began last July. Lagos is still ranked the fourth biggest airport in Africa despite the collapse last September of Air Nigeria, and the downsizing of Dana Air.

Nigeria’s Murtala Muhammed International Airport currently ranks as the fourth biggest in Africa (based on scheduled seat capacity), behind Johannesburg, Cairo and Cape Town, and just ahead of Casablanca and Nairobi. The collapse last September of Air Nigeria (once known as Virgin Nigeria), and the downsizing of Dana Air following a fatal accident last June, means that seat capacity in Lagos is down 13% compared with March 2012, according to schedule data filed with OAG. In 2011, the airport handled over 6.7 million passengers, but it seems unlikely that this mark was beaten in 2012. 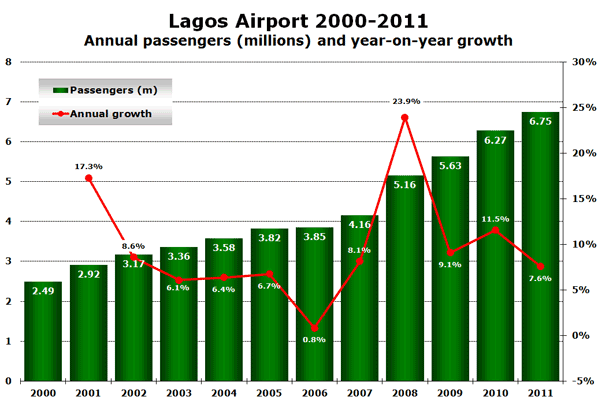 Unusually, the airport’s busiest month of the year is December. This may be driven by the non-local workers in the oil industry returning home for Christmas.

Around two-thirds of all flights (over 400 weekly departures) at Lagos airport are destined for other Nigerian airports, primarily Abuja (150 departures) and Port Harcourt (80 departures). These flights also account for almost 60% of weekly seat capacity at the airport. The two leading domestic airlines are Arik Air and Aero, with Dana Air still operating just a single route between Lagos and Abuja.

Of the top 12 international country markets (as measured by weekly seat capacity), just three are to other African nations (Ethiopia, Ghana, and South Africa). The leading non-African country markets are the UK, the UAE and the US. Arik Air, British Airways and Virgin Atlantic all operate daily flights to London Heathrow airport. Last July, Etihad Airways joined Emirates Airline in serving the United Arab Emirates when it began six weekly flights to Abu Dhabi. Emirates serves Dubai with twice-daily flights. In the US, Atlanta (Delta Air Lines), Houston (United Airlines) and New York JFK (Arik Air) are all served with non-stop flights from Lagos.