Jet2.com  first landed in Pula last year with services from Manchester, but found the cooperation so gratifying that it will add three further destinations this summer – Glasgow, Leeds/Bradford and Newcastle.

Located in the south of the Istria peninsula in the north-west of Croatia, Pula has a population of around 60,000 and – similarly to the rest of the country – is praised throughout Europe for its crystal-clear sea, mild climate and unspoiled nature. Unsurprisingly, Pula has long been popular with northern Europe’s tourists, who flock to the area each summer. In 2013, even more tourists are anticipated, as Croatia joins the European Union on 1 July 2013.

Only one daily flight in the weakest month

In 2012, Pula Airport handled 367,455 passengers, which constitutes an increase of 4.1% over the preceding year. Last year’s growth was slightly less dynamic compared to the previous years, when the annual increases averaged 5.5% in 2010 and 8.9% in 2011. Similarly to the country’s other airports, available traffic data shows the extreme seasonality pattern that reigns at Pula with as much as 48% of 2012 traffic concentrated over the two peak summer months of July and August. 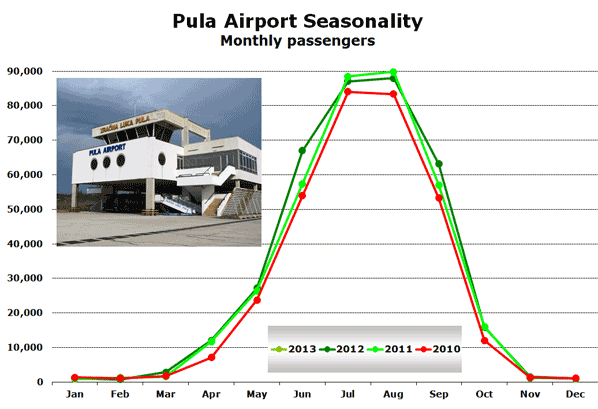 Interestingly, while the busy season seems to be gradually lengthening with ever more passengers choosing to travel in spring and autumn, in the weakest winter months of January and February, the airport has only one daily flight – the Q400-operated Croatia Airlines service to Zadar.

Analysis of Innovata capacity data for July 2013 reveals that Ryanair, which serves Pula from five bases (Frankfurt Hahn, London Stansted, as well as Brussels Charleroi and Paris Beauvais (which re-started last week) twice-weekly each; Oslo Rygge – thrice-weekly), is the largest airline at the Croatian airport in terms of weekly seats (26.5%), even though the number of seats it provides remained unchanged compared to the same month of 2012. A quarter less weekly seats (slightly more than 1,500) are marketed by Croatia Airlines, which is the airport’s largest carrier in terms of weekly frequencies (30% share). 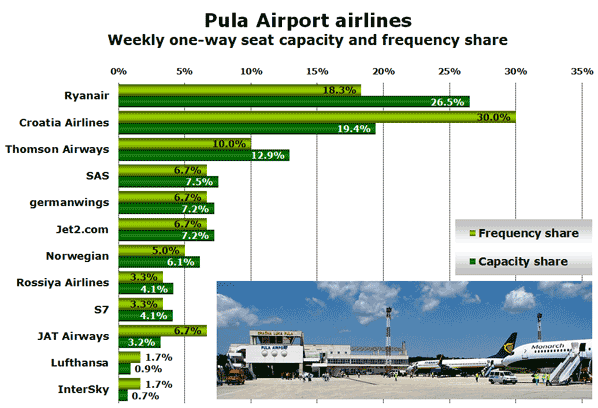 The British LCC Jet2.com is the fastest growing carrier at Pula this summer, as it adds three new routes to its offering in addition to the weekly Manchester service it operated in the previous year. Summer 2013 will also see single weekly frequencies operating from Glasgow, Leeds/Bradford and Newcastle.

Flights to a total of 26 European destinations will be offered from Pula this summer. Notably, only three of these will be non-monopoly routes – Oslo (Norwegian – 2 weekly frequencies; SAS – 1), Manchester (Thomson Airways – 2; Jet2.com – 1), Stockholm Arlanda (Norwegian, SAS – 1 each). This is one less compared to summer 2011, following Transaero’s decision not to reinstate its weekly service to Moscow Domodedovo, effectively leaving the market to S7, which continues to operate twice-weekly departures on the 2,100-kilometre route. 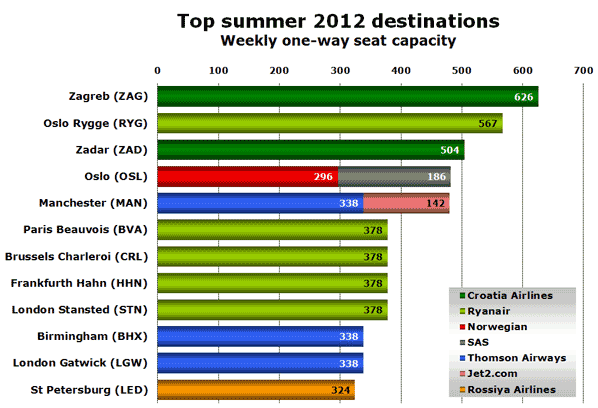 While Croatia Airlines’ eight weekly flights to Zagreb make it the busiest destination from Pula in terms of weekly frequencies, Oslo is the largest market as measured in weekly seats. Serving the Oslo market with services to Pula are three carriers – the already mentioned Norwegian and SAS from the main Oslo airport, and Ryanair from Oslo Rygge.

Closing the #12 list is St Petersburg, to which Rossiya Airlines operates twice daily services; the same frequency, but marginally less seats are offered by S7 on its Moscow route, leaving it out of the list. Another Russian destination, Moscow Sheremetyevo, which last summer season was offered by Transaero with weekly frequency, disappears from Pula’s network map this summer.