Sunwing Airlines: Grew by 30% in the last year; European adventure is over 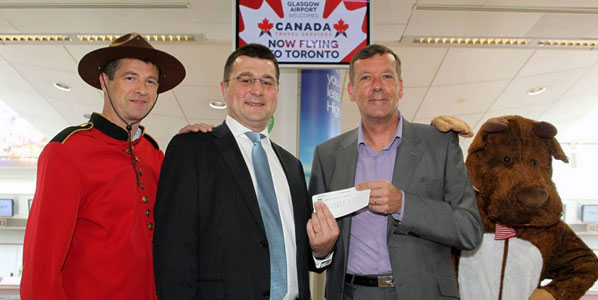 European routes arrested: For the last two summers, Sunwing Airlines broke-out into seven European markets in five countries (Summer 2012), including Glasgow in the UK (pictured here). However, this heist of long-haul passengers from its long-term foe Air Transat, has been thrown back into network planning jail for summer 2013.

Toronto-headquartered Sunwing Airlines flies Canadian sunseekers to predominantly the US, Mexico and Caribbean resorts, using a fleet of 28 737-800 aircraft on behalf of its parent, Sunwing Travel Group (STG). However, its fleet size varies significantly during the year, as the airline is currently leasing in 17 aircraft during the peak Canadian vacation season from European airlines like Thomson, Jetairfly, Tuifly and Travel Service. Indeed, many aircraft come from the TUI family of airlines, as TUI Travel is a 49% owner of Sunwing. In the coming weeks, the leased aircraft will return to their owners, along with some of its own aircraft (four are heading to Thomson for example between April-October), to provide further peak capacity in readiness for the European summer vacation exodus. 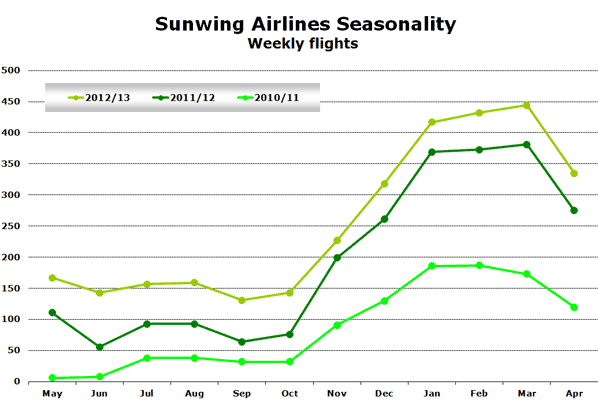 Having launched in 2005, Sunwing has worked hard over the last three years to reduce the huge seasonal swings in its capacity, while also growing by nearly 200% in terms of its annual flights. During the 2010/11 period, the total number of flights available during its peak operational weeks were 30 times larger than those offered during a week in the airline’s low season. In the year ending April 2013, the carrier had reduced this variance down to a far more acceptable level, with its busiest month (March 2013) being just over three times larger than its quietest (September 2012). While being able to off-load further capacity was probably a secondary consideration, in February last year, STG acquired 100% of the Atlanta-based Vacation Express. As the US tour operator’s peak selling period is during the summer months, this has allowed Sunwing to move further aircraft out of Canada during its off-season. 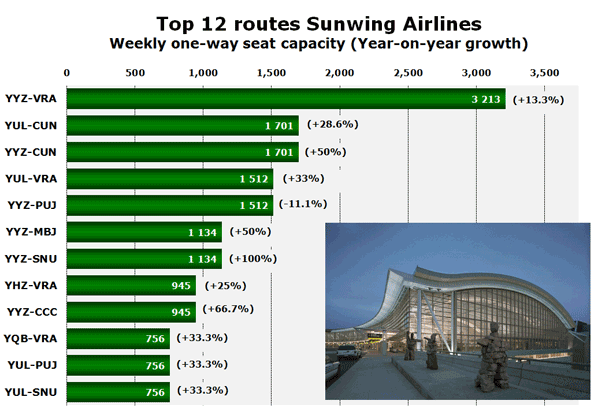 In terms of the airline’s most significant destinations, Varadero and Cancún slug it out for supremacy; however, it is the former that leads the way, with 27% of Sunwing’s weekly flights arriving in the Cuban resort town in the province of Matanzas, compared to 16% for the Mexican holiday hot-spot located on the northeast coast of the Yucatán Peninsula. Taking #3 spot is Santa Clara, also in Cuba.

Overall, according to Innovata data for April 2013, Sunwing operates from 14 points in Canada and the US (Cincinnati), with its home territory of Toronto also being its most important base, with 45% of carrier’s flights originating from the Ontario hub. Canada’s second largest city of Montreal is also #2 for Sunwing, with one in five flights starting from the city in the Canadian province of Quebec, with the province’s capital, Quebec City, sharing third place with Halifax in Nova Scotia, both with 8% of the airline’s departures.

Using April 2013 as the baseline for the data, Sunwing currently flies to seven destinations in Cuba, which has pushed the Caribbean island to the top of the pile in terms of country markets for the carrier. Indeed, as recently profiled by anna.aero, Sunwing is the #1 airline in Cuba, operating more weekly seats than national airline Cubana. With four points served in Mexico, (Cancún, Puerto Vallarta, Huatulco and San José del Cabo), this country market is more than double the size of next largest markets of the US (four destinations) and Dominican Republic (two). 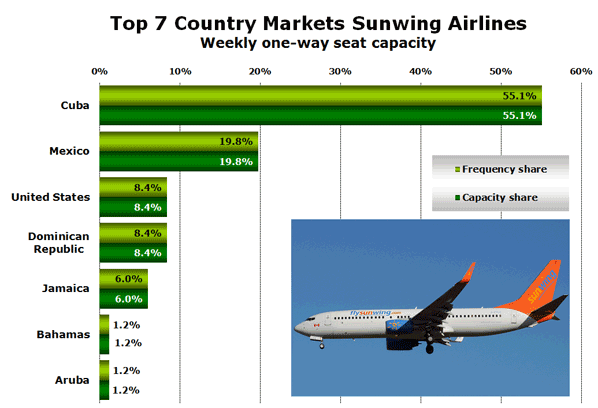 For the last two summers, Sunwing has leased in wide-body capacity for flights into Europe – operating in summer 2012 a combined 12 weekly frequencies to Spain (Barcelona), France (Paris Orly), Italy (Rome Fiumicino), Portugal (Lisbon and Porto) and the UK (Glasgow and London Gatwick) – in competition with its biggest rival Air Transat (in Summer 2011 it also flew to Dublin, Ireland, but not to Glasgow or Barcelona). However, the two 767-300 aircraft seem set to be staying with Portuguese owners EuroAtlantic Airways this summer. Despite this bloody nose on its foray into Europe, Sunwing’s rapid rise continues unabated in its traditional route strongholds as it nears the end of its peak season.