anna.aero's Chief Analyst Ralph Anker was invited to attend the  celebrations at Istanbul Sabiha Gökçen International Airport to mark the decision by Turkish Airlines to develop the airport as a second base , serving the Istanbul market. The airport's CEO Gökhan Buğday kindly took the time to answer some of our questions.

anna.aero: Turkish Airlines has finally decided to make Sabiha Gökçen International Airport (SGIA) a second base in Istanbul starting this weekend. How come?

Bugday: We are delighted to welcome Turkish Airlines’ growth at SGIA. They have offered domestic flights with their low-cost subsidiary Anadolujet for some time, but this marks a new era for the airline at the airport. With an increasing number of people living on the Asian side of Istanbul, Turkish Airlines has recognised that it is some extent a different market that needs to be served, so starting with this summer season it will be serving 13 international destinations from the airport (major Western European cities such as Amsterdam, Düsseldorf, Hamburg, London, Milan, Paris and Vienna, as well as Baku, Ercan, Kiev, Kuwait, Tehran and Tbilisi) thus confirming SGIA as ‘the passenger’s choice’ airport.

anna.aero: What are the main advantages of SGIA compared with Istanbul Atatürk airport?

Bugday: Atatürk has to some degree become a victim of its own success. It is now Europe’s fourth busiest airport (after Heathrow, Paris CDG and Frankfurt) and the airport has little scope for expansion. The runway layout is not ideal for so many flights, and as a result punctuality is a growing problem. Here at SGIA we are able to provide an environment that results in excellent punctuality for our airlines. At the same time, with a single terminal and convenient parking, passengers can get from their cars to the aircraft gate in 15-20 minutes. Also thanks to good road links and the urban growth on the Asian side of Istanbul, many more people are finding us a more convenient airport to use. Being located near the city centre, and with more convenient traffic on the Asian side of the city compared to the all-day dense traffic on the other side, we have also been the choice of 30% of passengers who live on the European side according to the independent research recently executed.

anna.aero: What is your view on the planned new ‘mega-airport’ for Istanbul and how might it impact your own plans for growth?

Bugday: We acknowledge that there are major limitations to growth at Atatürk airport, and Istanbul needs more airport capacity to develop further as a world-class city. Turkish Airlines has grown quickly in recent years and has an impressive global network, but to grow its hub further it needs a larger airport. We fully support the development of the new airport, planned for the north of Istanbul on the European side. But we don’t see it as a threat to our own growth. Our terminal is designed to handle up to 25 million passengers and we fully expect to handle some 18 million passengers this year.

anna.aero: airBaltic moved its Riga flights from Atatürk to SGIA this weekend, and Transavia.com started a new route from Rotterdam, to complement its existing Amsterdam and Eindhoven services. Is this because you are a lower cost airport or because of growing congestion at Atatürk?

Bugday: We are not a low-cost airport but a full service airport embracing a full range of airlines and passenger profiles with our services. Our airport charges are similar, though possibly a little cheaper than at Atatürk. The main reason that airBaltic moved to SGIA is for operational reasons. The on-time performance of flights from our airport has been 95.4% in 2012 and this figure reflects the short ground-time availability which is one of the most important factors for airlines to lower costs. We hope that other foreign carriers may also consider this in the years ahead.

anna.aero: Is the rate of Turkish air traffic growth sustainable?

Bugday: Last year Turkish airport traffic grew by over 10%. This is well ahead of the economic growth in Turkey which was around 4%, and is partly explained by the growth in connecting traffic (+30%) that Turkish Airlines achieved at Atatürk. Being outside of the Euro zone has certainly helped economically, and the country has a rapidly growing, youthful, middle class that has embraced air travel.

anna.aero: Istanbul is one of three remaining cities in the running to host the summer Olympics in 2020 (against Madrid and Tokyo). What are your thoughts on this?

Bugday: Being awarded the Olympic games would be great news for Istanbul. We are a fast-growing international city and we want the world to be more aware of what we have to offer. The Olympics would also act as a great motivation for getting on and completing some of the infrastructure projects that are currently being developed. The decision will be made in September and I hope it will be good news for Istanbul. 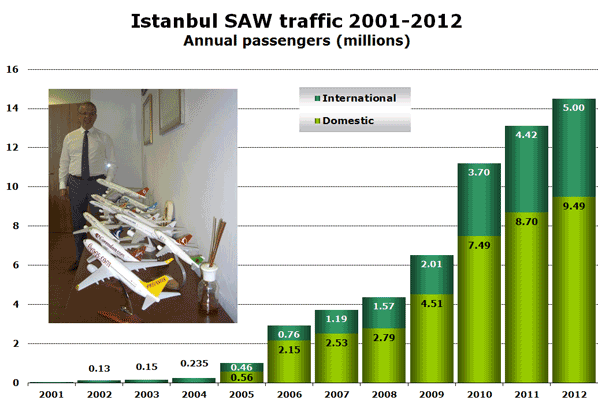 Istanbul’s second airport has grown from virtually nothing to almost 15 million passengers in just eight years. The airport expects to handle around 18 million passengers in 2013. According to OAG schedule data for the week beginning 8 April, the airline’s biggest customer, Pegasus Airlines, is currently serving 27 domestic and 38 international destinations from the airport, with further new routes to Barcelona and Nuremberg set to launch this summer.