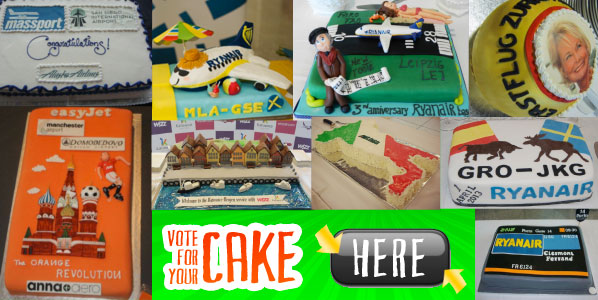 From 245 route launches we have selected 17 stunning cakes for our Cake of the Week Summer Seasons Part 1 public online vote. These include one baked by the anna.aero publisher´s wife for easyJet´s new Manchester to Moscow service.

For many airlines and airports, last Sunday, Easter Day, heralded the start of northern hemisphere “summer season”, although for our readers in the southern hemisphere the on-set of dark nights and winter beckons, as well as seasonal reductions in weekly rotations on numerous services. As a result, many of world’s airlines use the change of operational seasons as the opportunity to inaugurate (what they consider) this year’s hottest new routes for business and leisure travellers alike, with the introduction of more than 450 new routes over the next three weeks (notably, down from 526 last year). With the Easter vacation (29-31 March) coming very early this year, some airlines have pulled route start dates forward in order to capture holiday getaway traffic.

anna.aero’s database of new services starting in the period 26 March to 15 April currently shows a decent haul of 458 new routes launching, with Ryanair alone accounting for nearly 90 of them, #1 again as it was in each of the last five years, just over three times as many as the next airline, Norwegian. Ryanair’s new routes include the opening of four new bases across Europe in Croatia (Zadar), Greece (Chania), the Netherlands (Eindhoven) and Poland (Kraków), plus inaugural flights to five new destinations — namely Kalamata and Zakinthos in Greece, Rabat in Morocco, as well as Jönköping and Kalmar in Sweden. Fast-growing LCC, Norwegian, is opening its London Gatwick base, while Southwest Airlines is continuing to take over routes from AirTran Airways, as the restructuring of the two carrier’s networks continues to be refined following their merger. 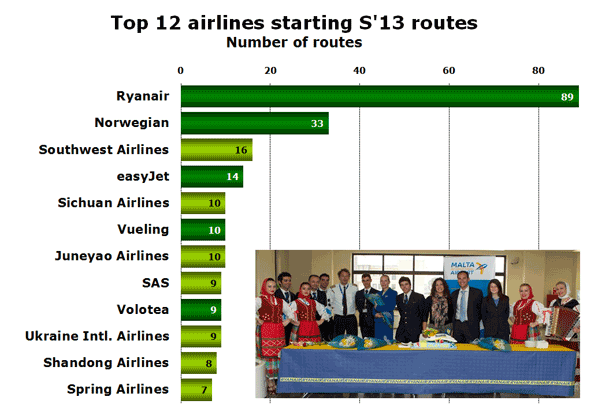 The Top 12 airlines starting new services during this period is not completely dominated by European LCCs, with four Chinese carriers (Juneyao Airlines, Shandong Airlines, Sichuan Airlines and Spring Airlines), a US LCC (Southwest Airlines) and a European flag carrier (SAS) thrown into the mix. For clarity, seasonal, summer-only re-start of routes, which are often claimed as being ‘new’ by airline propagandists (PR managers) are not counted by anna.aero in this analysis.

Hangzhou Airport is the primary beneficiary of the growth from three of the four top Chinese airlines (Juneyao Airlines, Sichuan Airlines and Spring Airlines), with more than one-third of the 35 routes being started in China having one end of a city pair in the capital and largest city of Zhejiang Province in Eastern China. Other significant base launches include the landmark opening of Turkish Airlines’ new operation at Istanbul Sabiha Gökçen – the opening of which was witnessed by anna.aero.

US just edges out China

Analysis of the 458 new routes by country reveals that of the 916 airports involved in the new routes, nearly 200 are almost equally split between the United States and China, with the five main European markets of Italy, the UK, Spain, Germany and France mustering nearly one-third of the city pairs. Spain, which was #1 country market this time last year, has clearly suffered from the country’s current economic malaise, tumbling to fifth place this time out. 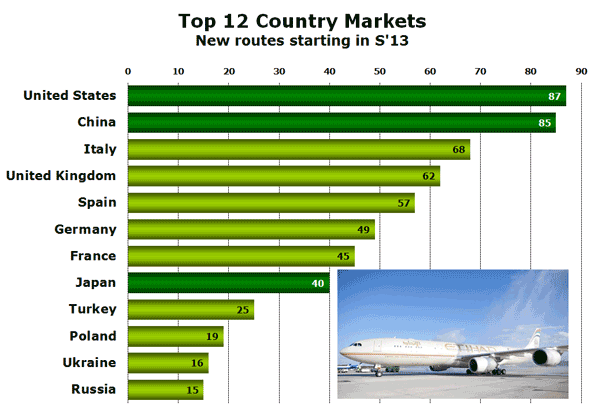 The top 12 countries for new routes contain just three non-European countries (highlighted in dark green) led by the United States (thanks to Southwest, American Airlines and United Airlines) and followed closely by China, and then Japan.