Airbus regains #1 position over Boeing, as the two score the strongest March ever Malaysia Airlines' CEO, Ahmad Jauhari Yahya, his Board of Directors and senior managers, celebrated the arrival of the airline's sixth and last A380 almost exactly a year since the airline took delivery of its first Superjumbo. For Airbus, this aircraft marks a major milestone, as it's the 100th A380 since deliveries started in August 2008.

After a fairly slow February, both Airbus and Boeing stepped up their deliveries in March of this year, improving on the last year’s results by 19 units. With the total aircraft deliveries standing at 64 and 55 respectively for the two manufacturers during the third month of the year, both companies have had the best March since anna.aero began monitoring aircraft deliveries in 2008. Compared with March 2012, Airbus delivered 17 more aircraft, while Boeing handed over two airframes more. 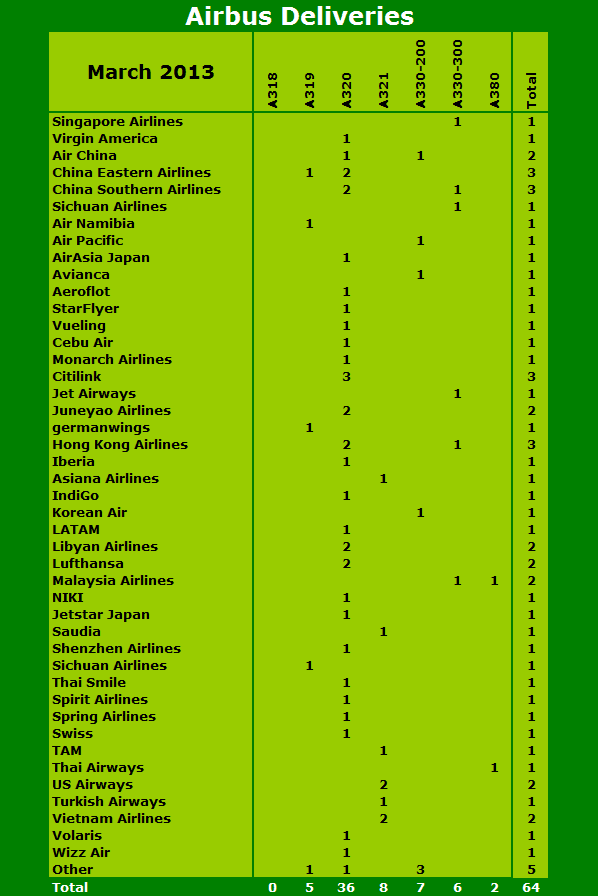 Airbus closed the month with a total of 64 delivered units, which constitutes 19 units more than the amount delivered in February 2013, and 17 more than in March last year. In the first quarter of 2013, Airbus delivered 144 units, an increase of 10% on the same period of 2012.

Once again, deliveries in March were led by the A320 family, with a total of 49 single-aisle jets provided to airlines worldwide. Indonesia’s Citilink and China Eastern Airlines were the largest recipients of narrow-bodies last month, as they took three A320-family aircraft each. A total of 36 airlines received new narrow-bodies from Airbus last month, including several that took delivery of two units.

15 wide-bodies were delivered in March, nine more than in the preceding month, including the delivery of the 100th and 101st A380s, to Malaysia Airlines and Thai Airways respectively. Another notable delivery last month was that of first A300-200 by Air Pacific. The airline, which is soon to revert to back to the Fiji Airways brand, was recently analysed by anna.aero. Another Malaysian carrier, Malindo Air, the JV of Lion Air and the National Aerospace and Defense Industries of Malaysia, took delivery of the 7,500th 737 every built. 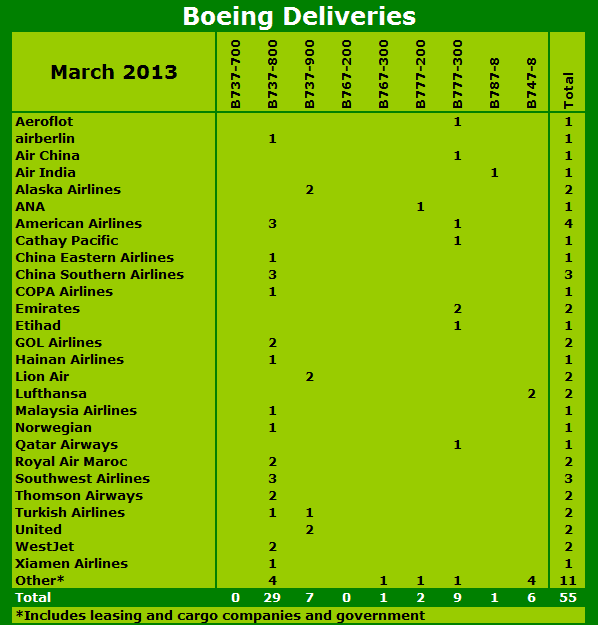 Boeing closed March with a total of 55 units delivered, 12 more than in February and two more than in the same month of 2012. Boeing’s total for the first three months of 2013 is 137 aircraft, exactly the same last year.

Airlines received a total of 36 narrow-bodies from the American air framer, two more than in the preceding month. American Airlines, China Southern Airlines and Southwest Airlines each received three 737-800s, while further six carriers took delivery of two narrow-bodies. This includes Alaska Airlines, Lion Air and United Airlines, each of which saw two 737-900s join their respective fleets. Other highlights include Malindo Air taking the delivery of the 7,500th 737 and China Eastern receiving the 1,000th Boeing aircraft in China.

While ten more wide-body units were delivered in March 2013 than in February, the US air framer also improved its year-on-year performance, delivering four units more than the 15 it managed in March 2012. While no 747-800s were delivered in February, in March two units of the type were delivered to Lufthansa. Emirates was the only other airline to take delivery of more than one wide-body unit, as it saw two 777-300s join its fleet. Our data elves were unsure as to whether Air India did actually receive the single 787-8 it was planned to receive in March, given the ongoing strife Boeing is having in re-securing the airworthiness of this airframe. Boeing and China Eastern Airlines celebrated the delivery of the 1,000th Boeing aircraft for China. The 1,000th airplane, a Next-Generation 737-800 with the Boeing Sky Interior and painted in special peacock livery, will join China Eastern's Yunnan Airlines.