And the Cake of the Week winner is… Using the power of Facebook, the winning entry saw InterSky, Zürich and Salzburg Airports encourage their combined 30,000 fans to vote for their cake. It was a close run competition all week, but the InterSky route finally defeated the challenges mounted by new services from Wizz Air and Ryanair.

With 29% of the votes, InterSky’s new 18-weekly route between Zürich and Salzburg, started on 31 March, served-up the winning cake in the biggest week of route launches in 2013. The champion confectionary, inspired by the traditional Austrian Mozartkugel cake, was a special “Moser-kugel” version, featuring the face of the airline’s founder and MD, Renate Moser (who was also celebrating her birthday). Victory was secured with both airports and the airline mobilizing their combined 30,000 Facebook fans to vote for the cake.

Not too far behind, with 26% of the vote, was the Bergen waterfront cake created for the launch of the Wizz Air twice weekly operation from Katowice, which began on 28 March. In a more distant third, with a tally of 15%, was Ryanair’s Malta to Gothenburg City route, with twice weekly flights beginning on 1 April. 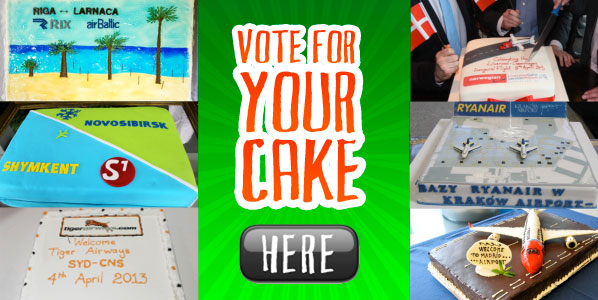 As we did last week, the job of deciding the fates of airline and airport PR and marketing teams around the world through their success or failure in our Cake of the Week competition with you – our airline and airport network planning community. From this week’s 153 route launches, our data elves have selected eight more spectacular cakes for our Cake of the Week Summer Season Part 2 public online vote. Click here to view them all.

The rules are the same as last week…just gain the most votes to win. Facebook fans, Twitter followers, plane spotter groups, encourage them all to vote on your behalf in order to secure the win and the long-term career prospects of your colleagues from PR and marketing.