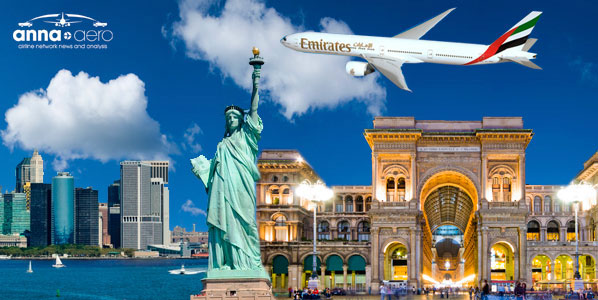 In typical Emirates Airline fashion, its arrival on the Milan-New York city pair with daily 777-300 services will shake up a market that already offers four daily flights with incumbents Alitalia, American Airlines, Delta Air Lines and United Airlines. This start-up reverses a negative trend in the seat and frequency volume of North American services flown from Europe by non-European airlines.

When Emirates Airline launches its daily 360-seat 777-300 on 1 October in the already congested Milan Malpensa to New York market by extending one of its current thrice-daily Dubai services, it will instantly become the number one carrier in terms of seat capacity. Having gained permission on an extra-bilateral basis from ENAC (Italian CAA) to sell seats on the route pair for an evaluation period of 18 months, and complementing the carrier’s existing double-daily direct operations to New York from Dubai, Emirates will immediately command 28% of the Milan-New York traffic and an equal share of one-fifth of the daily frequencies.

This is not the first time that Emirates has operated via Europe to the US. Between November 2006 and March 2008 the airline flew a daily New York JFK service through Hamburg, using 777-300s initially, and then A340-500s, according to Innovata data. Like many route culls, there was never any official announcement from the airline why the service was terminated, but with no feed at the US end at the time, and with alternate direct flights to New York available to Dubai passengers, both factors may well have contributed to the failure.

This time around, Emirates will enjoy feed at the US end, through its reciprocal interline and codeshare agreement with JetBlue Airways, although the MEB3 carrier uses Terminal 4 at New York JFK, while the US carrier’s hub operates from Terminal 5. Emirates will also look to maximize its frequent flyer partnership with easyJet in Milan, which offers 47 destinations from its Italian hub come July. These factors may prove critical for the long-term survival of the new transit operation.

Looking at the current non-European airlines flying North American services from European points for this summer, the number of weekly services stands at 45 with just over 14,000 weekly seats being offered by six airlines. The MEB3 carrier’s arrival into this sector will see the number of weekly flights increase by 16%, while weekly seat capacity will rise by 18%.

However, this capacity is a far cry from the same month five years ago, when 10 airlines offered 98% more weekly flights (89) and 105% more weekly seats (nearly 29,000). New York remains the most popular point, with around 50% of seats in July 2008 and in July 2013 – although the number of seats being offered to the Big Apple has halved, with airlines like Air India, Malaysia Airlines and Qatar Airways among those no longer offering these types of stopping services.