Sun Country Airlines, #4 airline at Minneapolis/St. Paul in terms of annual passengers, launched new routes to Tampa, FL and Huatulco in Mexico in late-December 2012. The carrier is continuing to re-build its passenger volumes at the Minnesota airport following the economic downturn which saw it lose 50% of its annual traffic, reaching 1.2 million in 2012, but having previously been as high as 1.5 million in 2007.

Located approximately 16 kilometres from both Minneapolis and Saint Paul, Minneapolis/St Paul Airport served 33.2 million passengers last year, placing itself as Minnesota’s largest airport and the 16th busiest in the US. However, the annual growth rate of 0.2% is slightly below the national average and passenger traffic figures, hit by the economic downturn in 2008, have stalled at the 2003 level. However, in the first two months of 2013, the airport recorded a 1.9% growth and the analysis of capacity data from Innovata for upcoming months indicates, that the airport is all set to reach 34 million passengers this year. 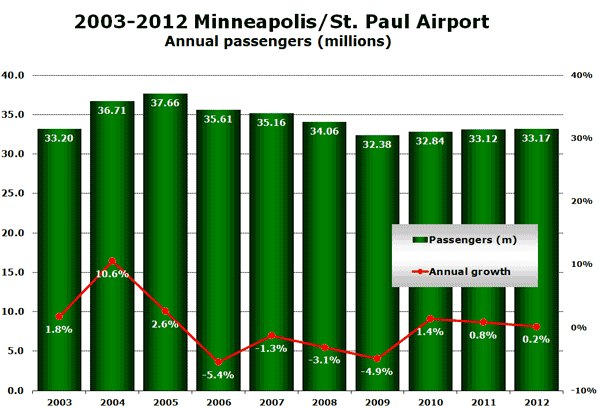 Delta has three quarters of the market

A total of 135 routes are operated by just 13 serving airlines. Delta Air Lines dominates at the airport with around 77% of total passenger volumes and offers flights to 122 domestic and international destinations. At 2,806 weekly frequencies, Minneapolis/St Paul is the airline’s third busiest hub, after Atlanta Hartsfield-Jackson and Detroit Metro.

In spite of their leading positions, both Delta and United Airlines have recorded a decline in annual passenger numbers last year. United’s traffic figures are down by 5.2% in 2012, as compared to the combined pre-merger 2011 results for both United and Continental Airlines. Furthermore, the examination of Innovata data for April 2013 shows a further 7% reduction in the carrier’s seat capacity. This suggests that in 2013, Southwest Airlines (which offers 32% more seats April 2013 compared to the same period of 2012) could overtake United as #2 at Minneapolis/St Paul.

Notably, Sun Country Airlines, previously the fastest growing airline at Minneapolis/St Paul, lost more than 50% of its passenger traffic during the economic downturn, and its current figures are still well below the airline’s all-time peak in 2007, when it handled 1.5 million passengers through the airport.

Data published by US RITA BTS shows that the average for one-way domestic airfares for travel originating in Minneapolis/St Paul was 15% higher than the US national average the first three quarters of 2012. Consequently, the airport was ranked the fifth most expensive out of the 50 largest US airports. This is not a surprise, as Delta fulfils monopoly conditions on 92 routes in April 2013; in 21 city pairs it faces a single competitor, while on just nine routes the airline has to contend with two or more competitors. There are only five routes which are dominated by an operator other than Delta – Charlotte-Douglas (US Airways has 60% of seat capacity), Chicago Midway (Southwest: 65%), Chicago O’Hare (United: 32%), Dallas/Fort Worth (American Airlines: 48%) and Lansing Capital City (Sun Country: 59%). 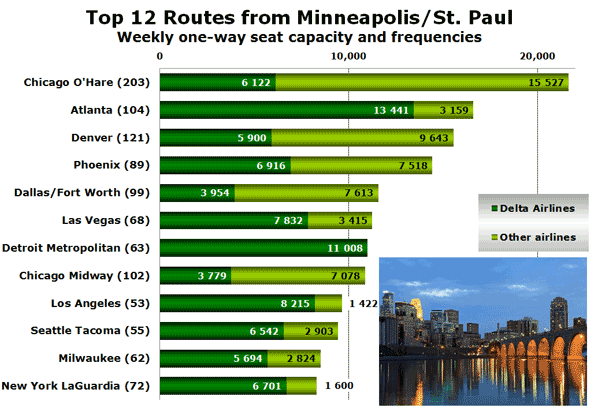 The arrival of Spirit Airlines to Minneapolis/St Paul created some havoc last summer, resulting in other airlines increasing their respective seat capacities on all new Spirit’s routes. As a result of this rivalry, the seat capacity to Fort Lauderdale increased by 96.1% (April 2013 vs. 2012), followed by Fort Myers (34.3%), Chicago O’Hare (23.4%), the newly launched Dallas/Fort Worth (20.4%) and Las Vegas (18.4%).  The airline also plans new daily Denver service, scheduled to launch later this month, and an additional daily flight to Chicago O’Hare (May launch).

In 2012, the airport handled 2.2 million international passengers, which accounts only 6.6% of total annual traffic. Currently, there are 15 international routes operated from the airport, eight of which are trans-border services to Canada. Delta operates to the hubs of its two Skyteam Alliance partners, Air France-KLM: Amsterdam is served thrice-daily, while the route to Paris CDG is covered with daily flights. Air France’s new daily service from Paris CDG will compliment Delta’s existing offering from June 2013 onwards. Delta also operates to London Heathrow and Tokyo Narita, both with daily frequencies.