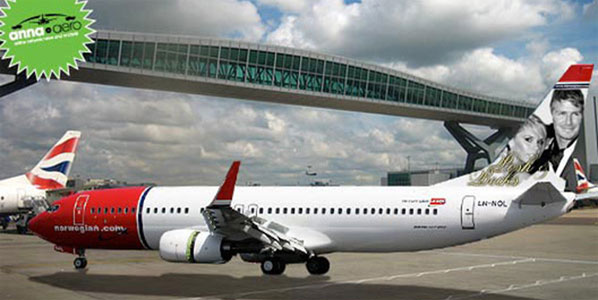 With aircraft now based at London Gatwick we look forward to seeing which famous Brits will be celebrated on the tailfins of Norwegian's 737-800s. Apparently it won't be the Beckhams (shame) as the airline only uses famous folk who are no longer living. This summer Norwegian's network from Gatwick will comprise 25 destinations, and 151 weekly departures.

The start of the summer season has seen Norwegian greatly increase its presence at London Gatwick by basing aircraft at the airport for the first time. This will enable Europe’s third largest LCC (it carried almost 18 million passengers in 2012) to expand its route network from 10 Nordic destinations last summer, to 25 destinations across Europe this summer. Norwegian has been serving Gatwick since October 2007, when it first linked its home base of Oslo to London’s second busiest airport. 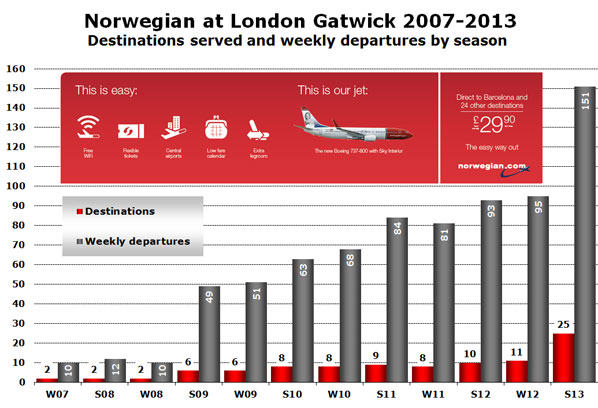 For a while the airline also operated flights at London Stansted (which started in June 2003), but now only operates London routes from Gatwick. After gradually expanding its route network to cover all four major Nordic countries (Denmark, Finland, Norway and Sweden), the decision to base aircraft in the UK means that the airline is now branching out into more typical summer markets for UK travellers, such as France, Italy and Spain. Despite the addition of 13 new non-Nordic destinations, which now make up half of the airline’s routes from Gatwick, these services represent just under 20% of weekly flights for Norwegian.

Foreign airlines setting up bases at London Gatwick is not new. Aer Lingus tried something similar in the summer of 2009, when it began serving Faro, Malaga, Munich, Nice, Vienna, Vilnius and Zurich from the airport. By the following summer, all of these routes, with the exception of Malaga, had been dropped. Ryanair’s presence at Gatwick has been rather erratic in recent years. It currently operates flights from three Irish airports (Dublin, Cork and Shannon), plus the apparently rather random additional pair of Kaunas and Seville.