Two based aircraft and three new routes to begin with: Kraków Airport celebrated the launch of Ryanair’s base. Cutting the ribbon (and the cake!) were Jan Pamuła, the airport’s CEO; and Katarzyna Gaborec, Ryanair’s Sales and Marketing Executive for Central and Eastern Europe. 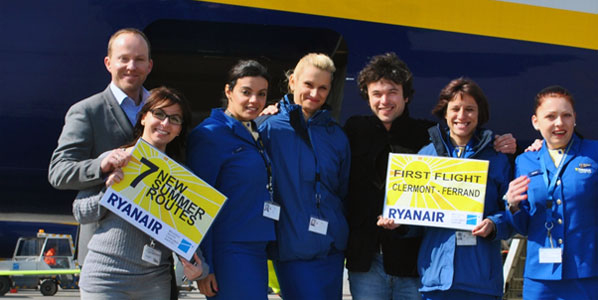 Jonathan Brisy, Ryanair’s Sales and Marketing Manager Belgium and France, helped kick off the summer season at Brussels Charleroi by inaugurating the first flight to Clermont-Ferrand. While the airline launched seven routes last week, only two were genuinely new (the other one being Zakinthos). Welcoming Málaga as Ryanair’s latest destination from Knock, Joe Gilmore, Ireland West Airport’s MD, said: “We are delighted to welcome a new service to Malaga with Ryanair as we expand our range of scheduled services to now include the popular Costa Del Sol. Last year over 100,000 passengers flew on Ryanairs services to Spain and Portugal.”