Ajaccio’s 50% growth in international traffic in 2012 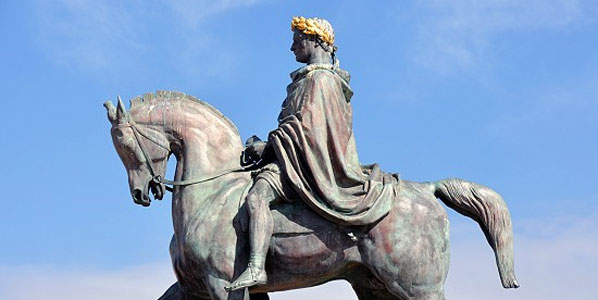 Not only does Napolean Bonaparte’s statue grace the Diamant Square in the old part of the city of Ajaccio, he also gives his name to the Corsican capital’s airport.

First, a geography lesson (for those that need it). Corsica (which we last analysed here at anna.aero in 2009) is located southeast of the French mainland, west of Italy and north of the Italian island of Sardinia, and it is one of France’s 27 designated regions. For an island that measures just 183 kilometres long and 83 kilometres wide, it boasts four international airports: Ajaccio in the west; Calvi in the northwest; Bastia in the north-east; and Figari in the south. However, it is the island’s capital, Ajaccio, the birthplace of Corsica’s most famous son – Napolean Bonaparte, the famous 18th century French military leader (who also gives his name to the airport) – on which anna.aero will focus its analysis.

Overall, Ajaccio’s traffic is growing steadily, with average annual growth of 3.7% since 2007. However, between 2012 and 2011 international traffic was up 48%, to just over 80,000 annual passengers, with new routes to Oslo Gardermoen (Norwegian) and Rome Fiumicino (Air Corsica) more than countering the loss of the route to Barcelona (Regional – now HOP!). In fact, all of the airport’s existing international routes contributed with growth last year, with the star performers being Basel (+82% year-on-year) and Geneva (+42%). 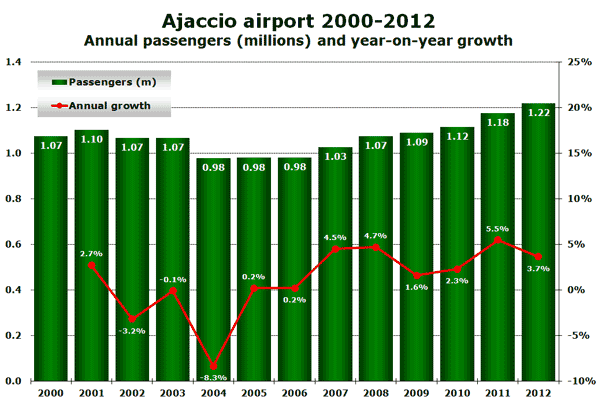 According to April 2013 Innovata data, the leading airline at the airport is Air Corsica, offering 71 weekly flights to six domestic destinations — by August the carrier’s flying programme will have been expanded to 94 weekly flights to eight destinations. In 2012, the airline, which is based in Ajaccio, carried nearly 60% of the airport’s total traffic. Air France, which owns a minority stake in Air Corsica, was in second place, but delivered less than a third of the passenger traffic provided by the #1 airline at the airport. While both of the top two airlines were down in terms of year-on-year passengers, the #3 airline at Ajaccio, easyJet, was up 19% between 2012 and 2011, while newcomer Volotea vaulted straight into fifth spot, delivering nearly 40,000 passengers last year. The LCC launched connections to Nantes (three per week) and Bordeaux (three) in June 2012. Other route launches in Ajaccio in 2012 were as follows:

53% of passengers in four months

Many airports on Mediterranean islands have passenger traffic that is incredibly seasonal, as the inhabitants of Northern Europe descend south during the Northern Hemisphere summer months in search of guaranteed sunshine – and Ajaccio is no different. Indeed, the months of June to September provided 53% of the airport’s annual traffic in 2012. 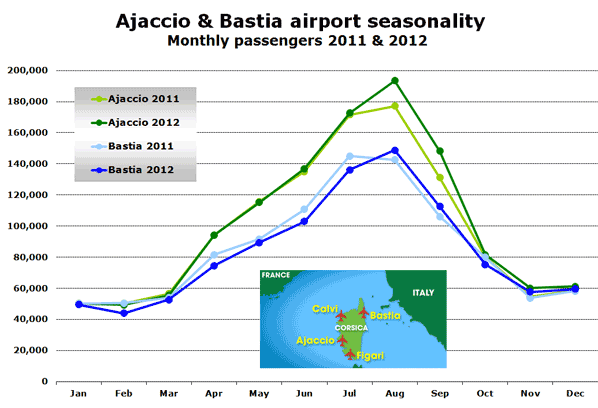 During 2012, monthly passenger flows at Ajaccio peaked at 193,000 in August 2012, but less than 50,000 passengers used the airport in February 2012, representing a huge variance in monthly traffic of 291%. This extreme seasonality has actually worsened when compared to 2011, which posted a variance result of 251%, with the same two months representing the respective high and low in terms of passenger flows. Clearly, while Ajaccio is no doubt grateful for its continued growth, as most of the additional traffic is being added in the peak, it is merely serving to widen the gap in its seasonal variance. As can be seen, the huge seasonal pattern of traffic at Ajaccio, is also mirrored at the island’s second largest airport in Bastia.

More seasonal growth in 2013 from LCCs, and Swiss

The seasonal variance is likely to become worse in 2013, with most of the airport’s new services this year again being concentrated in the busy four-month peak between June and September. anna.aero has identified at least 10 new routes that are planned to start this summer, summarised in the following table. Seven of the 10 routes are domestic with new international services planned to Geneva, Milan and Stockholm.