Last year, Charlotte Douglas International Airport (the ‘Douglas’ refers to a former mayor and not a nearby city) handled over 40 million passengers for the first time in its history, and moved up to ninth place in the ranking of America’s busiest airports in terms of passengers. Dominated by US Airways, the North Carolina airport has seen demand grow by an impressive 79% since 2003 and reported growth of 5.6% last year, well above the average of the country’s top 20 airports, of just 2.2%. 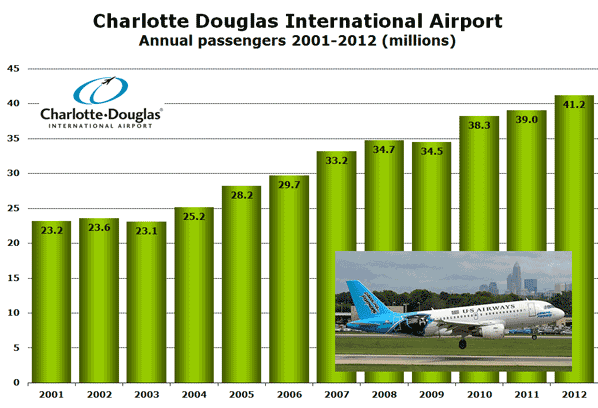 In recent years international traffic has consistently accounted for between six and seven percent of the airport’s traffic, reaching a record level of 2.7 million in 2012. A significant development at the start of the current summer season was that US Airways’ daily London service has been moved from Gatwick to Heathrow.

US Airways still dominant with 90% of flights/seats

Charlotte is US Airways’ biggest hub with around 140 destinations served including over 30 international destinations. Apart from various destinations in Canada, the Caribbean and Mexico, US Airways also operates year-round long-haul services to London, Frankfurt and Paris in Europe, and Rio de Janeiro in South America. A new service to Sao Paulo is slated to start later this summer. In addition, US Airways also serves Dublin, Madrid and Rome on a seasonal basis.

Apart from US Airways, other airlines operating international services at Charlotte are, Air Canada (double-daily to Toronto), Insel Air (weekly to Curacao), and Lufthansa (daily to Munich).

This week, Charlotte became a Southwest Airlines destination for the first time, as the carrier launched daily flights to Baltimore/Washington, Chicago Midway, Houston Hobby and Orlando. At the same time AirTran Airways, a wholly-owned subsidiary of Southwest, ceased operations at the airport. AirTran operated flights to Atlanta, Baltimore/Washington and Orlando. Southwest has decided not to take over the Atlanta service and leave it as a duopoly between Delta Air Lines and US Airways. Southwest’s four routes give it just over 1% of weekly seat capacity, and although it may add a couple more routes to major hubs such as Denver and Las Vegas, major expansion for the carrier at Charlotte currently seems unlikely.

According to the most recent (2012 Q3) US government statistics analysing domestic airfares, Charlotte ranks as the 29th most expensive US airport out of the top 100 for O&D traffic, with average return fares of $401. This is 1.8% up on the third quarter in 2011, but almost 20% less than in 2000. These fares are for passengers starting and ending their journey in Charlotte, which represents only around one-quarter of the airport’s total passengers, as the vast majority are travelling through Charlotte. The appearance of Southwest is unlikely to change this much given the airline’s modest network at the airport, and the fact that it is replacing AirTran, which is also a low-fare airline.

Given its location and apparent profitability, it seems unlikely that the airport will suffer as a result of US Airways’ merger with American Airlines. Of more immediate concern is the on-going debate about the future ownership of the airport. In March, the City Council selected an independent consulting firm to conduct a study of airport governance models and issues associated with transition to a different governance model. The deadline for study completion is 1 May. While the city is keen to remain in control of the airport, neighbouring counties would apparently prefer the airport to be run by an independent authority. 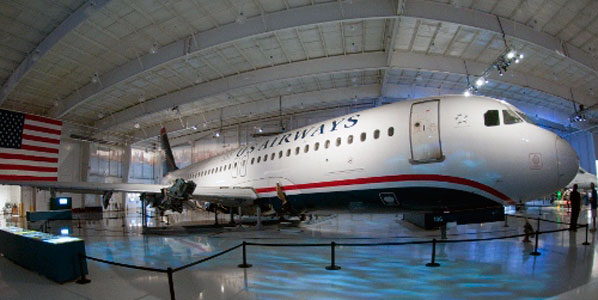 The airport is home to the Carolinas Aviation Museum. The most recent exhibit at the museum is the famous "Miracle on the Hudson" US Airways A320, Flight 1549, which made a memorable emergency landing on the Hudson River back in January 2009. The flight had taken off from LaGuardia Airport in New York and was heading for Charlotte when it suffered a major birdstrike which disabled both engines.