Best Route Launch Cake of the Week, Summer 2013 Season Part 2: Norwegian’s Director of Network Development, Thomas Ramdahl: “This is why we launched those 33 new routes.”

With 1,083 votes counted, the Liverpool cake, baked to celebrate its new Norwegian service to Copenhagen, slaughtered the opposition by grabbing 46% of the public vote, followed by the Madrid Airport cake celebrating yet another Norwegian new route – also to Copenhagen – which took 33% of the poll, giving the Nordic low cost carrier an historic first-ever, first and second position in the bi-annual public vote to decide the Cake of the Week contest.

“For the past five years we have run public votes for the anna.aero Cake of the Week, for the start of the summer and winter seasons – but we’ve never before had a single airline take both first and second place – and, with a recent anna.aero analysis showing Norwegian is the world’s #2 airline for new route launches this summer season with 33 new services for the start of this summer season, we’re all just wondering if we’re heading for a Ferrari-style dominance of this route-launch related contest” said Marc Watkins, anna.aero Editor. 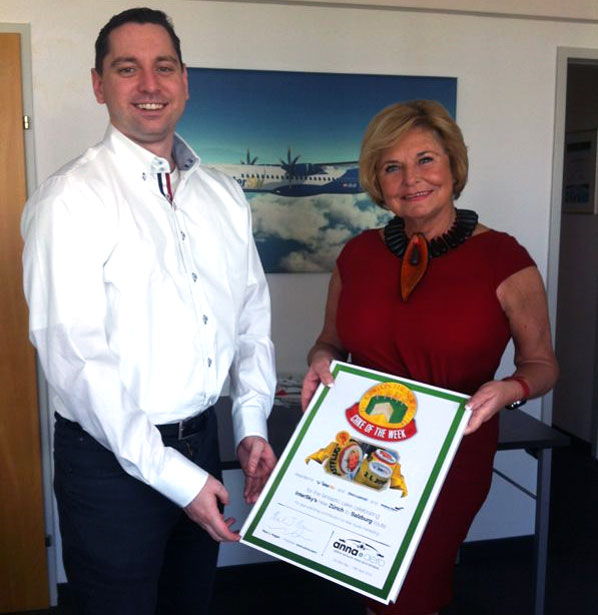 Best Route Launch Cake of the Week, Summer 2013 Season Part 1: Roger Hohl, (left), InterSky Marketing Manager, makes the presentation to Renate Moser, founder and CEO of InterSky: “We will give the prize certificate the best place in our office.”

Meanwhile, the CEO and founder of InterSky has also written to Marc to report her joy at winning the Best Route Launch Cake of the Week, Summer 2013 Season Part 1: “Hallo Marc, we are very proud about winning the Cake of the Week vote! And we will give the prize certificate the best place in our office – by the way I think that I am still the only female having her own airline!”