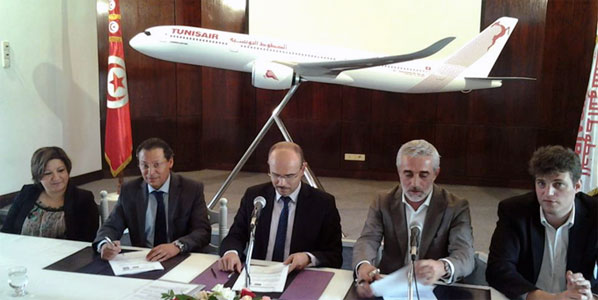 Sitting in front of one of the largest model aeroplanes anna.aero has ever seen, Mr Khaled Chelly, Commercial Director, Tunisair (centre); Mr Philippe Bernat-Salles, President of the French Handball National League (second from right); and Mr Souhayel Turki Gérant of MagrebMedia (second from left), signed an agreement on Tuesday 16 April for Tunisair to be an official sponsor for the next three years of the French Handball National League.

After seeing passenger numbers fall by 14% during 2011, as a result of the ‘Arab Spring’, which resulted in significant social and political change, Tunisia’s national airline, Tunisair, rebounded strongly in 2012 with passenger numbers jumping 20% to 3.82 million. In February, the airline accepted delivery of its latest A320, to grow the fleet to 34 aircraft in total. It joins three long-haul A300s, 11 737s (-500s and -600s), 15 other A320s, and four A319s. According to Airbus data, Tunisair has a further six A320s on order that have yet to be delivered, as well as three A330-200s and three A350-800s. Most of these will be used to replace existing aircraft, many of which are over 15 years old. 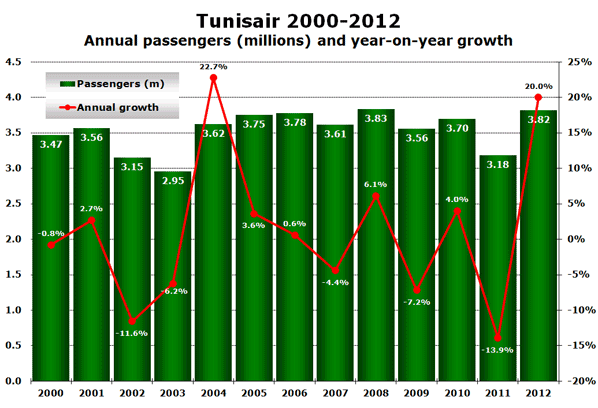 Tunisair’s network is focussed on Europe, West Africa and the Middle East. Analysis of the airline’s scheduled services this summer (it also operates an extensive charter programme) reveals that Paris is the leading destination, and that the airline’s three routes to Paris Orly from Djerba, Monastir and Tunis, account for fully one-sixth of the airline’s total weekly ASKs (Available Seat-Kilometres). 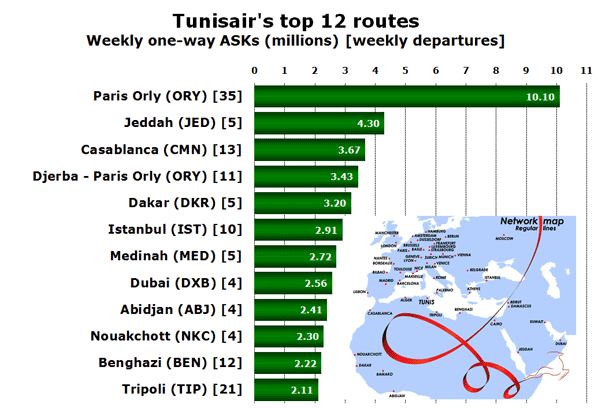 Source: Diio Mi for August 2013. All routes from Tunis unless otherwise stated.

Destinations in Saudi Arabia, Morocco and Senegal join the two Paris routes in the top 5 biggest routes for Tunisair. No other western European destination ranks in the top 12. Not many airlines have two destinations in Libya among their top 12 routes, but Tunisair has double-daily flights to Benghazi, and three flights per day to Tripoli.

The airline has revealed to anna.aero that it has significant plans to develop its hub operations from Tunis. A summary of the new destinations planned in the coming years is shown below:

Flights to Ouagadougou in Burkina Faso began this week, while thrice-weekly services to Bologna in Italy are slated to start on 3 May. Start dates for the other new routes have not yet been revealed. Long-haul flights to Canada are planned to start in 2014, suggesting that that may be when the airline envisages receiving the first of the three A330s it has on order. These will replace the airline’s existing A300s, and will also probably be used to enter the US and South African markets.