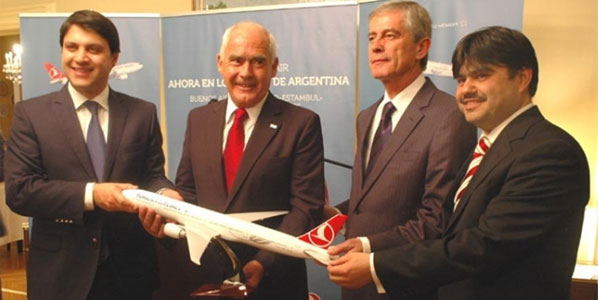 Just before Christmas, Turkish Airlines extended its daily Sao Paulo service from Istanbul on to Buenos Aires, allowing it to serve two destinations in South America. This is still a long way short of the 11 destinations (10 of which are in Brazil) served by TAP Portugal from Lisbon alone.

This summer there will be around 540 weekly non-stop flights from airports in Europe to airports in South America, up about 6% when compared with 2011. According to AEA statistics, its member airlines saw an increase in passengers of 7.2% in 2012, to destinations in the “South Atlantic” region, compared with total passenger growth across all regions of just 2.2%. This week has seen the launch of a new five-times weekly Air France service from Paris CDG to Montevideo in Uruguay, though these flights operate via Buenos Aires in Argentina. This brings to nine the number of destinations served by Air France in South America. The French national carrier is battling with Iberia and TAP Portugal to be the leading airline on flights between Europe and South America. It currently ranks third behind TAP Portugal and Iberia for both weekly seats, and weekly departures, though passes TAP Portugal for second if ASKs (Available Seat Kilometres) are used as a measure. 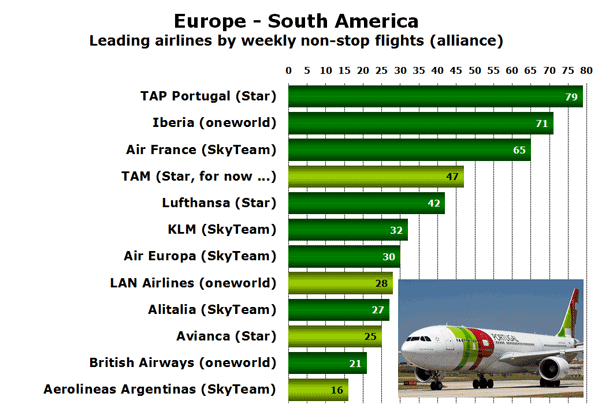 The market is dominated by European carriers (shown in dark green), who account for fully three-quarters of all flights between the two continents. In terms of alliance groupings, the Star Alliance leads the way with 210 weekly departures, followed by SkyTeam (170) and oneworld (120). However, when TAM leaves Star to join oneworld, possibly in early 2014, all three alliances will have almost the same number of weekly flights.

Air France is not the only carrier to serve destinations in South America with one-stop services. Since last December, Turkish Airlines serves Buenos Aires via Sao Paulo, while both Iberia and KLM operate triangle routings from the their home hubs to Quito (in Ecuador), and then on to Guayaquil (also in Ecuador), before returning back to Europe. However, this is more to do with Quito’s altitude and the runway length at the old airport (which closed earlier this year), which prevented non-stop services to Europe.

A total of 24 airports in South America will this summer be connected to Europe by non-stop services. The best-served destination from Europe is Sao Paulo Guarulhos, with 12 airlines operating 129 weekly departures from 13 airports across Europe, followed by Rio de Janeiro, Buenos Aires, and Caracas.

KLM and Lufthansa are fastest-growing European carriers to South America

A comparison with flights on offer between Europe and South America in August 2011, reveals that KLM and Lufthansa have seen the biggest growth in their networks. KLM resumed flights to Buenos Aires, Rio de Janeiro and Quito at the beginning of November 2011, while Lufthansa started Rio services from Frankfurt at the same time, and has increased frequency on its Buenos Aires and Bogota services. Another carrier that has grown its South American network is Air Europa. At the end of November it began non-stop flights from Madrid to Santa Cruz in Bolivia, while in June it will introduce non-stop flights to Montevideo, replacing Iberia which ceased operating the route at the end of this March. Although Alitalia’s South American network in August has remained unchanged since 2011, it did launch twice-weekly seasonal services from Rome to Fortaleza (Brazil) in January. The service terminates at the end of May.

While it might be easy think that all flights between Europe and South America are similar in length, this is not the case. TAP Portugal’s daily flights between Lisbon and Fortaleza (Brazil) clock in at just under 5,600 kilometres, while Air France’s non-stop service from Paris CDG to Santiago (Chile) is more than twice as long at 11,650 kilometres.