airberlin is second biggest carrier in Zurich after Swiss; adding new routes to Cagliari, Naples and Sylt this summer 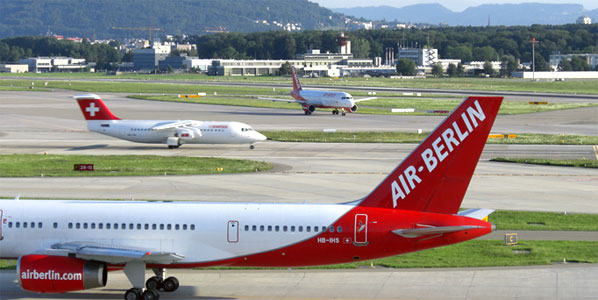 airberlin may be a distant second to Swiss at Zurich airport, but this summer its network (including niki and Belair coded flights) consists of over 30 destinations. This includes new routes to Cagliari (Sardinia) and Sylt (northern Germany), and a resumption of services to Naples.

According to airberlin it has four hubs, which form the basis of its pan-European network. These are Berlin Tegel and Düsseldorf in Germany, Palma de Mallorca in Spain, and Vienna in Austria. During the peak summer month of August, Berlin and Palma are the biggest bases for weekly departures, while Düsseldorf is tops if ASKs (Available Seat-Kilometres) are measured, thanks to the airline’s long-haul operations from that airport. Zurich in Switzerland however, is airberlin’s biggest, non-German, non-hub airport, and ranks eighth for weekly seats this summer (but slips to 12th when ranked by ASKs). Although lagging well behind Swiss, airberlin and its partner airlines (niki and Belair) rank second at Zurich with around 8% of weekly seat capacity. 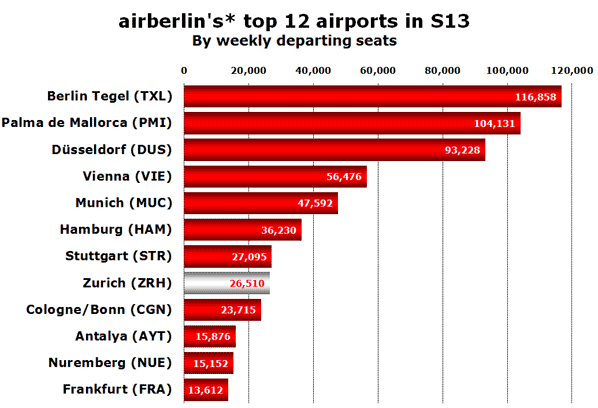 airberlin first began operations at Zurich in early 2003, when it started multiple daily flights from Berlin Tegel and Hamburg, followed by Düsseldorf in November 2003, and Palma de Mallorca and Hannover in November 2004. Between summer 2005 and summer 2008, the number of destinations served increased from five to 25, with the addition of many low frequency, summer-only, leisure markets in and around the Mediterranean and the Canary Islands. 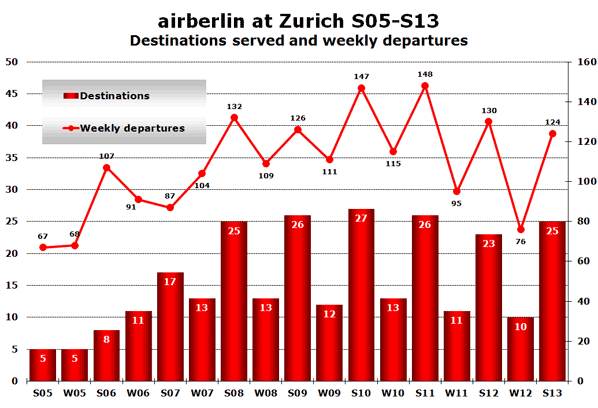 Source: Innovata Data / Diio Mi for February and August each year NB: airberlin coded flights only. Does not include Belair and niki services.

According to Innovata schedule data the number of weekly departures and destinations served peaked in the summers of 2010 and 2011, since when, airberlin has gradually been cutting back services. Hannover flights ceased at the end of the summer 2011 season, while Hamburg flights were stopped at the end of October 2012.

In addition to the 25 destinations served non-stop by airberlin using its own “AB” flight code, it also serves Vienna thanks to its fully-owned Austrian subsidiary niki (flight code “HG”), and several non-EU destinations, such as Antalya, Pristina, and leisure resorts in Egypt, using the “4T” flight code of Belair. airberlin first took a 49% stake in Swiss-based Belair in 2007, before taking complete control in 2009.

This week sees the resumption of services to Naples, a route that was last served by airberlin in the summer of 2010. The route will again be served with two weekly flights, and will be joined in May by two completely new routes. From 18 May, airberlin will be starting twice-weekly flights to the Sardinian city of Cagliari (a destination it also serves non-stop from Düsseldorf and Munich), while on the same day (a Saturday) it will launch weekly flights to Westerland, on the island of Sylt in Northern Germany, using an Embraer E190. This will be Sylt’s only international service this summer. In total airberlin will serve 31 destinations in 10 countries from Zurich this summer.

Of the 159 weekly departures operated by airberlin this summer, 60% are to the airline’s four hub airports of Berlin Tegel, Düsseldorf, Palma de Mallorca and Vienna, with the rest of the flights spread across a flexible network of leisure destinations, with the focus on Greece, Italy and Spain.