Did someone say picture opportunity with Vegas Showgirls? In trademark understated style of all route launches involving Richard Branson, the UK entrepreneur was on hand to welcome the start of his US off-shoot Virgin America’s new 19-weekly A319 service from Los Angeles, CA to Las Vegas, NV. Paderborn now connected to Paddington: The start of six weekly flights from London City Airport to Paderborn-Lippstadt Airport on 22 April by CityJet has erased one of three UK routes that the German airport wanted services to on its Route Shop profile. flydubai’s CEO Ghaith Al Ghaith was on board flydubai’s first flight to Juba on 16 April, and was welcomed by the Vice President of the Republic of South Sudan, Dr Riek Macha Teny, at the Presidential terminal. 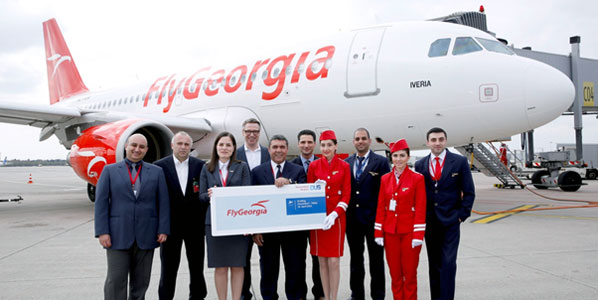 The inaugural Royal Air Maroc service from Zurich to Casablanca was celebrated by (left to right) Peter Grünig, Head Aviation Marketing, Zurich Airport along with Mourad El Kanabi, Vice President Europe & Switzerland, Royal Air Maroc and Mohamed Balbacha, Chargé d’Affaires, Royal Embassy of Maroc in Berne. Despite the delicious buffet and drinks for all passengers and invited guests, anna.aero confirms it will not be starting a ‘Couscous of the Week’ competition. The launch of services by Volotea to Corsica from Brest was welcomed by the familiar water arch on 20 April. On the apron with the aircraft’s crew were (right to left): Andre Jourt, VP Brest CCI, and Philippe Morel, Brest Airport Operations Director. The airport gave away cakes on the launch: anna.aero thought that this was a great way to increase the airline’s ancillary revenue (better than marketing support), as these Corsican Canistrelli can be a bit dry (though excellent), so much so that soft drinks sales must have rocketed on the aircraft.