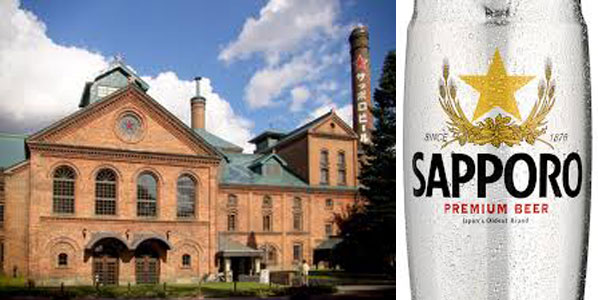 The Sapporo Beer Museum is located in the Sapporo Garden Park in Sapporo, and is the only beer museum in Japan. However, the world-renowned Sapporo beer is brewed in five locations across Japan and the company that makes it – Sapporo Breweries – is Tokyo-based.

Battling it out with Fukuoka Airport to be Japan’s third busiest airport (behind Tokyo Haneda and Tokyo Narita) is Sapporo Chitose Airport, which serves the largest city on the northern Japanese island of Hokkaido and is the fourth-largest city in Japan by population. Other than hosting the Winter Olympics in 1972, the city is perhaps best known for its beer, however the world-renowned tipple is not exclusively brewed in the city (it is brewed in four other locations in Japan) and Sapporo Breweries is actually headquartered in Tokyo. 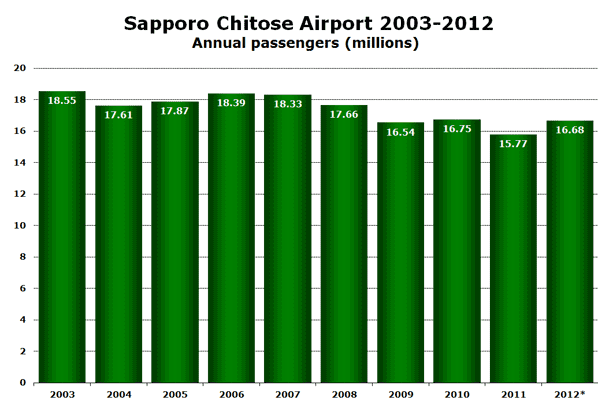 Source: Japan MLIT and ACI. *anna.aero estimate based on annual seat growth between 2011 and 2012

Having dipped below the 16 million annual passenger mark during 2011, in 2012 Sapporo Chitose should have returned to the annual passenger levels experienced in 2008 and 2009, given the 6% seat growth between 2011 and 2012, taken from Innovata data. This means that the airport has some way to go before it again reaches annual passenger numbers delivered in 2003.  However, looking ahead to potential 2013 throughputs, by using the number of seats available in May 2013 versus those available in May 2012 as a benchmark, this would seem to suggest annual growth of nearly 10%. On this basis, the airport will certainly break through the 17 million passenger mark in 2013, and may even get close to 18 million again.

With 458 weekly flights and nearly 132,000 weekly seats, the route from Sapporo Chitose to Tokyo Haneda (one of the world’s biggest) has not been included in the following graph given the fact it is over three times the size of the next largest route (in terms of weekly flights). In fact, nearly one third of all weekly flights from the largest airport on Hokkaido go to Haneda. Despite Haneda’s dominance in the Sapporo-Tokyo market, Jetstar Japan and AirAsia Japan, both added new flights to Tokyo Narita during 2012. 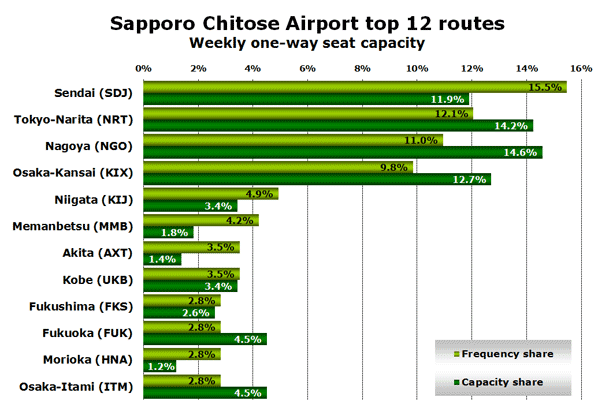 All of Sapporo Chitose’s top 12 routes are domestic connections, with the biggest international routes, to the regional points of Seoul Incheon and Taipei Taoyuan, and both operated with 16 weekly frequencies, being the closest cross-border services to breaking this dominance. However, if the destinations were to be ranked in terms of weekly seats, then both of these routes would appear in the top 12, as nearly one-third of flights to Seoul are with Korean Air wide-bodies, whereas all 16 weekly flights to Taipei are flown by China Airlines and EVA Air wide-body aircraft. Notably, the airport is yet to be served by any of the MEB3, but must surely be on their respective route shopping lists.

LCCs command over one-third of capacity

In terms of individual airline capacity, All Nippon Airways (ANA) leads the way, and when combined with its regional subsidiary, All Nippon Network, produces over one-third (33.7%) of flights from Sapporo Chitose. Over the last five years, the two airlines have grown their combined capacity by 13% at the airport. When Japan Airlines and its subsidiaries – JAL Express and J-Air – are grouped together, the oneworld behemoth leapfrogs Air Do into #2 place, with nearly 67,000 weekly seats. However, it has clearly felt the squeeze of the encroaching LCCs more than ANA, and has cut its weekly seats at the airport by 22% over the last five years. 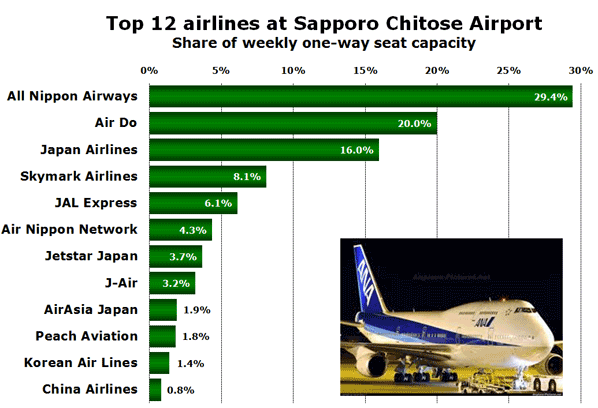 When comparing the top 12 airlines serving Sapporo Chitose in May 2008 versus those using the airport in May 2013, the insatiable march of LCCs is marked. In May 2008, there were just two low-cost airlines in the top 12 – namely Air Do and Skymark Airlines – and together they controlled 18% of the weekly seats at the airport. Next month there will be five LCCs in the top 12, offering nearly 36% of weekly seats. In this period, Air Do has grown at Sapporo Chitose by 85%, whereas Skymark, which has incidentally launched flights from Sendai this week, has grown by 131% over the last five years.