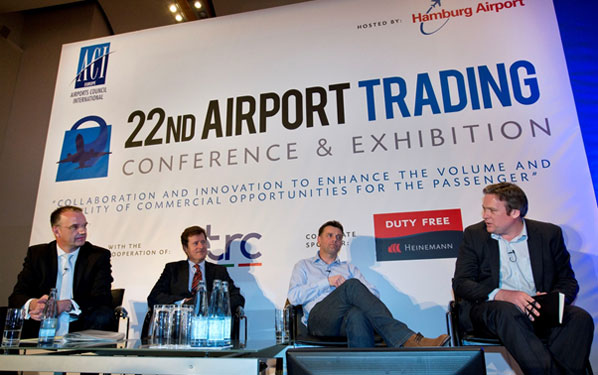 Hungry airports are bending over backwards to find (legal) means to attract airlines with minimal charges, shared marketing costs, and PSO deals etc. But airlines on the polar-opposite of the spectrum, including Lufthansa and Ryanair, seem to agree that airports are missing a real possibility: To cooperate with airports to build and share airport retail revenues.

It’s a simple principle: Airlines possess 100% of the data on flyers – email, gender, what credit card they use and, crucially, which two airports they will be visiting on any given trip.

In contrast, airports only know who is flying in far more general terms – unless the traveller has pre-booked parking – a rapidly increasing trend, but still a far less precise method of data capture than the comprehensive detail possessed by airlines.

As the airlines have the data, and the airports have the great shops, it does not take a genius to work out that both parties separately possess all the tools they need to work together to promote offers.

Ken O’Toole, the Chief Commercial Officer of Manchester Airports Group – and therefore responsible for both aviation development and the retail which brings in the remaining 48% of MAG’s revenues – is also the former Ryanair Director of New Route Development, so he knows very well what’s at stake by any notion of cooperation or sharing precious retail income: “If I said I was nervous I would not be understating it – we want to protect these revenue streams, while engaging with the airlines.” 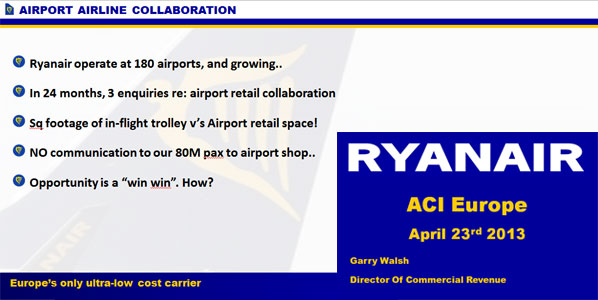 Best slide from the show (by Ryanair’s Garry Walsh, Director of Commercial Development): “We have 180 airports in the network and countless others knocking on the door to get a Ryanair route – yet in two years I have had only three vague approaches to consider retail cooperation”.

Of course it’s only right for airports to be terrified of airlines like Ryanair finding yet another new way of squeezing money out of them. As O’Toole points out – “airport retail is vital precisely because airport charges paid by airlines are already well below the cost of the infrastructure they use.”

But, clearly it makes sense to at least explore moving beyond the zero cooperation between airports and airlines to see if they can create BRAND NEW retail revenue streams. “We have 180 airports in the network and countless others knocking on the door to get a Ryanair route – yet in two years I have had only three vague approaches to consider commercial cooperation,” said Ryanair’s ancillary revenue boss Walsh, who thinks he has a lot to offer from 80 million real customers and 290 million unique visits to the Ryanair website. “Do we have a plan? No. Do I have an interest? Yes.”

Airports and leading airport retailers assembled in Hamburg had mixed feelings about the idea. When asked for his opinion, World Duty Free’s Fred Creighton was particularly scathing about the idea and could not see a roadmap to progress until one giant roadblock is cleared – the ‘one-bag rule’ which has caused very specific damage to retail, and much resentment among passengers who have been stripped of their liquor and chocolate, or forced to pay for an extra bag at more than face value of the purchase.

Walsh was not in a position to offer any kind of resolution to this profound disagreement, but he felt that: “focusing on the one bag rule as the obstacle to moving forward means focusing on the problem and not the opportunity.” 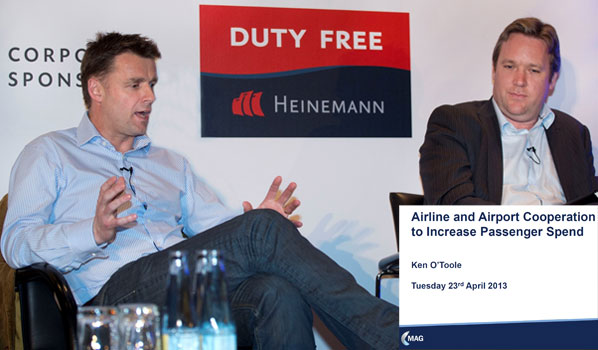 Ryanair’s ancillary revenue boss Walsh and ex-Ryanair O’Toole – now custodian of Manchester Airport’s routes and retail. “Its going to take some thought to find that middle ground on airline-airport cooperation to increase passenger spend – but MAG is willing to try.”

Filip Soete, Marketing Director Nice Côte D’Azur Aéroport, a former Chairman of the ACI EUROPE Commercial Forum and who, like O’Toole, controls a portfolio spanning both aviation development and retail, also spent some time working on airport-airline retail initiatives. “Sharing is a sensitive and complex challenge –it’s a tripartite issue, not only involving airports, but also the concessionaires with whom we have existing agreements, but I agree that it something that should be explored – everyone is looking at everyone else to see who will make the first step.” 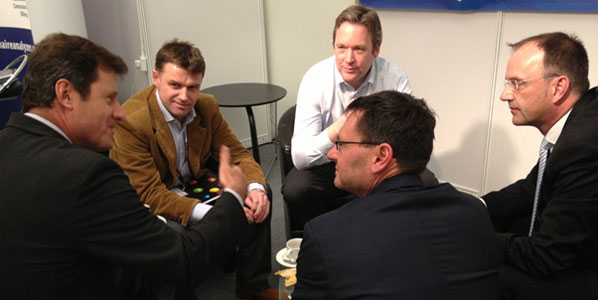 In a huddle: The participants in the ACI EUROPE Airport Trading Conference discussion “Airline-Airport Cooperation to Increase Passenger Spend” – Bordeaux, Ryanair, Manchester and Lufthansa. If the process of going forward started here, it may be called the “Hamburg Protocol.”

So what should be this “first step?”

In listening to the debate, anna.aero agrees with O’Toole that airports would be foolish to offer airlines the chance to slice and cannibalise their cherished retail revenues. Instead efforts should definitely be focused on the unanimous agreement that the average retail spend per passenger is still vastly below potential – less than $9, even at Rolex-selling London Heathrow – and therefore the “first steps” should be trials and pilot schemes for specific products and services, or promotions which can clearly be identified as “new spending.”

As a big fan of chocolate gifts (and cakes), anna.aero thinks that one idea would be create a special box of chocolates which is only promoted on the airline confirmation emails and boarding passes. If it sells, then the airline-airport cooperation plan to increase passenger spend would be shown to make some sense. Ken O’Toole says it is “blue skies thinking”. But if this initiative amounts to an increase of just 10 cents per passenger that would be worth $8m specifically from Ryanair’s contribution – or $80 million from traffic across Europe.

While there was not clear agreement on how this collaboration should work in Hamburg, there was willing from both sides. So it was announced that the 2014 ACI EUROPE Airport Trading Conference, being hosted by Zurich Airport next spring, would focus on reaching actual practical solutions and would undoubtedly become the event where airports and airlines meet and advance real means to enhance “Airline-Airport Cooperation to Increase Passenger Spend.” 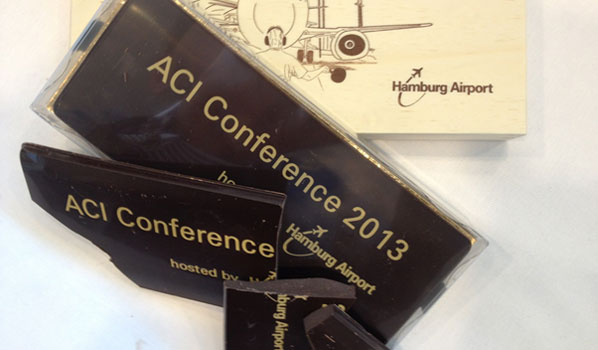 Is this the best conference gift, ever? Delegates to the ACI EUROPE Airport Trading show hosted by Hamburg Airport were each given this 70% minimum cocoa solids souvenir bar of chocolate. Forget paperweights or glossy 5kg hardback books about the history of the airport – this is a proper gift, second only to actual hard currency in usefulness. anna.aero says: “Why not make special bars of chocolate like this, and promote them through airline confirmation emails and on boarding passes – resulting sales would provide indicators of whether there was any life in efforts for airline-airport cooperation to increase passenger spend.” 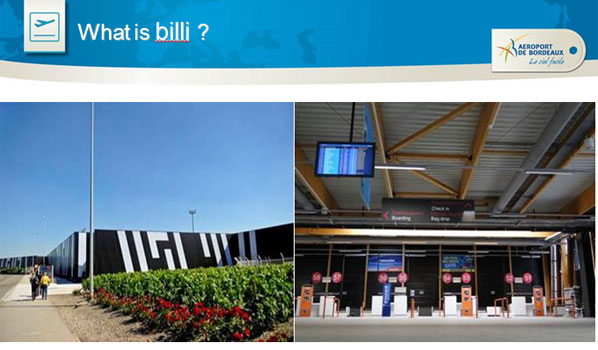 Jean-Luc Poiroux, Commercial Development Director of Bordeaux, says that one of the effects of the amazingly cheap-to-build €4.5 million billi low cost terminal has been to double retail spend per passenger, massively compensating for the lower airport charges. Poiroux also says the vineyard in front of the billi terminal produces around 1,000 bottles of “really good wine.” anna.aero says: “Experiment! Ask an airline partner to sell this wine as a special promotion via airline ticket sales Jean-Luc!”