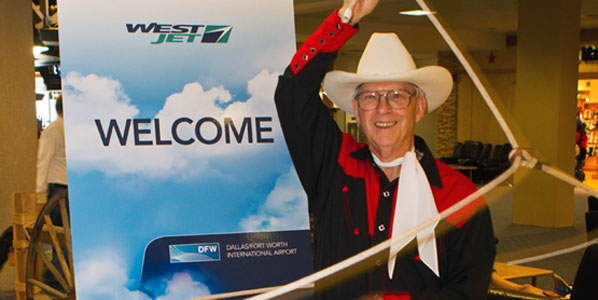 Situated in the foothills of the Canadian Rockies, Calgary is perhaps best known for its annual rodeo, the Calgary Stampede or “The Greatest Outdoor Show on Earth” – held every July and which sees nearly one million people flock to the largest city in the province of Alberta. Offering the fifth largest metropolitan area in Canada, with just over one million inhabitants, Calgary became the first Canadian city to host the Olympic Winter Games in 1988.

Calgary to stampede past Montreal

Calgary is served by Canada’s fourth largest airport, with annual passenger traffic closing in on 14 million, with the airport itself predicting on its website that if it maintains its current 2.9% monthly growth rate (taken from the first two months of 2013 data), it will just sneak past the 14 million mark come December 31st. With a gap of just over 150,000 annual passengers between it and the #3 airport – namely Montréal-Pierre Elliot Trudeau International Airport – and a faster growth rate in 2012 (6%), the next 12 months could see the two rivals switch positions. This would seem to be a likely event, as Calgary’s 2013 growth rate of 2.9% so far, is outstripping that of its Quebec-based cousin, which has had a flat start to first two months of the year, posting passenger growth figures of -0.8%. 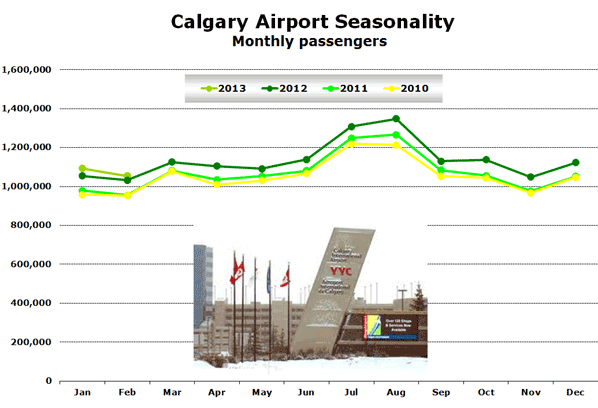 Most airlines prefer flat seasonal variations in passenger demand, as it is then easier for them to plan their annual capacity over the year. From now on (monthly airport data permitting), anna.aero is inaugurating its new Seasonal Variation in Demand (SVID) calculator in its airport profiles – which will hopefully become the industry benchmark for measuring airport seasonality. To calculate your airport’s SVID score, click on the button below to use our new SVID calculator. With a score of 0.89 for 2012, placing it in the excellent category, and beating airports like London Heathrow and Frankfurt, Calgary has set a standard for others to follow.

Calgary’s top 12 routes see connections to three airports within the province of Alberta, including the 250-kilometre hop (in Canadian terms at least) up the Calgary-Edmonton Corridor to Edmonton (plus YMM and YQL). The remainder of the top dozen city pairs cover three destinations in British Columbia, including the #1 route to Vancouver (plus YLW and YYJ), two to the Province of Saskatchewan (YQR and YXE) and two internationally to the US (IAH and ORD), and with one apiece for Ontario (YYZ) and Manitoba (YWG). 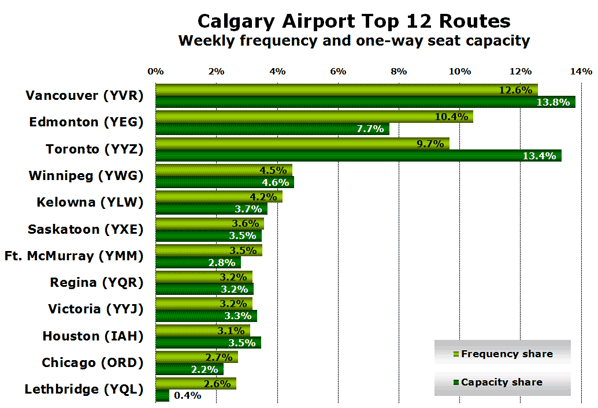 Weekly flights to Chicago have increased by nearly 60% in the last 12 months, resulting in the US airport moving up from eighteenth spot in May 2012, to eleventh this May. Not only did the incumbent on the route, United Airlines, increase its weekly schedule from 26 to 34 flights in that period, but WestJet has also started daily operations on the city pair too. Conversely, Air Canada/Jazz Air’s weekly services to Saskatoon have been slashed versus the same month in the previous year, trimmed back from 39 weekly flights to 26, with WestJet maintaining it four times daily operation. However, despite the frequency cull, the national carrier’s seat capacity has fallen back by less than 1%, as its 50-seat CRJ flights have been replaced by the larger capacity offered by its 74-seat Dash-8 Q400s.

Following on from its entry into the Calgary-Chicago market last year, the Calgary-headquartered WestJet has continued its US expansion drive from its second most important hub (marginally behind its Toronto operation) just this week, following the introduction of a daily run to Dallas/Fort Worth beginning on 29 April. The airport will also be a focal point for the LCC’s new regional subsidiary, WestJet Encore, which launches on 24 June this year, and will inaugurate operations to three new destinations from Calgary this summer too.