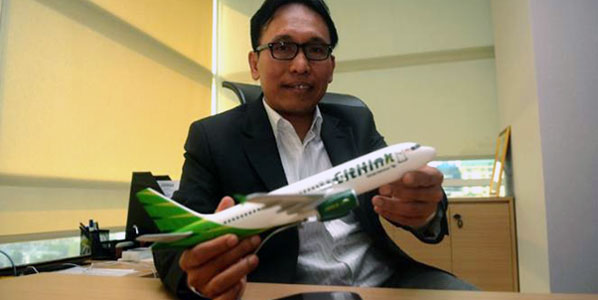 Agus Irianto, Citilink’s VP Sales and Distribution, recently signed a multimillion dollar order with Airbus and is open about the airline’s expansion plans: “We are going to be much more aggressive in terms of route development in 2013 and plan 100 new routes”. 25 A320neos will help the airline grow even more in the future.

Founded back in 2001 as Garuda Indonesia’s experimental alternative low-cost airline, Citilink has experienced mixed fortunes over the years, largely depending on the situation within Garuda’s mainline operation. Finally, in mid-2011, Garuda Indonesia announced the plans to spin-off Citilink. Just over a year later, the LCC became a fully independent business entity, with its own management, branding and callsign. An anna.aero analysis published shortly before this happened, shows that Citilink delivered much of its growth potential in the first half of 2012. Compared to the same period in the preceding year, the airline posted a 42% growth in passenger figures, up to 1.6 million. This rate of growth was then further increased, and Citilink closed 2012 with 3.8 million passengers transported (+49% change vs. 2011).

Dynamic growth in Citilink’s passenger figures reflects the situation in the Indonesian market as a whole. Some airlines (like Sriwijaya Air, which doubled its capacity this April compared to the preceding year) are booming, others (like Batavia Air) are less fortunate and have disappeared from the market. This does not seem to scare Citilink’s management, which has already started 12 new routes since last summer season, including last week’s launch of services from Jakarta to Malang in East Java, and plans to reach a total of 100 new services this year.

Surabaya is the largest airport; Jakarta catches up fast

According to data provided by Innovata, in July 2013, Citilink will operate services at 15 Indonesian airports, providing 157,000 weekly seats and 800 weekly frequencies. The second half of 2013 will also see the arrival of the first five of the 25 ATR-72s ordered by Citilink in December 2012, and the airline’s entry into a number of smaller density markets is expected. 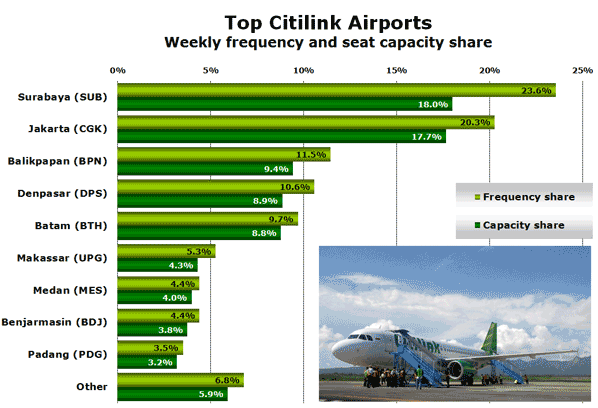 Before this happens, Indonesia’s third-busiest airport, Surabaya, is Citilink’s main centre of operation, with 24% of weekly frequencies and 18% of capacity. However, Jakarta is a close contender, and as the airline’s route launching activity this year seems to revolve around the Indonesian capital with six routes launched in April already, it is likely that Surabaya will soon have to give up its leading position.