Montenegro sees passenger growth of 8% in 2012; Ryanair announces first flights to Podgorica will start in June 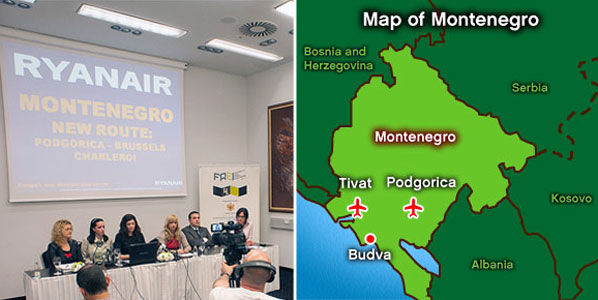 Maria Macken (centre), Ryanair's Sales & Marketing Manager for UK, Ireland, Cyprus and Central Europe, was in Budva last week to announce the airline's first ever flights to Montenegro. Joining her at the press conference were Mirel Radić Ljubisavljević, Deputy Minister at the Ministry of Transport and Maritime Affairs; Olivera Brajović, Deputy Minister at Ministry of Sustainable Development and Tourism; and Ivan Kusovac, Assistant Director at Public Enterprise Airports Montenegro. Twice-weekly flights from Brussels Charleroi will start this June, while flights form several Ryanair bases to Tivat could begin next summer.

Last week, Ryanair announced that Montenegro would become the 29th country served on its pan-European network, when it launches flights from Brussels Charleroi to Podgorica in June of this year. Since our last look at Montenegro’s airports and airlines in June 2011, the country has seen air passenger growth of 10% in 2011 and 8% in 2012. Last year, the country’s two commercial airports, at Podgorica (TGD) and Tivat (TIV), handled 1.36 million passengers, up almost 40% in just three years. 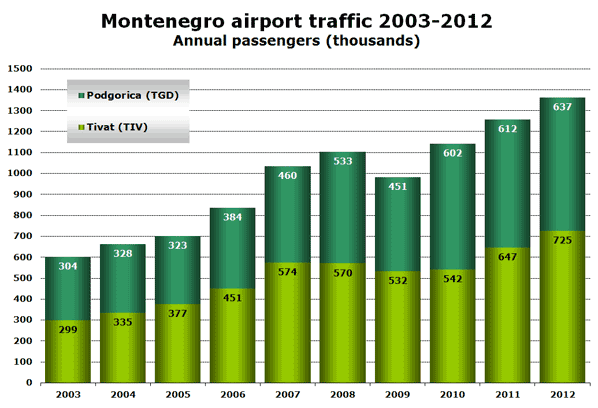 Tivat is closer to the country’s tourism regions (such as Budva), and hence the airport’s seasonality profile is more extreme. In addition to a range of scheduled services, Tivat also attracts many charter flights, especially from Russian carriers. 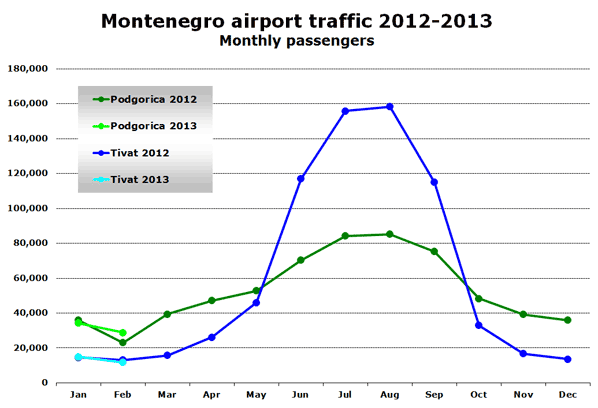 Although Ryanair is initially only serving Podgorica, it apparently plans to serve Tivat in 2014 from Barcelona, London, Milan and Stockholm, although all of these routes are likely to be served on a seasonal basis.

The country’s national carrier, Montenegro Airlines, currently operates a fleet of five Fokker 100s and three Embraer E-195s, all of which are equipped with between 100 and 120 seats. An additional Embraer E-190 is expected to join the fleet in early 2014. According to data from ERA, the airline saw scheduled passenger numbers grow by 6.9% in 2012 to 546,600. Average load factor for the year was 71%. Scheduled destinations served this summer are:

According to the airline, it carried a total of 601,000 in 2012 (including charter passengers), up 6% on 2011, despite operating 7% fewer flight hours. This indicates that Montenegro Airlines was responsible for around 44% of the passengers passing through the country’s airports.

While none of the MEB3 carriers currently serves Montenegro, Turkish Airlines does offer daily flights to its major Istanbul hub from Podgorica. Apart from Alitalia’s imminent service, the only other foreign carrier offering flights to a major hub is Austrian Airlines, which has daily flights to Vienna, also from Podgorica. As noted in our analysis a couple of years ago there are currently no scheduled services from Air France, British Airways, Iberia, KLM, Lufthansa or SAS.