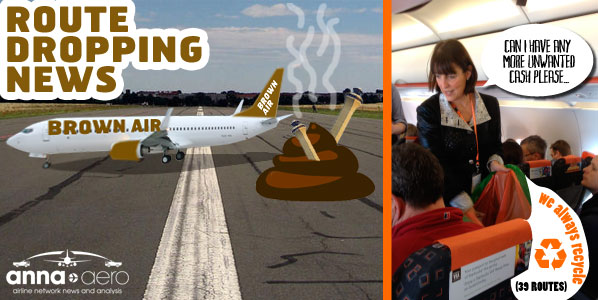 Don’t panic. Modern LCCs are meant to analyse their least performing routes, then axe them, and re-allocate the capacity to more profitable route prospects. In this case, the loss of 39 routes is more than compensated for by the addition of 64 new routes this summer.

Airlines constantly monitor the financial performance of individual routes, and sometimes this can lead to the decision to cease operating a particular airport-pair. This releases capacity that can either be used to increase frequency on existing routes, or creates an opportunity for a new route to be started. Analysis of easyJet’s network this summer, and comparing it with last summer, reveals a total of 39 airport-pairs that are no longer part of the orange network. These are summarised in the following table.

easyJet had announced last year that it would be cutting back its operations in Madrid, and 14 of last summer’s routes will no longer be served this year. The airports to lose the next most number of routes are Liverpool (five), followed by Barcelona and Dortmund with four each. Of the five dropped Liverpool routes, only one (Malta) is served by easyJet from its nearby base at Manchester. In total, 37 airports have lost at least one easyJet service. Out of these, only La Coruna in Spain no longer has any easyJet services.

All but five routes still served by other carriers

Among the 39 routes just five are not served by at least one other carrier this summer. Three of these routes are from Liverpool (to Brussels, Gibraltar and Tallinn), plus Dortmund – Thessaloniki, and Madrid – Heraklion. A total of 19 airlines will benefit from easyJet’s decision to withdraw from these routes, with Iberia losing a competitor on 11 routes, and Ryanair facing reduced competition on nine routes. Spanish carriers Air Europa and Vueling will also have reasons to be pleased. The following table shows which airlines benefit, and how many routes are affected.

The loss of 39 routes is more than compensated for by the addition of 64 new routes resulting in the number of easyJet flights increasing by 2.2% in August. Thanks to the growing number of A320s in the fleet the number of seats on offer is up 2.8%, while ASKs (Available Seat Kilometres) are up 3.1%, indicating a small increase in average sector length.