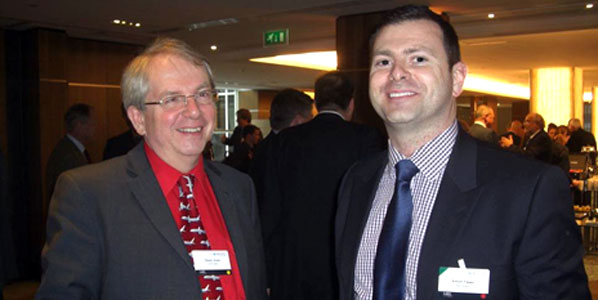 anna.aero's Chief Analyst, Ralph Anker, caught up with Aer Arann's Chief Commercial Officer, Simon Fagan, at the recent ERA Regional Airline Conference in Edinburgh. The airline has recently extended its franchise agreement with Aer Lingus to 2022, and will be operating more Aer Lingus Regional flights than ever this summer.

anna.aero: Can you bring us up to speed on some of the recent developments at Aer Arann?

Simon Fagan (SF): 2013 is a milestone year for the airline. A ‘New Beginning’ is well underway, which commenced in December 2012, following the successful restructuring of the business. The airline is now on a strong financial footing, which provides a solid platform for immediate growth. Firstly, the franchise partnership with Aer Lingus has been expanded and extended out to 2022, allowing Aer Arann to operate under the Aer Lingus Regional brand for another ten years. The fleet will be upgraded over the next twelve months, with deliveries of brand new ATR 72-600 aircraft from May 2013. Dublin flights to Birmingham and Manchester will be added to the Regional network from 1 June 2013, via supplementary frequencies to the existing Mainline services. If that wasn’t enough, Aer Lingus Regional will migrate all Dublin operations to the new Terminal 2 from 1 May 2013, which sees all Aer Lingus flight numbers under ‘one roof’ for the first time since the new terminal opened, thus greatly enhancing the Regional customer experience and offering a seamless connectivity product from the UK to the US.

anna.aero: What changes have there been in your network this summer compared with last summer?

SF: Summer 2013 is our largest programme to date. A capacity of 1.1 million seats will be flown from April to October 2013, with a 25% increase in Dublin operations over summer 2012. New services to Birmingham and Manchester will commence from Dublin on 1 June and 1 July respectively, with Aer Lingus Regional now providing a shuttle-like service to all the major UK cities from Ireland. Combined with the existing Aer Lingus Mainline services to Manchester and Birmingham, the additional Regional frequencies will result in a significant increase in frequency to two of the busiest routes on the Ireland – UK network. Dublin – Birmingham will increase from three to six services per day and Dublin – Manchester grows from three to five per day from 1 July. It is expected that the additional frequencies will add 450,000 extra seats by the end of next year, bringing the Regional route network to 24, with 550 flights per week.

Increased frequencies have been added on all trunk routings from Dublin, such as Bristol, Cardiff, Edinburgh and Glasgow. Passengers to and from Scotland will benefit from increased frequency between Glasgow and Edinburgh and Dublin, with services increasing to six-a-day on each route from 1 July. Birmingham, Edinburgh, Glasgow and Manchester will effectively now be served every two hours from Dublin.

The enhanced schedules facilitate seamless transatlantic connectivity, allowing customers on Aer Lingus Regional services from the UK to clear US Immigration and Customs in Dublin, ahead of their transatlantic journey, thus arriving in the US as a domestic passenger.

anna.aero: What additional changes do you envisage to your network in the next 12-18 months?

SF: Effectively, more of the same expansion. We are currently evaluating a number of potential new routes to the UK and continuously optimising our aircraft integration plans to add additional frequencies on all our key routes. We look forward to deploying the brand new ATR 72-600s on the network throughout 2013 and we are also working closely with both Cork and Shannon airports to establish new opportunities to the UK in 2014. 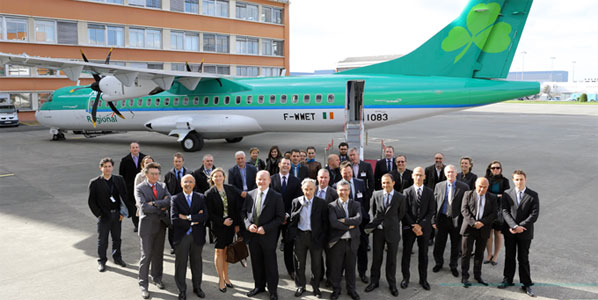 Aer Arann recently took delivery of its first ATR 72-600, with seven more to follow in the next 12 months. The airline celebrated the event on the apron at Toulouse Airport.

anna.aero: What is your current fleet size and what changes do you envisage in the next couple of years?

anna.aero: How many passengers did you carry in 2012 and how does this compare with 2011?

SF: Aer Arann carried 1,047,600 passengers in 2012, which was broadly in line with 2011. Charter passenger volume was approx 2,300, which included the Irish International Rugby Team and both the Munster and Connacht provincial rugby teams. Aer Lingus Franchise passenger volumes increased by 32% in 2012 and we are on target to grow total passenger numbers by approximately 10% in 2013.

anna.aero: What proportion of your traffic is connecting traffic at Dublin?

SF: Transatlantic connectivity is a significant and growing portion of the Regional business model. Throughout 2012, Aer Lingus Regional facilitated over 50,000 passenger journeys between the UK and the US, which represented approximately 9% of our total volume at Dublin Airport. With the significant increases in frequency to Glasgow, Edinburgh, Cardiff, Bristol, Birmingham and Manchester throughout 2013, connecting volumes are expected to almost double to 100,000 passengers, which will represent up to 14% of the business at Dublin.

anna.aero: What are the major challenges that Aer Arann faces in 2013?

SF: To accept delivery of eight new aircraft in as many months is a significant undertaking for any airline, not to mention a Regional. The Aer Arann team are fully committed and working extremely hard to launch the new routes, grow passenger numbers, deliver excellent on-time performance and enhance the experience for all our customers … hopefully, we will get a minute to enjoy the challenge and pause for a bit of fun in the process.

Our strategic objective is set to double our passenger numbers to over two million by 2015 and we are confident that we have the fundamentals in place to join Europe’s top tier of regional airlines in that timeframe.